Aamir Khan Opens Up About Starring In Viswanathan Anand’s Biopic, Gets A ‘Weight Gain’ Joke From The Grandmaster

No one can beat Aamir Khan when we talk about perfection. Be it his acting, prep for a particular character, or dedication towards his projects, he, in every sense, is Mr Perfect of Bollywood. How can we all forget him getting into the skin of Mangal Pandey and Mahavir Singh Phogat? Well, embrace yourselves, fans, as you might see the actor donning the character of yet another amazing personality. This time he might be seen as the five-time world chess champion Viswanathan Anand.

In a press conference in 2019, Viswanathan himself confessed that if his biopic is ever made then Aamir would be the best actor to play his role. After this, there were rumours that the actor was approached for the same. But nothing concrete was ever spoken after that. But now it looks like Khan has opened up about the same. Keep scrolling further to know more.

Recently, a famous Indian stand-up comedian, Samay Raina, held a zoom meeting and invited many big names from several fields. The participants included Aamir Khan, Viswanathan Anand, and others. In one of his questions directed to Khan, Raina asked him if he was ever offered the biopic of the world chess champion, and if he would take the lead role?

Aamir Khan laughed at this question and replied, “That is one of the easiest questions to answer. It would be not only an honour to play Vishy, but it would be highly exciting to get into his mind. When I play a character, I try to understand a person’s mind, and Vishy is a real person; I would obviously spend a lot of time with him to understand how his mind works. And I would understand from his wife and family how his mind works, and then hopefully, I will surprise Vishy when I play him on-screen. If and when that happens, and I would look forward to it.”

Viswanathan too joked at the end, saying, “I promise I wouldn’t put you in that situation where you would have to gain weight for your role.” This left everyone in splits. Check out the discussion below: 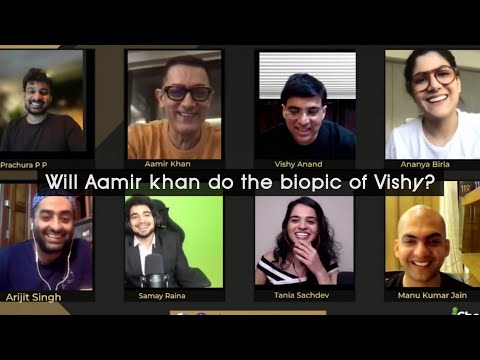 How excited are you to watch Aamir donning the role of Viswanathan Anand if that ever happens?

CarryMinati Says Shooting For Mayday Was ‘Therapeutic’ Amid Lockdown Anxiety

Gauahar Khan: “Do Not Regret Why Producers, Directors Are Not Considering Me For Lead Roles”

Paul Marshal On Working With Madhuri Dixit: “I Really Wish To Choreograph Something Really Big For Ma’am Very Soon”