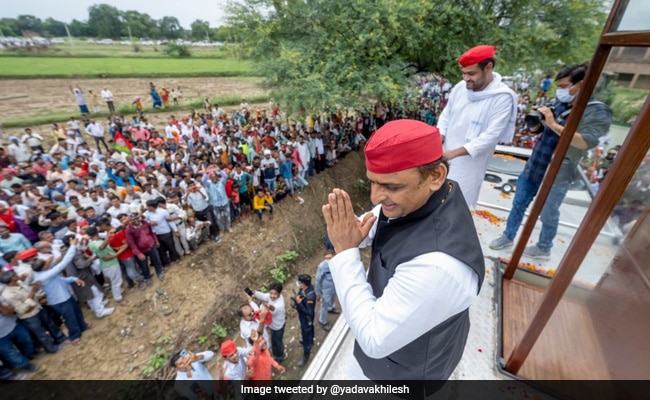 Samajwadi Party chief Akhilesh Yadav on Sunday said doors of his party are open to all small parties for an alliance ahead of the Uttar Pradesh Assembly polls next year and he will try that all such political outfits come together to defeat the BJP.

He also asked the Congress and the BSP, which have been attacking the Samajwadi Party (SP) on various issues, which side they are on.

“These parties should decide whether their fight is with the BJP or SP,” Mr Yadav told PTI.

On possible alliances for the upcoming state polls, the SP president said, “Doors of our party are open for all small parties. Many smaller parties are already with us. More will come with us.”

In an interview to PTI, he also lashed out at the Centre over the Pegasus spying row.

“They (NDA) have over 350 seats in the Lok Sabha. The BJP is ruling in many states. Why and what was the government trying to find through snooping? They are helping ”videshi takatein” (foreign forces) with this act,” Mr Yadav said.

Asked about his uncle Shivpal Yadav’s Pragatisheel Samajwadi Party, which is also preparing to contest the polls on all seats, Mr Yadav said, “We will try that all parties unite to defeat the BJP.”

On ‘Bhagidari Morcha’ led by Om Prakash Rajbhar’s Suheldev Bhartiya Samaj Party (SBSP) in which AIMIM leader Assaduddin Owaisi also took part, he said, “There have been no talks with them till now.”

The SP president also asked the other opposition parties, the Congress and the Bahujan Samaj Party (BSP), to decide which side they were on. “These parties should decide whom they are fighting,” he said.

BSP chief Mayawati has often targeted the Samajwadi Party in her tweets. While accusing the BJP of using government machinery to ensure its victory in the recent panchayat polls, she had said these “tricks” were similar to the methods used by the previous SP government.

Congress chief Ajay Kumar Lallu has also attacked the SP and had said the party leader’s statements reflected frustration and disappointment as people have rejected them.

About caste conferences, including Brahmin Sammelans, organised by BSP and other parties, Akhilesh Yadav said SP also used to arrange such meetings.

“Our backward sammelans and other such meets are on. Before the start of the second (Covid) wave, the party had done three-day camps covering 150 assembly constituencies.

“The party will be taking out a yatra on August 5 on the birth anniversary of party ideologue Janeshwar Mishra. From August 15, more yatras will be taken out exposing the BJP misrule,” he said.

The SP leader also criticised the handling of the COVID-19 situation by the BJP-led state government during the second wave and the much touted “Yogi model” of dealing with it.

“The government was a complete failure. People died for lack of oxygen, beds and medicines. Everyone has seen the situation of hospitals and crematoriums. Which model is this? People have seen it closely and they will be replying to the BJP at an opportune time,” he said.

Taking a dig at the ruling BJP, Mr Yadav said the saffron party has not seen its own 2017 election manifesto in which it talked about doubling income of farmers.

“The BJP has not created any infrastructure in the past over four years. During the Covid crisis, whatever we developed in the SP regime was used. They made a university in the name of former prime minister Atal Bihari Vajpayee. It is functioning on the ninth floor of the Ram Manohar Lohia Medical Institute made under our regime,” he said.

“BJP MLAs themselves are not happy with the cleaning of Ganga, price rise, among other issues,” he added.

When asked when will the party declare its candidates for the assembly polls, Mr Yadav said, “We still have time. The process is on.

After discussions and analysis, right candidates will be announced.”

Meanwhile, the former UP chief minister asserted that his party will win 350 seats in the polls.

“The resentment is brewing among people and they are waiting for a chance to uproot the BJP in the state. The 350-figure is realistic and with development work done in our regime, people are now realising that they made a mistake in 2017 and were fooled by the BJP with lies,” he claimed.

On the Pegasus snooping row, Mr Yadav said this is a matter of national security and the government is helping foreign forces with such an action.

“The BJP calls itself nationalist. Is this not the matter of national security? Are they not traitors themselves? The government is involved in snooping and even judges were not spared. They have hollowed out the democracy. It is well known that the Centre is misusing institutions to target political opponents,” Mr Yadav added.

About the ongoing farmers protest against the Centre’s new farm laws and the agitators’ plans to reach Lucknow, he said, “SP is with them. We all are farmers and do not want them to lose their land to capitalists. We will fight for them.”

When asked what would be the election issues for the party, he said youth, development and welfare of all sections of the society, will be the primary focus.

He added that if the SP is voted to power, the services of ‘Shiksha Mitra’ (adhoc primary teachers) will be regularised and that all other appointments held up by the BJP government deliberately will be cleared.

“This government has made the appointments complex, we will find solutions to it,” the SP chief said.

Previous articleProfits of Saudi Fransi jump 76% in the second quarter to 770 million riyals
Next articleNetflix: 5 best Netflix shows to watch in August 2021