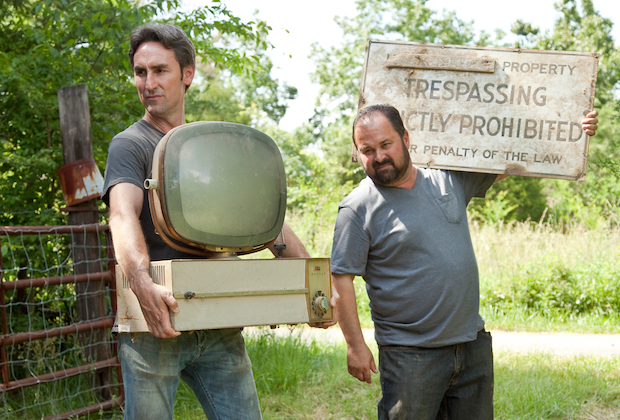 Fans of American Pickers have seen the last of Frank Fritz.

Who’s In? Who’s Out? TV’s Major Casting Moves for Fall (and Beyond!)

EW.com reports that there are no plans for Fritz to return to the long-running History Channel series, which he had co-hosted alongside Mike Wolfe since it first premiered in 2010.

Fritz’s last episode aired in March 2020. He did not return for the series’ most recent batch of episodes, which were filmed amid the ongoing coronavirus pandemic, citing back surgery and ongoing complications from Crohn’s disease. Meanwhile, Fritz tells UK tabloid The Sun that he and Wolfe have fallen out of touch.

“I haven’t talked to Mike in two years,” Fritz said. “He knew my back was messed up, but he didn’t call me up and ask how I was doing. That’s just how it is.”

Fritz also suggested that Wolfe’s ego had much to do with their falling out. “The show is tilted towards him 1,000 percent,” he said. “I can’t even bend that far down to show you how much. That’s fine. It’s like you’ve got Aerosmith and there’s Steven Tyler and he’s the front man. I found my spot, I’m second and he’s number one on the show. That’s no problem with me, maybe he does have a problem.”

He also alleged that Wolfe has been lobbying to bring his brother Robbie on as a replacement — but a History Channel rep maintains that there are no plans to introduce a new host.

Wolfe, meanwhile, tells TMZ that he will miss Fritz.

“I will miss Frank, just like all of you,” he said in a statement. “I pray for the very best and all good things for him on the next part of his journey.”

Are you disappointed that Fritz will not be returning to American Pickers? Sound off in Comments.

Loki 2: Chris Hemsworth Is Coming Back As Frog Thor aka Throg To Play A Pivotal Part?