As Polls Near, Ram Temple Push By Mayawati’s Party At Ayodhya Meeting 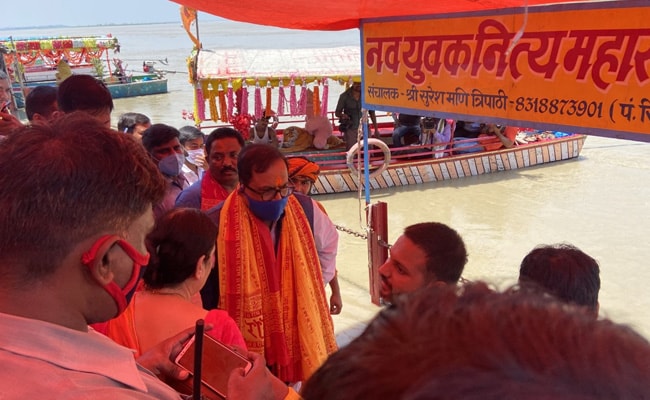 Mayawati’s Bahujan Samaj Party has promised to expedite construction of the Ram temple if elected to power in the crucial 2022 Assembly election, attacking the BJP for what it has called “hoarding of crores of rupees meant for temple construction”. This is an unusual stand for a party whose politics center on the Dalit vote in Uttar Pradesh, India’s most populous state.

“These people have hoarded lakhs and crores of rupees… but they are not using it to build a grand Ram temple. They do not want to build the temple. We will force their hand and this work (temple construction) will be expedited by a BSP government,” the former chief minister’s close aide, Satish Chandra Mishra, said at a meeting of the Brahmin community in Ayodhya.

This was the first of many such meetings planned by the BSP.

With just a few months to go for the election, Mayawati’s party is trying to revisit an old formula – one that rewarded them handsomely in the past – by holding ‘Brahmin sammelans‘, or meetings starting with the temple town of Ayodhya – where a Ram temple is being built after landmark Supreme Court orders.

Brahmins number an estimated 11 per cent of UP’s population and have traditionally played a major roles in politics and power equations in the state.

Mayawati did not attend the first meeting in Ayodhya; Mr Mishra the party’s General Secretary was in charge. Mr Mishra visited prominent temples and Ayodhya’s Saryu ghat before the meeting.

In 2007 Mayawati rose to power on an unlikely combination of votes – from the Brahmins and the Scheduled Castes. A comfortable majority meant she ruled uninterrupted for five years. The latter vote is about 21 per cent in UP, and over 40 Brahmin MLAs from the BSP were elected.

The BSP chief was unable to repeat that performance in subsequent polls, but her party now says it will re-attempt that unlikely combination for the 2022 election.

The choice of venue for the first meeting significant – Ayodhya is the site for the Ram temple, a cornerstone of the ruling BJP ‘s campaign when it claimed an absolute majority in 2017.

Since Chief Minister Yogi Adityanath has made multiple visits, as have other big leaders, including Prime Minister Modi – who was the chief guest at a stone-laying ceremony at the Ram temple in August.

In 2017 the Brahmins largely sided with the BJP and 46 members of the community were elected.

Since then, however, there have been murmurs the community is not entirely happy with the leadership of Yogi Adityanath – a Thakur by caste.

The BJP dismisses this but both Akhilesh Yadav’s Samajwadi Party and Mayawati’s BSP are making efforts to win over the community before the election.

“Mayawati is daydreaming. She may have won in 2007, but under Yogiji we are actually experiencing Ram Rajya and all Brahmins are with Yogiji,” Anand Swaroop Shukla, a UP minister said, reacting to the BSP’s attack.