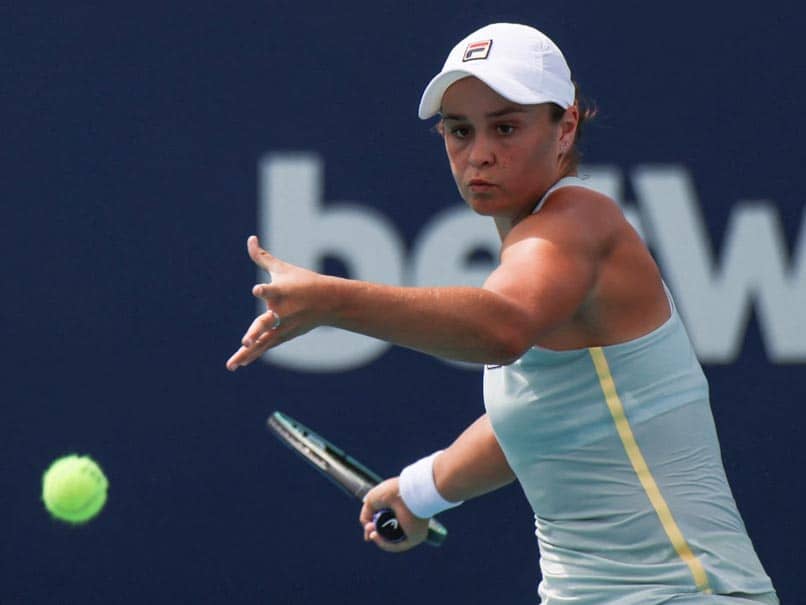 World number one Ashleigh Barty looked sharp in a straight-sets victory over Jelena Ostapenko Saturday at the Miami Open, where men’s second seed Stefanos Tsitsipas cruised past lucky loser Damir Dzumhur. Defending champion Barty defeated the former French Open champion from Latvia 6-3, 6-2 to set up a fourth-round clash with former world number one Victoria Azarenka. Greece’s Tsitsipas — ranked fifth in the world but seeded second behind world No. 2 Daniil Medvedev in the Masters 1000 event that is missing top-ranked Novak Djokovic, world number three Rafael Nadal and No. 4 Dominic Thiem as well as Roger Federer and Andy Murray — was untroubled in a 6-1, 6-4 over Bosnian lucky loser Damir Dzumhur.

Tsitsipas, coming off a runner-up finish at Acapulco last week, hit 10 of his 18 winners off his forehand and committed only nine unforced errors as he relentlessly pressured his opponent.

“There isn’t much I can tell you. It was a great match,” Tsitsipas said. “I started the match very strong, breaking him twice and taking a big lead in the score, and I think the things worked out by themselves after that.

“I created lot of opportunities with my serve, finding the right angles and executing it perfectly. Even with my second serve I felt like I did a lot of damage, not giving him a chance to press first and apply pressure with his shots.”

Rain was the only thing that slowed down men’s fourth seed Andrey Rublev in a 6-1, 6-2 victory over American Tennys Sandgren.

Rublev, up 6-1, 5-2, was unable to convert three match points before the players had to leave the court for the second of two rain delays, but he wasted no time in closing out the match when play resumed.

Rublev, who took his tour-leading number of 2021 match wins to 17, didn’t face a break point, his dominance on full display as he held serve for a 4-1 lead in the opening set with a love game that lasted just 59 seconds.

Shapovalov survived 11 double faults but persevered to win in three hours and 18 minutes.

Barty, first up on Grandstand Court at the Hard Rock Stadium, was done and dusted long before rain arrived.

“Today felt like I was a lot sharper and switched-on and ready to go from the very first point,” said Australia’s Barty, who had to save a match point on the way to a three-set second-round victory over Kristina Kucova.

Azarenka, of Belarus, beat 24th seed Angelique Kerber of Germany 7-5, 6-2 in a battle of former world number ones.

Azarenka, who was playing her first match after a first-round bye and a walkover, took a while to warm up.

But after trailing 4-1, she put the first set back on serve with a break in the seventh game and dominated from there, posting her ninth win in 10 meetings with Kerber.

While Barty cruised into the round of 16, the women’s draw lost world number three Simona Halep of Romania, who withdrew from her scheduled match with Latvian Anastasija Sevastova with a right shoulder injury.

“I’m very sorry I have to pull out of singles and doubles at the Miami Open, but my injury doesn’t let me play here as expected,” Halep said in a statement.

Sevastova received a walkover into the fourth round, where she will face 338th-ranked Ana Konjuh of Croatia, who upset 15th-seeded Polish teen Iga Swiatek, the reigning French Open champion, 6-4, 2-6, 6-2.

Previous articlePM Modi Addresses Nation On Mann Ki Baat: Highlights
Next articleDillian Whyte against Deontay Wilder is a ‘colossal fight’ that could fill a