Batwoman Recap: Arrow’s Diggle Drops by to Help Luke — Plus, Who Died? 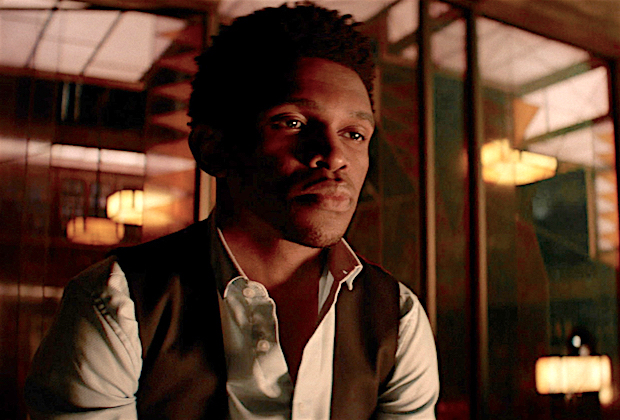 Luke Fox is going through it on Batwoman.

To be fair, he just survived being shot by a Crow, seeing his dead father while unconscious and then waking up only to realize the man who pulled the trigger has no remorse and likely won’t face any real consequences. So yeah, he has plenty reason to be upset.

When Ryan tries to offer some emotional support, Luke asks for some time to himself. He has his own way of dealing with the traumatic experience, which includes following Russell — the man who shot him — to a cop bar for some antagonizing and a very tense game of poker. It’s there he encounters Diggle (guest star David Ramsey, reprising his Arrow role), who says he’s in town on a contract for A.R.G.U.S.

Elsewhere, Roman Sionis is annoyed with Jacob Kane for speaking up about Luke’s shooter Russell, who’s been accused of falsifying evidence. He also revels in his air-tight explanation for Circe’s sudden reemergence, which is that she went to rehab in Malibu for recovery. Plus, he scrubbed all evidence of his actual daughter’s death so they’re in the clear. However, Enigma is disturbed to find out that Alice — as in Kate’s twin sister — gave Circe the new face. That might interfere with the brainwashing, which would throw a real wrench in their plans. 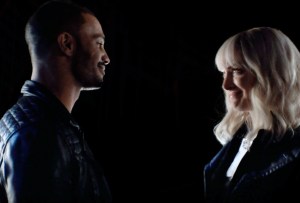 Cue Jacob and Alice teaming up to kidnap Circe, who they believe to be Kate with a new face. “If you’re wearing yoga pants, this is so much worse than I thought,” Alice quips. At the Crows’ headquarters, they confirm Circe’s DNA is a match for Kate Kane and try to trigger her old memories using childhood items. So far, it’s not going well.

Meanwhile, Batwoman searches a Crow safe house to find Ezra, the man they believe will be Sword’s next victim. It’s too late, since he’s already dead. It turns out that Ezra assaulted the real Circe at a party. Circe claimed self-defense but was sent to Arkham, where she died after being trampled by escaping inmates. Ezra went into witness protection because he feared Roman Sionis would come after him. He was killed by Tatiana, suggesting that Safiyah’s back in town for some unfinished business.

Ryan also drops by the bar to ask Luke for his help, which turns into a small fight. Luke then reveals that he didn’t want to wake up from his coma because he saw his father while unconscious. Why would he want to live in a world where he gets shot for nothing and the culprit faces no consequences?

After seeing no progress with Kate’s memories, Alice then speaks to her as Beth. She recalls a time Kate wanted to come out to her. She shows Kate the mug she made, noting she already knew because she loved her sister. The word “loved” triggers something in Kate, who attempts to unlock her real memories. However, they’re interrupted by figures in dark clothing who kidnap Jacob. Alice has also been taken by Safiyah’s people because she still has to pay for burning down the island full of Desert Rose plants.

Meanwhile, Circe escapes and runs into Batwoman, who takes her to meet with Mary at the loft. Circe doesn’t recognize Mary, but she remembers Sophie and immediately embraces her. It feels like the old Kate is back until the brainwashing kicks in and Circe attacks Mary, forcing Mary to put her down with a sedative. There’s a war brewing between Kate and Circe in her mind, and it’s only going to get worse unless they undo what’s been done to her.

Jacob has been kidnapped by Roman, who says he’s going to publicly reveal Alice as Beth Kane. When Jacob threatens to send Gotham police after him before he can do that, Roman reveals that he has the GCPD in his pocket. Two officers then arrest Jacob for aiding and abetting Alice, a known criminal.

There’s tension in the air as Luke faces Russell in a poker tournament. Diggle wants to know what grudge Luke has with Russell, and Luke insists it’s just a friendly game. Russell cheats and thinks he won the game, but then sees that he’s been outsmarted by Luke, the actual winner. After some gloating, Luke suggests they take things outside. (“I’ve been running from this fight my whole life, and it’s gotten me nowhere.”) They exchange blows in the alley before Diggle breaks up the fight, revealing that he knows Russell shot Luke.

In a heart-to-heart, Diggle levels with Luke. He also lost his father at a young age. He tells Luke that he carries his father’s legacy and should channel that anger in the fight for justice. The advice seems to help Luke. However, it looks like Diggle is suffering from headaches and is actually in town to visit a neurologist. Before they can delve further into that, they spot the Bat signal in the sky — the Bat Team is using Morse code to call for Luke’s help. 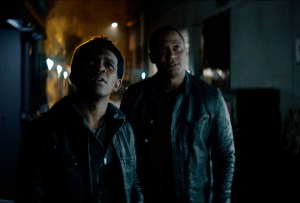 At the Batcave, Ryan and Mary break the news to Luke that Kate’s still alive. It’s a lot to process — he’s been through a lot, lately — but this is good news. Batwoman then goes after Safiyah, offering her mom’s Desert Rose in exchange for Alice. When Safiyah asks why Batwoman would give up something so precious for a criminal, Batwoman notes that she owes Kate for giving her a second life and Alice is the key to unlocking her memories. Safiyah accepts and takes the plant that will help her rebuild her kingdom.

Alice taunts Safiyah for yet again escaping her clutches and getting everything she wanted — her boyfriend and her sister — but Safiyah suggests she might be wrong about that. When Ocean doesn’t answer his phone, a worried Alice abandons Batwoman (and a chance to save her sister) to find Tatiana. It’s not long before she encounters the assassin and kills her, before discovering Ocean’s dead body. He’s not coming back this time, and she’s destroyed.

Jacob, who has been transferred to a jail in Metropolis, calls Mary and explains that he now understands why Alice is the way that she is. What happened to her is the same thing that is happening to Kate with the Circe persona. He tells Mary he’s counting on her to save her sisters, and she tells him she loves him.

Elsewhere, Ryan has something else to say to Luke after their confrontation in the alley. She’s sorry for what happened to him and doesn’t know what it’s like to go through what he experienced, but she is not sorry for saving him. They hug, marking the end of their fight.

In one final scene, Sophie realizes that Circe is missing. Confused about her identity, Circe goes back to Roman Sionis and asks if she really is Kate. Roman tries to soothe her, and she stabs him in the hand. Seeing that Circe has begun to unravel, Enigma demands that Roman tells Circe the truth so she can decide who she wants to be.

Got thoughts on this week’s Batwoman and Diggle’s visit? Drop ’em in a comment below.

Previous articleAnkita Lokhande Holds Havan At Home Ahead Of Sushant Singh Rajput Death Anniversary But SSR Fans Troll Her Over Picture With Vicky Jain!
Next articleFrench GP: Mercedes and Lewis Hamilton desperate to bounce back as F1