Bhumi Pednekar wished to be a part of ‘The Family Man 2’ for THIS reason; FIND Out what it is 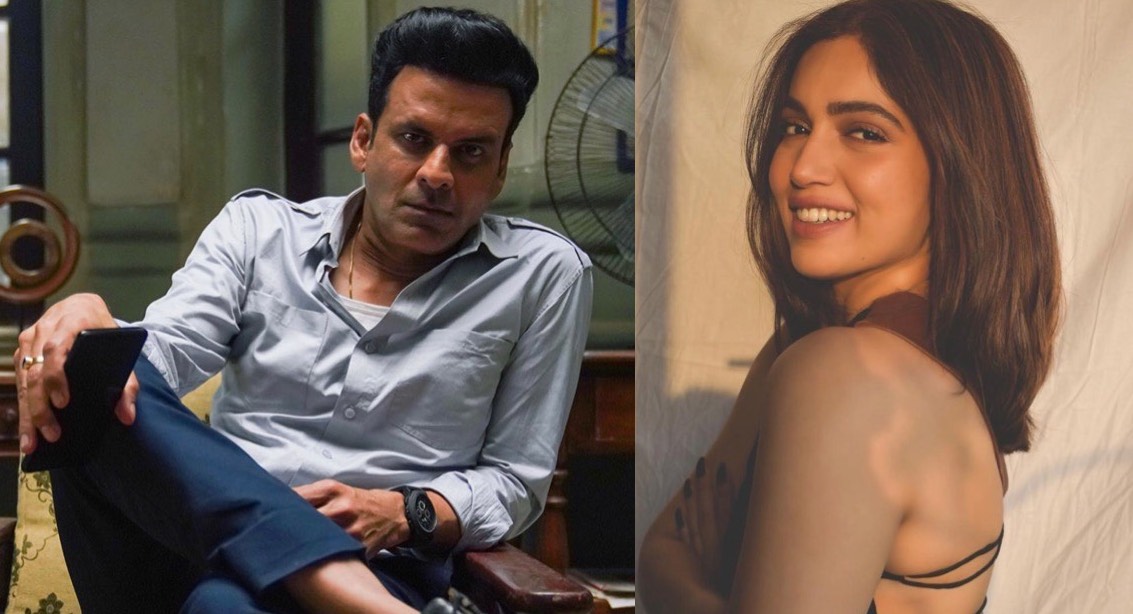 The release of all the episodes of ‘The Family Man 2’ has brought cheers to its millions of fans and has received a massive response from the audiences. The highly acclaimed show which launched on June 4th on Amazon Prime Video, is created by the maverick duo, Raj Nidimoru and Krishna DK. The sequel to 2019 smash hit, ‘The Family Man’, was the most awaited by viewers for close to two years now – ever since the show debuted on Amazon Prime.

The return of the nation’s most endearing Family Man aka Srikant Tiwari, played by Manoj Bajpayee, has left the fans of the thriller series elated. This season Srikant Tiwari is pitted against a new, powerful and brutal adversary named Raaji, essayed by Samantha Akkineni.

The nine-part season of the thriller sees Srikant continuing to jostle between the duality of being a middle class family man and a world class spy and trying to save the nation from an imminent attack. Packed with exciting twists and an unexpected climax, the new season of the edgy action-drama series gives a riveting glimpse of the two worlds of Srikant.

The show has been garnering praises from all the corners, specially from the Bollywood fraternity. Recently, Bhumi Pednekar took to her Instagram handle and praised the flawless performances by the star cast of the series.

She wrote, “I just finished #TheFamilyMan2 & I wish I could be a part of it because it’s Brilliant, Too Good & just beyond @rajanddk @bajpayee.manoj sir shri is all wits, guts and glory.. @samantharuthprabhuoffl raji was a performance worth envy. So powerful. One of the best ever. Killed it. @ashleshathaakur you’ve done magic #priyamani @sharibhashmi @sharadkelkar @hindujasunny @shreyadhan13 the entire cast and crew..Every performance was on point. The action, drama, comedy, thrill, writing”. 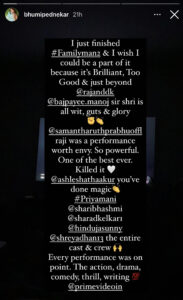 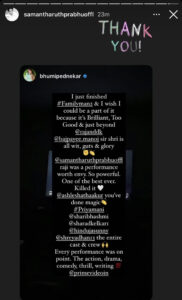 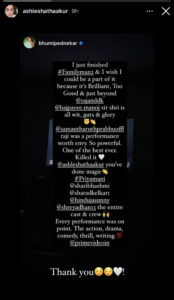 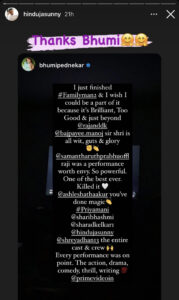 ‘The Family Man 2’ is now streaming on Amazon Prime Video.