Bollywood star Bhumi Pednekar is one of the most sought after actresses today due to her brilliant acting skills.

Bhumi is one of the most hardworking and loved actresses in the industry and there are no second thoughts about it. The actress has proved her mettle time and again and is known for her impeccable acting prowess.

She is also among the most captivating beauties of Bollywood. The actress has been winning hearts on social media courtesy of her alluring photos. Right from sharing her candid selfies to posting her glammed-up photos, the ‘Bala’ star has been setting hearts racing with her gorgeous clicks.

She enjoys a huge fan base on social media and keeps her fans updated about her daily life. While sharing glamorous pictures time-to-time, the diva stuns her fans and makes their jaws drop.

Keeping up with trajectory, Bhumi took to the Instagram recently, and stunned her massive fan army with a sultry selfie.The actress looked gorgeous in the sun-kissed selfie, wherein she is seen flaunting her natural glow. Bhumi is donning a pink lacy strappy top, and her hair is wet and left open. With no-makeup on her face, Bhumi looked absolutely beautiful in the snap.

She captioned the photo as, “That golden hour glow”. The post has garnered more than two lakh likes and a heart from Janhvi Kapoor. She also took to the Instagram story and shared a collage of her alluring selfies. She wrote, “Beautiful is a state of mind”. 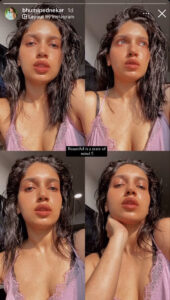 On the work front, Pednekar has completed the shoot with Rajkummar Rao for ‘Badhaai Do’, a sequel to ‘Badhaai Ho’. She has also committed to star in Karan Johar’s historical war period film ‘Takht’, alongside an ensemble cast of Ranveer Singh, Vicky Kaushal, Anil Kapoor, Kareena Kapoor, Alia Bhatt and Janhvi Kapoor.

Previous articleIt was great to play with legends like Sachin Paaji again, says Yusuf Pathan in the Road Safety World Series
Next article“How I wish I would die” … Syrians tortured in Lebanon