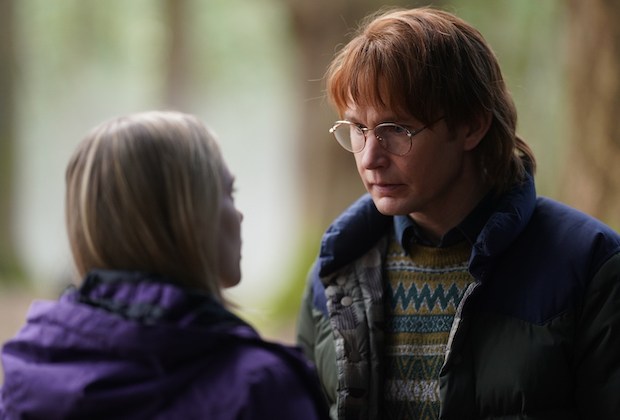 Is it weird that, while watching this week’s Big Sky, I start to hope that Scarlet is a murderer, too?

We’ve already seen that Phoebe’s mom is freakier than her turtlenecks would have us believe. So is it that hard to make the leap that she — and not her sister Mary, as we’ve been led to believe — was behind Phoebe’s dad’s death?

All I’m saying is that if, in next week’s episode (which I have not seen) Ronald tries to off his girlfriend and she turns it around and winds up with his life in her hands? I won’t hate it. Though I would like to see Jerrie able to run in and at least kick him a few times, for closure’s sake.

Anyway, this week’s episode also clues us in to exactly what’s happening on the back pasture of the Kleinsasser’s ranch. Read on for the highlights of “Nice Animals.” (And did you hear about the Season 2 renewal?)

NO GOOD DEED GOES UNPUNISHED | As you might’ve guessed, Rand was behind the wheel of the truck that plowed through Jenny’s motel room at the end of the previous episode. After he’s driven away, hooting with glee, we see that Jenny is bloody but OK, and Angela is dead. “I told you and your friend to leave Lochsa,” Sheriff Wagy says coldly, but Jenny hits home when she calls him an “accessory” to the murder.

And when Wagy goes to tell Horst about the death — as well as the fact that he knows Rand was behind it — he alludes to some papers he recovered at the crime scene. The documents are a “record of all them chemicals you’ve been putting on your ranch,” he adds, saying he can no longer protect the Kleinsasser family from getting investigated. 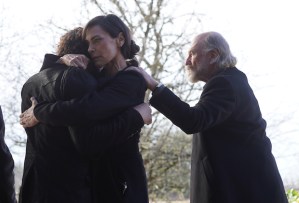 Elsewhere, Cheyenne lets her mother know that JW killed Blake, and Margaret asks her not to say anything to Hurst yet. Then she recounts the time that, weak from childbirth with Cheyenne, Hurst demanded that she get dinner on the table. So she laced his meatloaf with rat poison… and nothing happened. “Woke up fit as a fiddle,” she recalls. “I swear to God, that man is too damn mean to die.” Later, she and Horst have a deeply disturbing conversation in which he compares her to a cow that can only give birth to deformed calves, and she vows to kill him herself.

At Blake’s funeral, Margaret whispers to JW, “I will kill you,” and then has to be physically pried off him. No one there, however, seems to think this is odd.

We eventually learn — via Rosie’s dad, Gil — that the Kleinsassers have made a buttload of money by allowing fracking companies to dump their toxic chemicals on the ranch’s back pasture, and Wagy brokered the deal. In addition to Cole Danvers, who started asking questions and got killed by Rand because of it, the family’s illegal dealings have been responsible for the deaths of workers who came into contact with the toxic waste and those who caused problems for the Kleinsassers.

So Jenny, Cassie and Gil sneak onto the property the night of the funeral to take photos of bodies in oil drums and to grab a soil sample. But as they’re doing so, Wagy alerts Horst. And pretty soon, it looks like Rand and his big truck are coming for them. (Um, guys? RUN!) 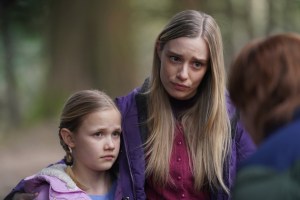 WORST CAMPING TRIP EVER | Ronald convinces Scarlet and Phoebe that going on a camping trip in the middle of the night in the 16-wheeler he just bought is TOTALLY NORMAL AND FUN! NOTHING TO SEE HERE! So the ladies hop in his new rig, unaware that Mary’s bloody corpse is hanging out a few inches from where they sleep.

Once they get to the camping site (read: the woods in the middle of nowhere, where there’s no cell service), Ronald is super creepy as he explains to Phoebe that “nice animals” like bunnies get eaten by fiercer creatures, and that’s just the way things go. Then, as Scarlet and Phoebe snooze in the tent that night, he creeps out to bury Mary’s body… except Phoebe wakes up, wanders out and wonders what “Arthur” is doing out in the dark. Oops.

Back at home, Lindor and Jerrie ascertain that Scarlet is Ronald’s girlfriend and that they’ve gone somewhere in his truck. (Side note: I love Jerrie and hope, even though Lindor is right and it will ruin her life, that she becomes a regular employee of Dewell and Hoyt Private Investigations.)

Now it’s your turn. What did you think of the episode? Sound off in the comments!

The TVLine-Up: What’s Leaving, New and Returning the Week of May 9

Previous articleIsrael .. The deadline has passed and Netanyahu will die Do not form government
Next articleBlackpool 2 – 0 Doncaster