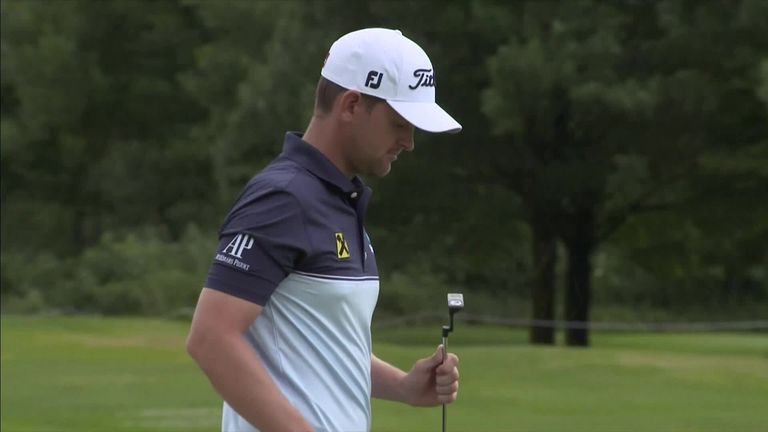 Top shots and big moments from the second day’s play in Munich, where Bernd Wiesberger and Viktor Hovland stayed in contention behind halfway leader, Niall Kearney.

Bernd Wiesberger laid down another marker for Ryder Cup selection as he and Viktor Hovland closed to within two shots of halfway leader Niall Kearney at the BMW International Open.

Wiesberger’s form was under close scrutiny from European Ryder Cup captain Padraig Harrington as they played the opening two rounds together in Munich, and the Austrian added a 68 to his opening 67 to close on nine under par.

Kearney was also four under for the round having earlier completed a first-round 65 following Thursday’s early curtailment of play, and the Irishman’s clubhouse lead of 11 under par stood up for the remainder of the day.

Wiesberger and Hovland were both just one behind before late mistakes ensured Kearney would have the lead heading into the weekend, US Open runner-up Louis Oosthuizen is four off the pace, while Sergio Garcia did well to par the last to make the cut after pulling his drive into water.

While Kearney set the early target when he made his fifth birdie of the second round at the last, Wiesberger produced another confident performance under the watchful eye of Harrington, making five birdies before carding his only bogey of the day at the seventh – his 16th.

The world No 54 is currently “on the bubble” in the Ryder Cup qualifying standings, and he revealed that he was inspired by watching and learning from Harrington, who just missed out on making the halfway cut despite making eagles at the fourth and sixth in a valiant attempt to extend his tournament.

“The score is alright,” said Wiesberger. “I had little spells of giving away shots today at the end and in the middle of the round yesterday, which I felt was unnecessary. I was kind of in control, but I didn’t feel like I was shooting on all cylinders.

“I’ve been struggling with the pace on the greens, not quite getting the ball up to the hole, and I felt like we all did that in the group. But all in all, it’s a good start, a good position. I’m looking forward to pushing on and having a nice weekend.

“I’ve played plenty with Padraig, he’s very competitive and tries his hardest out there, even though he wasn’t quite on it this week. But you can see, all of a sudden he makes a couple of eagles and you see it in his eyes. He was very focused on what he was doing.

“Hopefully the odd shot I hit over the last two days maybe stayed in the back of his mind, but at the end of the day we’re still trying to compete out here. He has his stuff figured out off the golf course and results will hopefully determine who will be on his team. It was a pleasure playing with him, there’s a lot to take from his demeanour out on the course.”

Hovland recovered from an early blemish with a barrage of birdies, picking up five shots in six holes before the turn and adding two more at the 11th and 13th as he raced to 10 under, although back-to-back birdies sapped his momentum.

But the young Norwegian birdied the last to get back to nine under alongside Wiesberger, Masahiro Kawamura (70), Adrien Saddier (69) and Jorge Campillo (68), with two-time champion Pablo Larrazabal a further stroke adrift after returning a 70.

“I made some great putts out there,” said Hovland, who had to withdraw from the US Open midway through his second round due to sand in his eye. “The biggest difference today was that I was able to not hit it in the water.

“I made some bogeys here and there, but at least they came from poor shots, a poor chip and a putt instead of hitting one in the water and taking a penalty shot. It was pretty solid.

“I think I just need to play very similar to what I have been doing, but the big key is to not have any penalty shots. There is a lot of water and spots if you get a little too greedy you can end up hitting a decent shot into the water, which you can’t do it here. Just play pretty solid, hit a bunch of greens and hopefully I can keep putting well.”

Oosthuizen made four birdies and eagles the fourth in his 67 which lifted him to seven under with 2016 Ryder Cup star Andy Sullivan (69), and home favourite Martin Kaymer, also fired a 67 which featured eight birdies.

But it was a tough second day for overnight co-leader Sam Horsfield, whose 77 was 13 shots higher than his first effort, while Garcia had to dig deep on the back nine to get himself in for another 36 holes.

The Spaniard had two sixes on his card on the outward nine and looked to be heading for an early flight home until he hit back with four birdies in seven holes only to find the hazard from the tee on the par-five final hole.

But after taking his penalty drop, he drilled a fairway-wood to the back of the green and did well to two-putt from around 70 to close out a 69 and make the cut with nothing to spare on two under par.