BMW moves forward on BEV mission with iX, i4 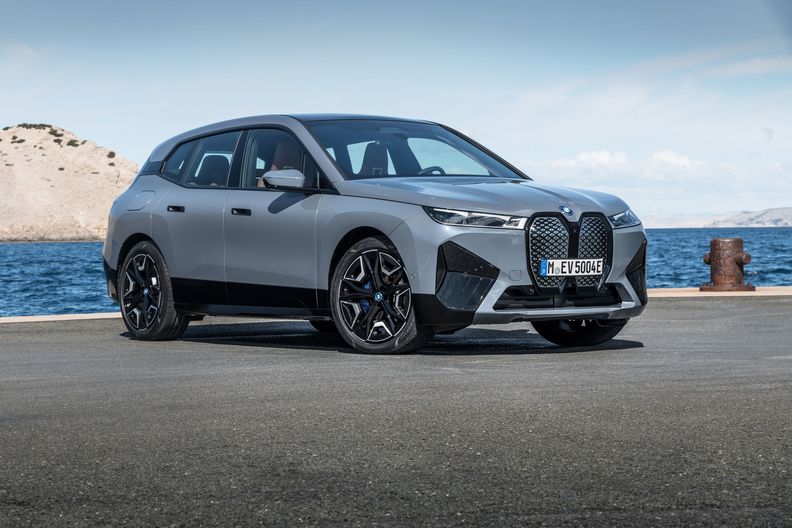 LOS ANGELES — BMW is aiming for the sweet spot of the U.S. electric vehicle market with a pair of next-generation battery-powered models.

The BMW iX crossover and i4 sedan will arrive at U.S. dealerships in the first quarter of next year. The iX will start at $84,195, while the i4 will start at $56,395. Both prices include a $995 shipping fee but don’t include EV tax credits.

BMW’s push into the EV market is timed with an industry acceleration. Automakers plan to introduce about 100 battery-powered models in the U.S. in the next five years, according to a forecast by Guidehouse Insights.

Next year will also see a major push by rival Mercedes-Benz into the EV space. The Stuttgart automaker plans to introduce up to three electric crossovers and a midsize sedan in 2022.

But BMW’s and Mercedes’ EV strategies have stumbled in recent years. Both automakers ditched plans to introduce a crossover in the finicky U.S. over performance and range concerns.

The premium midsize crossover segment is among the fastest growing in the U.S. Sales climbed 26 percent through March, accounting for 26 percent of the U.S. luxury market, according to the Automotive News Research & Data Center.

The dual-motor iX, powered by a 111.5-kilowatt-hour battery, delivers 516 hp and an estimated 300 miles of driving range.

BMW’s new large kidney grille is featured prominently. Since the electric-drive system requires only a small amount of cooling air, the grille is closed off and hides a suite of sensors, including cameras and radar required for automated driving features.

The grille is bookended by the slimmest headlight units on a series production BMW. Daytime driving lights, with integrated turn signals, have a new design as two-dimensional strips along the upper edge of headlights.

The dashboard is anchored by a free-standing curved display that combines a 12.3-inch instrument cluster and the center 14.9-inch control display to form a single unit angled toward the driver. With a magnesium housing and a frameless, single-piece glass surface, the display uses anti-reflective glass to eliminate the binnacle typically used to shield the readouts from sunlight. A head-up display projector is flush-fitted into the instrument panel without a frame, which allows it to be hidden from sight.

The iX is the first model from BMW Group to be fitted with a hexagonal, track-inspired steering wheel, which the automaker said gives the driver a better view of the section of the curved display positioned behind the steering wheel.

The EV’s computer can process 20 times the data volume of previous models. That increase sets the iX up to achieve a higher level of automated driving when artificial intelligence needed to handle the task is ready to be deployed in customer vehicles.

The iX is designed for the social media generation. An overhead interior camera allows occupants to take snapshots during a journey. To ensure only pleasant memories are captured, the camera can be set to “only take a photo when at least one of the occupants is smiling,” BMW said.

Like the iX, the sporty four-door i4 is built on BMW’s lightweight modular Cluster Architecture platform.

The dual-motor i4 M50 features an electric all-wheel-drive system that can optimize traction and handling stability by adjusting the drive torque without the need for traction control intervention.

The i4, based on BMW’s bestselling car, the 3 Series, combines the comfort of a four-door car and the practicality of a large tailgate. The coupe features short overhangs, slim pillars, doors with frameless windows and a roofline that flows into the rear.

The front bumper has a few openings, including air curtains positioned toward its outer edges, which direct air efficiently past the wheels.

The rear design features long and slim L-shaped lights, and a diffuser made from textile-based raw materials helps to reduce weight and direct the airflow more efficiently, BMW said.