Breeders Season 2 Premiere Recap: Therapy Is for the Squirrels — Grade It! 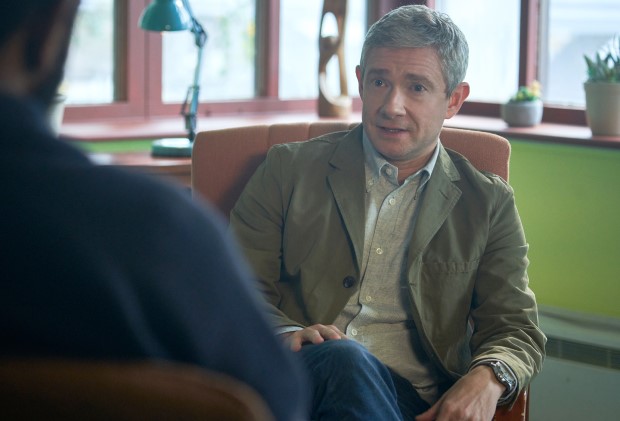 Does parenting get any easier as your kids get older? If you were to ask Breeders‘ Paul and Ally, that answer would probably be “hell no.”

The FX comedy starring Martin Freeman and Daisy Haggard returned Monday with the first two episodes of its sophomore run, and despite a significant time jump that aged wee ones Luke and Ava, domestic bliss still seems quite unattainable for the family. As a major growing pain begins to affect the now-teenaged Luke’s life, Paul and Ally feel the strain of caring for their older parents, all while desperately trying to keep their own lives (and temperaments!) afloat. (Who’s got the time to find a proper anger management therapist these days, really?)

What other rough roads lie ahead? Let’s recap the premiere from the top and find out (and be sure to check out our Season 2 preview with Freeman and Haggard for some additional intel).

The season begins with a booming noise emitting from the kids’ room, as Paul shoots upstairs to yell at them to pipe down. He busts in the door and we’re immediately struck by how much the kids have grown. Ava is now 10, while Luke is about to celebrate his 13th birthday. Though it seems like many things have changed, one thing remains very much the same: The world of parenting remains quite the challenge for Paul, who’s still in therapy to learn how to keep his anger in check. (And it’s not going particularly well.)

After Paul and Ally are hit with a late fee from Ava’s after-school program, they learn Luke hasn’t been picking his sister up on time. Paul lets the boy have it, questioning whether the kid is drinking or doing drugs at the park with his mates. Paul’s patience is nearly non-existent (a fact that’s been crystal clear if you’ve seen even a single episode), so Luke promises to be on time from now on. However, the next day comes and he bails on picking poor Ava up yet again. Paul leaves work to track down Luke, and after a mild panic, finds Ava safely at home. Luke seems to be testing them, and Paul is (shocker) pissed.

In a new session with a second therapist, Paul tries to rationalize how his anger is healthy. He says his dad will eventually die of some sort of ulcer because he suppresses his anger and it eats away at him like “some f–king… stomach… f–king… squirrel.” Paul, on the other hand, attempts to live his life squirrel-free, by letting his rage roam freely and explode out of his body.

When Luke arrives home, Paul and Ally tell him he’s not getting his birthday present, but he doesn’t seem to care. The parentals then decide to cancel his entire birthday, and they’re committed to making good on their threat. There will be no “sneaky quiet birthday, no Anne Frank birthday up in the attic!” Ally tells Paul. Harsh, yet hilarious (and yes, we’re all going to hell.)

After a third failed therapy session (with yet another therapist!) and a chat with Jim and Jackie, Paul and Ally ultimately crack and renege on their birthday threat. Luke then ducks out to meet friends at the park before dinner. Ava suggests that Paul pick him up later and have a talk with him. “I’m worried about him,” she says. When Paul does just that, he finds Luke in the middle of a pond sitting in a paddle boat alone. He doesn’t have any friends, he says. He just enjoys the silence, and being alone outdoors. Paul then realizes that his son is actually quite a bit like him, after all… and something might be wrong. 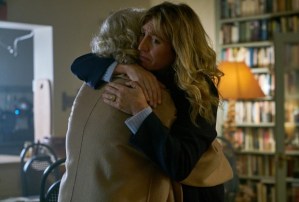 In the night’s second episode, Ally worries about her mom’s living situation after Leah’s apartment is burgled. Leah, who is typically a spicy firecracker of a woman, is understandably shaken and demure after the invasion of her space, but a little brandy seems to perk her up a tad.

Meanwhile, Luke’s history teacher tells Paul and Ally that he’s behind in school, mostly due to his lack of focus and falling asleep in class. Luke admits he can’t fall asleep at night, leaving Paul to wonders if he needs mental help, but Ally thinks he’s just being 13.

Later, when Luke shows up unexpectedly at Leah’s house, Ally heads over to find her son sharing a cognac with his grandmother (“It’s only a single!” Leah exclaims. “It’s medicinal!”) He tells Ally that school is “too much,” and for the first time, she sees her child is really struggling.

Paul inquires further, and Luke admits he can’t turn his brain off. When he does get to sleep, he wakes up in the morning with his heart beating out of his chest. The next day, Luke is stricken by an actual panic attack. Paul brings him to their general practitioner who diagnoses him with Generalized Anxiety Disorder. Ally’s peeved Paul didn’t speak to her first, but they agree to take things slow and maybe not tell the school right away.

As the episode ends, Leah remains frightened about being alone, while Luke once again lies awake in bed with worry.

How’d you like the first entries of Breeders‘ second season? Grade the one-hour premiere, then drop some comments below!

Aladdin Fame Avneet Kaur Once Said A Strict No To Bold Scenes: “Would Rather Not Pick A Story That…”