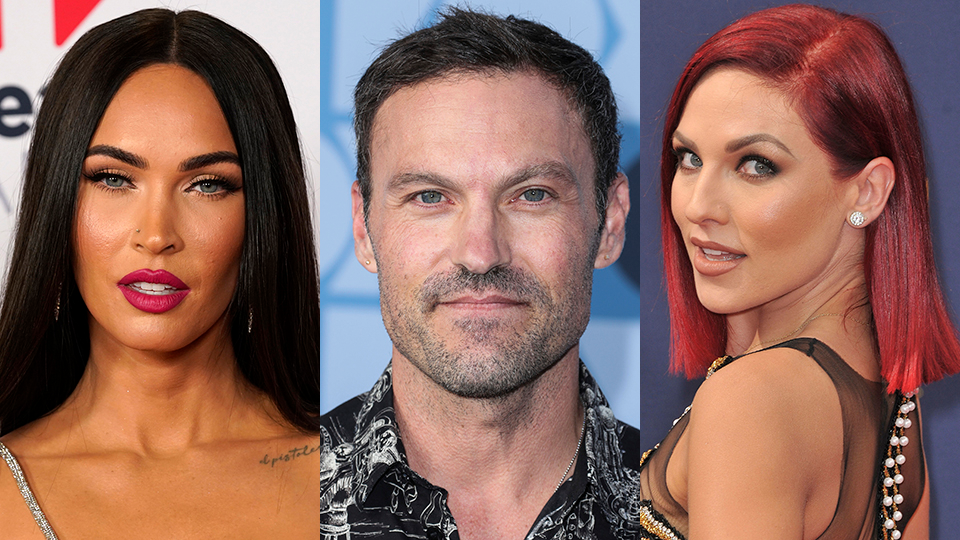 No bad blood. Brian Austin Green’s response to Megan Fox’s “shade” at Sharna Burgess shows that he has no issues with his ex-wife.

The Beverly Hills, 90210 alum took to his Instagram Story on Wednesday, July 7, to respond to claims that his ex-wife made a “petty” comment about his new girlfriend. “For people that need or want clarification. Megan and I get along great,” he wrote.  “Neither of us are sending petty digs to each other. We both work really hard to get along and coparent well for our kids. Now stay safe and spread kindness and love.”

Green’s Instagram Story came after Fox commented on a photo of her ex-husband and his new girlfriend kissing at Walt Disney World’s Animal Kingdom in Orlando, Florida. “It’s been a really long time since I’ve been with someone I can truly share life with,” Green captioned the post with a red heart emoji. Burgess responded, “There’s no one else I could ever imagine sharing it with. I love you ♥️”

The post also received a comment from Fox, who wrote, “Grateful for Sharna,” along with a blue heart emoji. Fox went on to delete her comment, which led fans to believe that the remark was shade toward her ex-husband’s new relationship. However, according to Green and Burgess, there’s nothing but love between the ex-spouses. Burgess, for her part, lso responded to Fox’s comment with two white heart emojis.

Green and Fox married in June 2010 and share three kids: Bodhi, 7, Journey, 4, and Noah, 8. In May 2020, Green confirmed that he and Fox had secretly split at the end of 2019 after almost 10 years of marriage. “She said, ‘I realized when I was out of the country working alone that I feel more like myself and I liked myself better during that experience and I think that might be something worth trying for me,’” he said at the time on his podcast, “…With Brian Austin Green.” “I was shocked and I was upset about it but I can’t be upset at her because she didn’t ask to feel that way. It wasn’t a choice she made, that’s the way she honestly felt. We talked about it a little more and said let’s separate for a bit… and so we did.”

Fox filed for divorce in November 2020, days after she made her red carpet debut with her new boyfriend, Machine Gun Kelly, whom she met while she was still married to Green while filming the upcoming movie, Midnight in the Switchgrass. Green and Burgess started dating at the end of 2020.

A source told Entertainment Tonight in March that Fox “isn’t fazed” by her ex-husband’s new relationship. “She doesn’t really care who Brian dates, but she has her standards set high for anyone that meets or is around her kids,” the insider said. According to the source, the main reason Fox isn’t concerned with her ex-husband’s love life is that she’s moved on herself with MGK.

“MGK always puts Megan first, treats her like a queen and is super respectful, thoughtful and funny, which are all qualities that she loves,” the insider said. “MGK is head over heels for Megan and didn’t think he’d get so lucky to score someone of her caliber.”