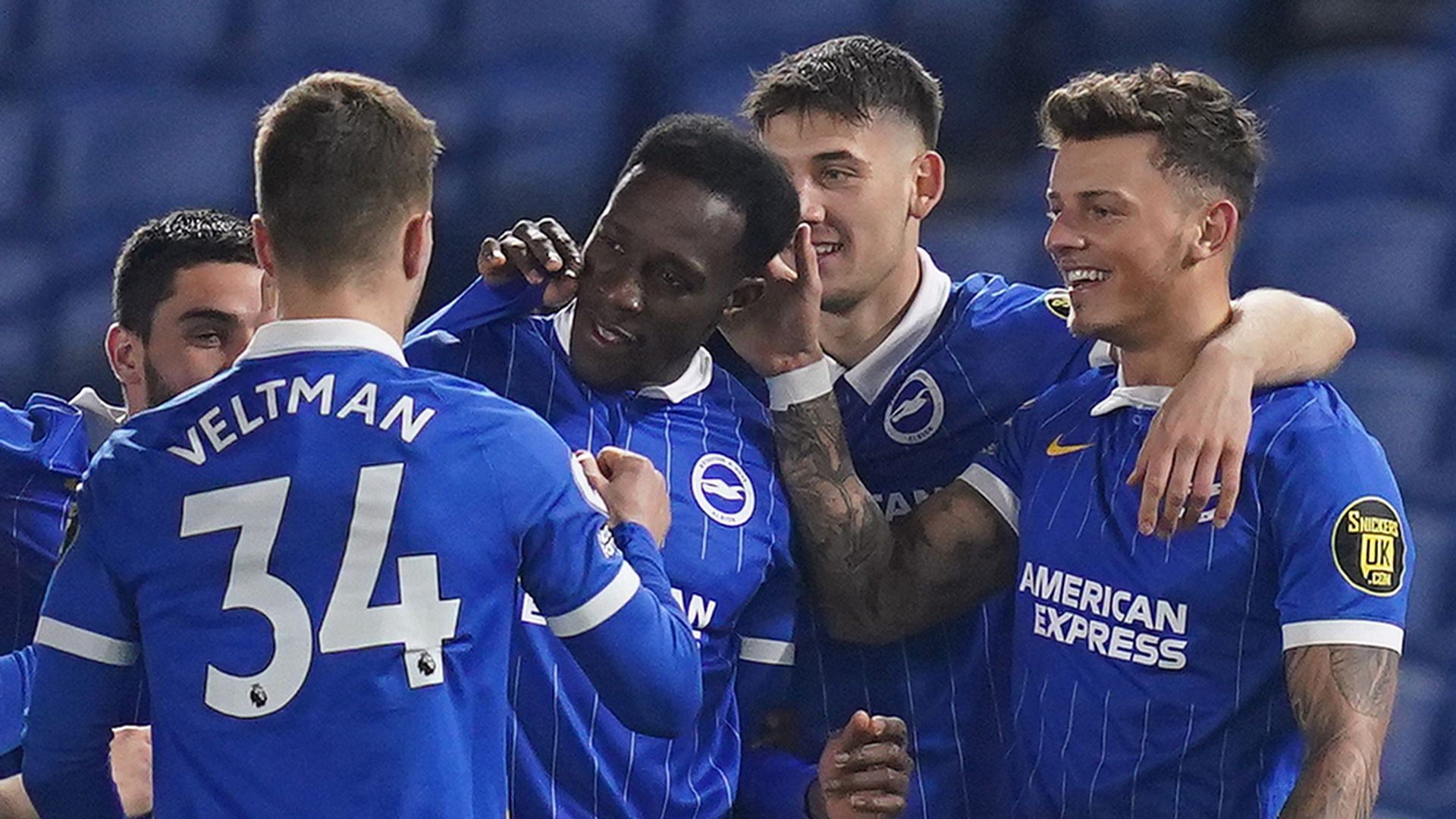 Brighton boosted their hopes of Premier League survival by cruising to an emphatic 3-0 victory over relegation rivals Newcastle.

The hosts dominated the opening 45 minutes and got their reward on the stroke of half-time when Leandro Trossard’s curled effort found the bottom corner.

After the break, Ryan Fraser struck the woodwork for the visitors but two minutes later they were further behind as Danny Welbeck’s strike doubled Graham Potter’s side’s advantage.

The pressure is firmly on Toon boss Steve Bruce with just nine games remaining in the campaign. His side sit just two points above the relegation places, albeit with a game in hand on 18th-placed Fulham, who lost to Leeds on Friday evening.

How the Premier League table stands…

How Brighton pulled six points clear of the drop zone…

Brighton started brightly and Jakub Moder forced Martin Dubravka into a low save at his near post inside the opening five minutes.

After 30 minutes, the hosts were dominating possession and had had five shots, including two on target, with Newcastle yet to test Robert Sanchez in the home goal.

Newcastle had to wait until the 37th minute for their first opportunity when Isaac Hayden headed wide at the far post.

Man of the match: Danny Welbeck.

Moments later, Maupay had a good opportunity at the other end after being picked out by Trossard’s cut back, but his shot was blocked by Ciaran Clark.

Matters got worse for Newcastle just before the half-time break, when Hayden was hurt in an accidental collision with Yves Bissouma, and he had to be carried off on a stretcher.

Moments later, Brighton took the lead, having dominated throughout the first half, with Trossard picking up the ball on the edge of the box before turning and curling it into the bottom-right corner.

Newcastle created their first meaningful opportunity at the start of the second half when Miguel Almiron released Fraser in space on the left, and the Scotland international curled the ball towards the far corner, only for it to strike the upright.

However, Potter’s men responded immediately, with Welbeck doubling their advantage. The forward cut inside onto his right foot before curling the ball beyond the dive of Dubravka and into the back of the net from 20 yards.

In the 68th minute, Brighton made sure of the points when Pascal Gross crossed for Maupay, who volleyed the ball into the net to end a run of nine games without a goal.

“When you lose, you want to be playing as soon as possible, but they [Newcastle] have got two weeks to get back on the horse and look for a win.

“They looked a sorry group tonight, from start to finish. For me, they were passive throughout, they looked like a team accepting their lot.

“That’s not a good sign, that doesn’t bode well for the future.

“They’re still in a great position, you wouldn’t want to be swapping with Fulham, but looking at them, they need to get some momentum going from somewhere, some belief, some fire in their bellies.

“They need to find some fire. A bit of aggression, not accepting people scoring easy goals against you, not accepting that going 1-0 behind means it’s over.”

Merson: Newcastle fans must be realistic

Speaking on Soccer Saturday earlier in the day, Sky Sports‘ Paul Merson said Newcastle fans may need to lower their expectations and accept the current limitations at the club.

Brighton boss Graham Potter: “Really pleased, the performance was fantastic. The players were brave from the start and were smart.

“I thought we were the dominant team in the game and deserved to win. Overall, we played well, we showed a really good attitude, good courage, and I’m delighted for the players.

“They’ve had to suffer, so it’s nice to get three points off that performance.”

Newcastle boss Steve Bruce: “Certainly was tough, we were simply beaten by a far better team on the night. It was a very difficult evening for us, we have to accept it, and take responsibility for it, because at times it was a little bit too easy for Brighton. Take nothing away from our opponents, they were better in every department.

“Without the ball and with it, it was a big problem. We kept surrendering possession back to them, and we all know they’re a very decent football team, and we didn’t do enough without the ball either. When that happens, it becomes a very difficult evening for you.

“We needed to get to half-time and didn’t quite get there. On the night we were well beaten by the far better team on the night.”

Man of the match – Danny Welbeck

“There were some brilliant performances from Brighton, but for me, Danny Welbeck was the real difference maker. He not only grabbed a goal but produced a top-class, all-round performance.

“He was always a threat going forward. His link-up play was also superb, alongside scoring a fine goal.”

Opta stats – Brighton at the double against Newcastle

Previous articleContinuous protests in Spain … and calls for a rapper to be released
Next articleLarge Asteroid To Zip Past Earth At 124,000 kmph