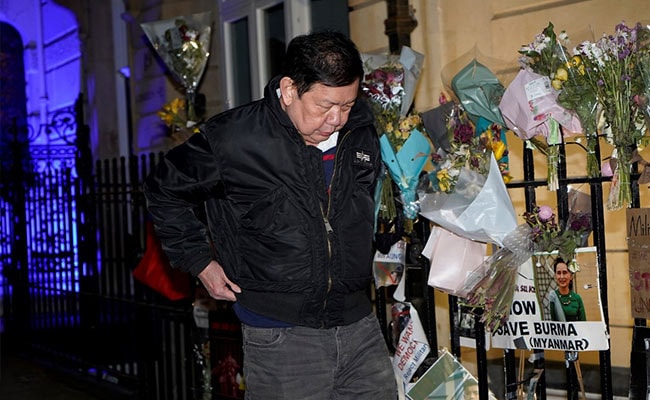 Kyaw Zwar Minn, stands locked outside the Myanmar Embassy in London on April 7, 2021.

Britain confirmed Thursday that it could no longer recognise Myanmar’s ambassador in London, after the ruling junta issued formal notification that he had been withdrawn for supporting the deposed government.

UK sources said the government, in line with diplomatic policy, had to accede to the junta’s decision regarding Kyaw Zwar Minn, after he was locked out of the embassy on Wednesday.

Diplomats loyal to the Myanmar military authorities appeared to have seized control of the embassy, leaving the ambassador out in the street and forcing him to sleep in his car overnight, as anti-junta protesters demonstrated.

The ousted envoy said his defence attache, Chit Win, had taken over the mission in “a kind of coup”, two months after the military seized power in Myanmar.

In a statement read out Thursday on behalf of the ambassador by Min Hein, a member of the Myanmar community in London, he said they had been waiting for a formal response from the UK government.

“We have also learned that Chit Win’s team are threatening the embassy staff with severe punishment if those staff do not continue to work for the military junta,” Min Hein added.

“We condemn the bullying actions of the Myanmar military regime in London yesterday, and I pay tribute to Kyaw Zwar Minn for his courage,” Raab said on Twitter.

“The UK continues to call for an end to the coup and the appalling violence, and a swift restoration of democracy.”

Yemen: Record number of Houthi deaths since the beginning of the year

US Pledges To Slash Greenhouse Gas Emissions In Half By 2030

Previous articleAngelina Jolie Starrer Those Who Wish Me Dead Trailer Is Out
Next articleJames Bond: Regé-Jean Page responds to casting rumours after quitting Bridgerton