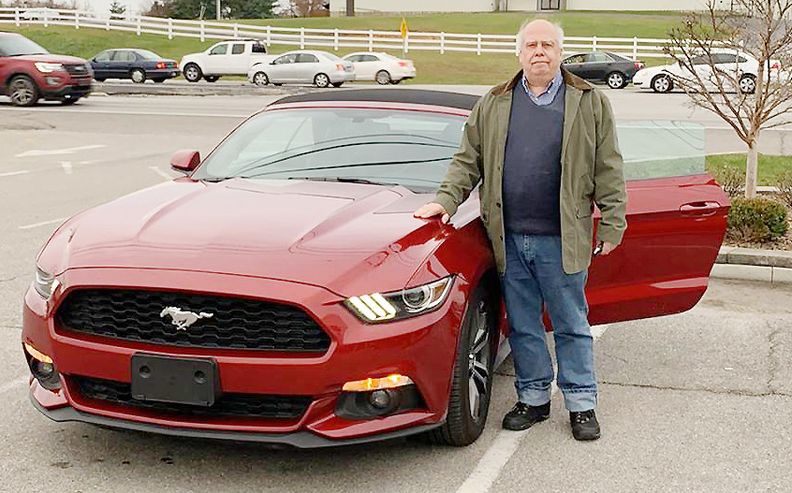 DETROIT — In March, Malcolm Stallons ordered what he figured might be his last car: a 2021 Ford Mustang in Antimatter Blue with white side stripes.

As the May delivery date drew near, Stallons, 67, sold his 2018 Mustang to get ready.

But it’s now June, and Stallons is still without the car. The production date for his Mustang has changed about five times, and Ford now says he won’t get it for at least another month. The global semiconductor shortage has kept the Mustang assembly line down for all but two weeks since mid-April.

It’s a headache customers across the country are facing as inventory keeps dwindling. For Stallons, it’s an especially frustrating damper on what should be a celebratory purchase. After owning seven pony cars through the years — all purchased used — he decided to treat himself to his first new Mustang as an early retirement gift.

“I regret the decision to upgrade every day the weather is nice,” Stallons, who lives in Lexington, Ky., told Automotive News. “At some point, all the fun and excitement will have faded, and I don’t know what I’ll think or do.”

Ford Motor Co. isn’t the only company grappling with the chip shortage, but its dealers, customers and bottom line have been stung particularly hard. May was the worst month for its F-Series pickups in more than nine years, with U.S. sales plunging 29 percent even from last year’s pandemic-scarred volume.

Ford’s overall sales rose 3.7 percent from a year earlier, but the automaker was outsold by Toyota Motor North America, American Honda and Hyundai-Kia. And Ford dealers don’t expect June or July to be any easier, with few truckloads of new vehicles on the horizon.

Ford finished May with a 30-day supply of inventory, down from 35 days’ worth in April and 77 a year earlier.

“Ford and its dealers are working harder than ever to match the right mix of inventory to best meet the needs of our customers at the local level,” Andrew Frick, the company’s vice president of U.S. and Canada sales, said in a statement.

The chip shortage has slashed more than 400,000 vehicles from Ford’s planned production, according to AutoForecast Solutions, with F-Series pickups accounting for a third of that volume. Ford has been unable to build about 15,000 Mustangs, including Stallons’.

Richard Bazzy, owner of Shults Ford-Lincoln group in Pittsburgh, said he had about 70 vehicles left at one of his four stores after record sales in May.

Bazzy said he has been expecting tight inventory for months now — Ford has indicated dealers won’t see meaningful new inventory until the third quarter — and has been able to generate money from other areas of the business, such as parts and service.

“It’s managing the customers and their expectations more than anything,” he said. “A lot of them are very upset that we can’t deliver.”

Other customers are more understanding and willing to pick a second or third choice, according to John Huselton, general manager of Bazzy’s store in Wexford, Pa.

“They’re basically saying, ‘What can I get?’ and not thinking about it very long because if they wait a couple days, that car might not be here,” Huselton said. “It seems like they’re a little more nervous they’re not going to be able to get a car.”

The crisis has taken an outsize toll on the Detroit 3, according to AutoForecast Solutions data. General Motors said last week that its financial outlook for the second quarter had improved and that it had found ways to more efficiently use its limited chip supplies, but executives acknowledged that the company is not yet out of the woods.

GM still can’t say “unequivocally that the situation is getting better,” CFO Paul Jacobson said at a Credit Suisse conference last week, describing the shortage as “fluid and volatile.” The automaker said it was able to pull some chip deliveries forward from the third quarter and will be able to ship by early July 30,000 midsize pickups that initially had been built without chips.

Ford also has tens of thousands of vehicles that it built without chips sitting in parking lots around the country until enough of the missing pieces are available.

“We’re looking into Q3 or Q4 before things turn around,” said Sam Fiorani, vice president of global vehicle forecasting at AutoForecast. “The fear is it could be longer.”

Ford expects to resume production at the Mustang plant in Flat Rock, Mich., the week of June 14, but how it will prioritize orders remains to be seen.

Though Stallons is frustrated with Ford for not warning him about the potential for delays before he ordered his car and sold his old one, his loyalty to the brand hasn’t wavered. He still remembers the moment, nearly 53 years ago, when was cutting the grass at his childhood home and spotted a 1968 maroon Mustang convertible on the corner of the block.

“That beautiful car stole my 14-year- old heart, and it is a love affair that continues to this day,” he said.

While he waits, he has a 2020 Ford Escape to get around in and is eyeing a couple of used Mustang convertibles he might switch to if his production date is postponed further. But he’s worried he would rue the decision to cancel that Antimatter Blue coupe with the white stripes.