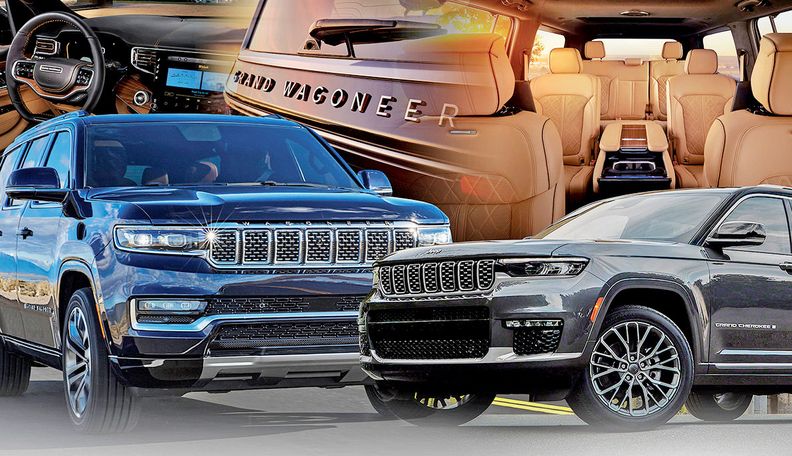 Jeep’s first forays into three-row people haulers and six-figure sticker prices are coinciding with one of the most debilitating supply bottlenecks the auto industry has ever experienced.

The global microchip shortage comes in a high-stakes year for Jeep, with three fresh nameplates joining the lineup and hundreds of dealers preparing to spend big bucks to create dedicated space for the adventure brand.

Stellantis hasn’t indicated that any of its impending launches are in danger, but dealers have been getting fewer deliveries of some other models while assembly lines are halted or slowed. The automaker broached the idea of providing only a single key fob with some vehicles to conserve chips, according to one dealer, but decided against it.

If all goes according to plan, the three-row Grand Cherokee L will arrive in dealerships this summer, around the same time as the upscale Wagoneer and Grand Wagoneer SUVs. Consumers are eager to buy, and dealers anxiously await the chance to wade into lucrative segments as a new era of design and technology dawns for the brand. The new vehicles’ added volume could even push Jeep’s annual U.S. sales over the 1 million mark after coming tantalizingly close in recent years.

Steve Wolf, dealer principal of Helfman Dodge-Chrysler-Jeep-Ram-Fiat in Houston, said he expects the automaker to protect the Wagoneer models, which he dubbed the automaker’s “golden calves,” however it needs to in the face of the chip shortage.

Wolf said he recently got assurances from senior management that the Wagoneer, Grand Wagoneer and Grand Cherokee L will arrive as promised. For now, he has enough Gladiators, Wranglers, Grand Cherokees and Ram pickups to hold him over.

A delay for the Wagoneer, expected to begin production in June, would be a drag, Wolf said, but he could deal with taking a little bit longer to be able to go head-to-head with the Chevrolet Suburban and Cadillac Escalade.

“I’ve been waiting for a full-size SUV since 1989, and I finally got it, so another couple months aren’t going to make that big of a difference,” Wolf said.

“Truthfully, that’s a plus business anyway because we’ve never had a representation in that full-size SUV segment. It’s all incremental business for me.”

If the chip shortage stretches beyond summer, it could complicate the rollout of the redesigned two-row Grand Cherokee in the third quarter.

The Detroit plant that makes the Dodge Durango and two-row Grand Cherokee, Jeep’s top seller, began temporary layoffs last week and will operate with a smaller work force throughout May. The adjacent, newly built plant that will make the Grand Cherokee L has not had downtime.

Plants that build the Chrysler Pacifica, Jeep Cherokee and Jeep Compass were scheduled to remain down this week, Stellantis said. The Ram Classic plant in suburban Detroit that will assemble the Wagoneers went dark in late March and isn’t expected back online for at least several more weeks.

The Grand Cherokee L and burly Wagoneer are among the reasons Wolf has elected to upgrade his dealership with a separate Jeep showroom. He has a list of customers who have ordered a Grand Cherokee L or Wagoneer, with several opting for the Grand Wagoneer’s pricey 4×4 Series III trims that come in at $77,995 including shipping. Fully loaded, the Grand Wagoneer will be the brand’s first-ever stock production vehicle to top $100,000.

In Massachusetts, Kelly Automotive Group opened a sprawling standalone Jeep store on 6 acres last summer, ahead of the brand’s product blitz. The store has 27 preorders for the Wagoneer and Grand Wagoneer.

Group CEO Brian Heney said he’s “cautiously optimistic” that the chip shortage won’t delay Jeep’s high-profile launches or deplete his store’s inventory. Stellantis has kept production going better than expected and weighed giving out just one key fob instead of two as a way to alleviate the supply crunch, he said.

Stellantis seems to have a “strong understanding of what needs to be done and which models need to be fully supported for their sake and their dealer network,” Heney said.

“We control what we can control to the best of our abilities each, day and if delays do happen, we will simply make the best we possibly can out of the situation.”

Dave Kelleher, chairman of the Stellantis National Dealer Council, said the automaker has been “prioritizing volume” of important vehicles to combat the shortage. Still, his inventory is shrinking. He had 127 vehicles on hand last week instead of the typical 650 during this time of the year.

Kelleher’s dealership, David Dodge-Chrysler-Jeep-Ram in Glen Mills, Pa., has been encouraging customers to order vehicles from the factory with the options they want, so a lot of what’s being delivered to his store already has a buyer. He has 117 sold orders in his system right now, compared with 15 in normal times.

He is planning to invest about $5 million to add a separate Jeep showroom soon. He isn’t worried about any Wagoneer and Grand Cherokee L delays.

“I’m not concerned because I think Chrysler is handling it properly, and I think that’s an important thing,” Kelleher said.

“I feel very confident in the conversations that I’ve had with upper management. They know what they’re dealing with, they’ve got a handle on it.”

John Grant, co-owner of the Jeep Only dealership in Las Vegas, is seeing a mix of previous customers and new clients putting in orders for the Wagoneer models. The Grand Cherokee L is getting plenty of interest as well. If those models were held back for a while longer, he wouldn’t like it but said he would just have to deal with it.

“I tell everybody if [the car business] was easy, everybody would do it,” he said. “There’s always a new speed bump in the road. You’ve just got to figure out how to go around it, or slow down and go over it. … The good news is it involves so many manufacturers and models that you’ve got a lot of smarter people than I working on it.”

Previous articleMax Verstappen responds to Nico Rosberg after Portuguese GP and explains Lewis
Next articleUpdate returned 1.003.001 – Details patch on May 3