By Tammy Waldman
July 25, 2021
10
EntertainmentHollywood
This article contains affiliate links, we may receive a commission on any sales we generate from it. Learn more

Captain America The First Avenger was released 10 years and saw Steve Rogers frozen for 60 years before being thawed out in the present day. The World War II hero had barely begun his relationship with Peggy Carter and by the time he was reunited with her she was an old lady. Aside from a brief kiss with her niece Sharon Carter, some Marvel fans have assumed Cap was always a virgin.

In fact, when Avengers Infinity War came out some were concerned Captain America would die a virgin.

But in the end, Steve Rogers survived to the end of Avengers Endgame and went back in time to marry Peggy Carter in an alternate timeline.

So some fans believe Cap only lost his virginity on his wedding night in the 1940s.

However, Christopher Markus and Stephen McFeely, who penned all three Captain America movies, plus Avengers Infinity War and Avengers Endgame, believe Steve had sex before he was frozen.

.Black Widow: Marvel ‘have plans to bring back Scarlett Johansson’ 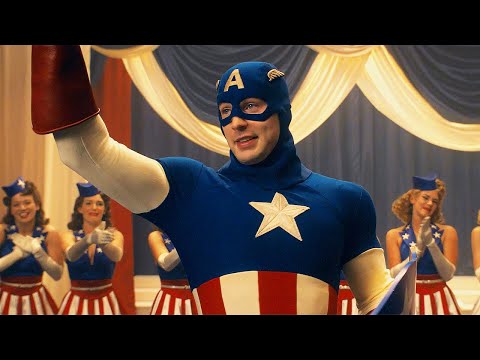 Speaking with Yahoo, McFeely said: “I think he loses his virginity! Why do people think he’s a virgin?”

The screenwriter pointed out that Steve could well have got intimate with a number of women when on his USO Tour promoting war bonds.

He said: “If you look like that, and you’re going to city to city, and you’re signing autographs for the likes of the ladies that he’s signing the autographs for, I’ve got to imagine that [he lost his virginity].”

Markus agreed, saying: “Yeah and the thing to remember is Steve Rogers isn’t a prude.”

Will Old Captain America return to the MCU? (Image: MARVEL)

Markus added: “He may be occasionally presented that way.

“He’s a guy that believes in right and wrong and all these things, but he’s not a choirboy. He’s a World War II veteran.”

As for what happened to Old Captain America after he handed Sam Wilson his shield is anyone’s guess.

The new Cap joked that Steve Rogers had gone to live on the moon, but wherever he is, the Avenger is probably still alive out there in the MCU.

Cap didn’t show up in The Falcon and the Winter Soldier, but we wouldn’t be surprised if he returns in some form one day.

Aside from a chance to show up in Anthony Mackie’s very own Captain America 4, there’s been rumours that Chris Evans could be playing different characters in Doctor Strange in the Multiverse of Madness.

Whatever the case, now that the MCU has introduced time travel and the multiverse, anything is possible.