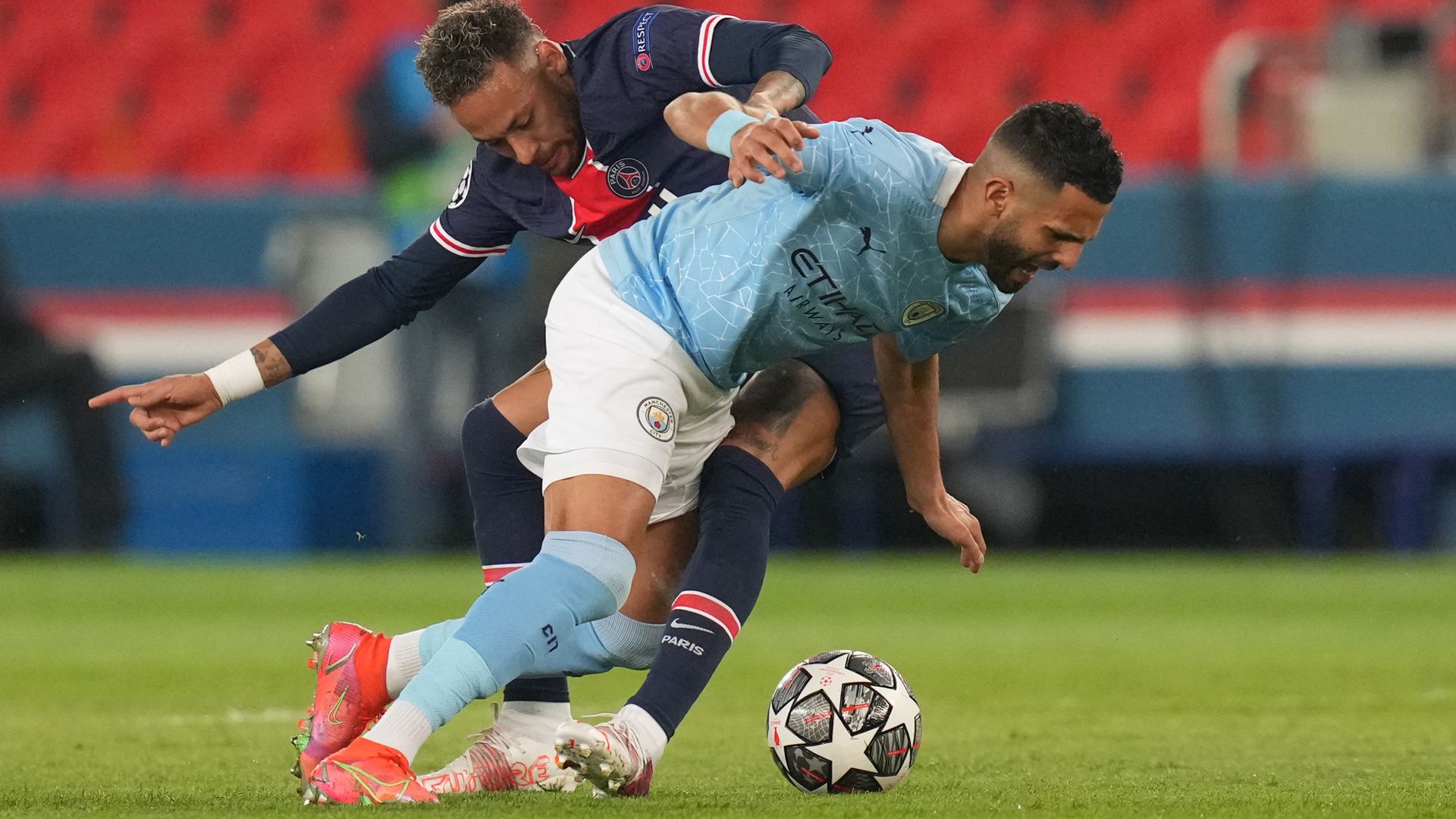 Paris Saint-Germain were hoping their stars would shine in the Champions League semi-final but it was a man born in Sarcelles, on the outskirts of the French capital, who took the game away from them on the night.

Riyad Mahrez’s winner for Manchester City leaves them on course to reach the Champions League final for the first time. The free-kick itself owed a little to fortune as the opposition wall melted into the Paris night, but Mahrez earned the moment with his performance.

The Algeria international has been superb for City this season. Man of the match in the Carabao Cup final at the weekend, he was arguably even better here, in attack and defence.

There was too much of the latter for City to do in the opening stages, but it was vital that Mahrez did it, getting his body in the way to block when Neymar was about to shoot from inside the penalty area. Why was the winger even back there?

Only Joao Cancelo put in more tackles than Mahrez, but nobody had more shots either – and it was one of them that made the difference, persuading Kevin De Bruyne to step aside so that he could seize the occasion.

The man with arguably the best first touch in English football – and there were 74 of them on the night – was always involved, retaining possession with all but two of his 50 passes. He just looks a player full of confidence, playing some of his best stuff at 30.

It is why Raheem Sterling is sat on the bench. While Phil Foden’s form demands his inclusion, Mahrez too has made himself undroppable. On this evidence, he could yet be the key man in the return leg too – and beyond.
Adam Bate

Did PSG panic under pressure?

At the interval, Paris Saint-Germain appeared to have this game where they wanted it, halfway to a clean sheet and having had nine shots to Manchester City’s four.

City deserve huge praise for their comeback but perhaps the most obvious contrast was the differing reactions of the two teams to conceding a goal. While Pep Guardiola’s side stuck to the game plan, their patience paying off, ill-discipline undermined PSG.

The equaliser need not have been so costly but the frustration was palpable with Idrissa Gueye culpable not only for the red card that left his team a man down during the closing stages but the unnecessary foul for the free-kick from which City took the lead.

It was a reaction to the growing control of their opponent – PSG had not touched the ball for almost a minute when Gueye opted to hack Phil Foden down. But the situation was far from desperate. The scores were level. PSG were still having chances.

Ten minutes prior to that foul, Kylian Mbappe had raced down the right and played the ball across the face of the goal only for Marco Verratti to just miss it with his outstretched boot. Soon after that, Ederson had to rush from his line to prevent Mbappe going through again.

With the match in the balance, and with the pressure at its greatest, it felt like PSG’s mentality undermined them rather than the team’s tactics. A poor tackle here, a player turning his back on the ball in the wall there. They were the details that decided the game.
Adam Bate

Is time running out for Werner?

Patience is a virtue and Thomas Tuchel has bucket loads of it when it comes to striker Timo Werner.

No one is doubting Werner’s importance to the way Chelsea play. His movement is world-class. But his finishing is not. Werner scored his first Premier League goal since mid-February against West Ham on Saturday in the 1-0 victory but did also miss with the goal gaping from a rebound. He was at it again in Madrid.

Chelsea should really be taking a lead to Stamford Bridge for the second leg after creating some fantastic openings in the first half – the pick of which dropped to Werner on 10 minutes. However, from six yards out with the chance on a plate for him, he snatched the finish straight at Thibaut Courtois.

Erling Haaland, Karim Benzema and Harry Kane score those chances with their eyes closed. But there were perhaps signs that even Tuchel’s patience is running out. He knows the fine lines between success and failure at the top level, especially in Champions League knockout matches.

Where is the real Eden Hazard?

Unleashing Eden Hazard off the bench with 25 minutes to go would have imparted fear into opposition defences a few years ago. Not now. In fact, it was hard to even notice the Belgian had been substituted on for Real Madrid as they fiddled their way to a 1-1 draw at home to Chelsea. He had only 12 touches of the ball in his cameo and failed to have any shots on goal or make any key passes. This isn’t the Hazard we know.

Up against the club that sold him for around £100million just two seasons ago, Hazard will have been hoping to kick start his season. He barely even kicked the ball. Remember, that move from Stamford Bridge was greeted by 50,000 expectant fans in the Bernabeu. Hazard is yet to show them what he can really do. After a non-existent first season, somehow his second season has been even worse, persistent injuries preventing him gaining any momentum. Hazard was not fit until the end of October and injured again before November was through. Another brief and unproductive comeback was curtailed in January.

Gone are the maverick dribbles, the bustling runs and powerful finishes. To coin a famous Ian Wright Space Jam analogy when discussing England players’ performances in the defeat to Iceland in 2016, it looks as though the Monstars have descended onto Earth and stolen Hazard’s powers. At the age of 30, he is most certainly at the crossroads of his career.
Lewis Jones

Previous article'Sad' BBC blasted by David Allen as 'over-75s radio show' axed: 'Wrong type of listener'
Next articleNomadland streaming: Can I watch the full movie online? Is it legal?