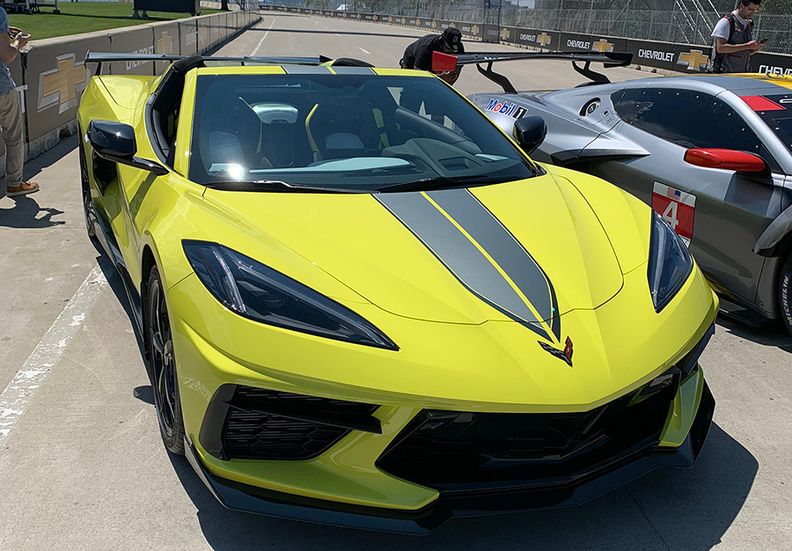 The special edition includes Corvette Racing-themed graphics, including a No. 3 on the back of the yellow edition and a No. 4 on the gray edition.

DETROIT — The 2022 Chevrolet Corvette, on sale later this year, will come with an upgraded fuel system, additional colors and a special edition similar to racing models.

Dealers will begin taking orders for the 2022 model July 1, and production is slated to begin in the third quarter.

The most significant change from the 2021 model year is the upgraded direct-injection fuel system, improved engine calibration and an enhanced active fuel management range, Tadge Juechter, chief engineer for the Corvette, told Automotive News at a media event here.

To meet a new particulate emissions requirement, GM had to reengineer much of the engine and fuel management system, he said. But the 2022 model maintained 490 hp or 495 hp on available performance exhaust systems.

The solution adjusted the way the injectors atomize fuel into the cylinder for the cleanest possible burn, he said.

The 2022 models also come in three new exterior colors: Hypersonic Gray, Caffeine and Amplify Orange Tintcoat. The coupe models start at $62,195, including destination fees, and the convertible starts at $69,695. The International Motor Sports Association (IMSA) GT Le Mans (GTLM) Championship Edition will start at $87,085 for the coupe and $94,085 for the convertible.

Chevy revealed the special edition 2022 model Wednesday ahead of the Detroit Grand Prix June 12. Chevy is returning to the Detroit track for the first time in 13 years. The C8.R Corvette last year competed in the Le Mans in France during the Detroit race.

In 2020, Corvette Racing set the fastest class race laps in six events during the IMSA championship series. Chevy won the GT Manufacturers title – its 13th since 2001 — And the Corvette team won the GTLM Drivers and Team championships.

“Racing has been part of the Corvette’s DNA from nearly the beginning,” Laura Klauser, GM sports car program manager, said in a statement. “Both the Corvette Stingray and C8.R have seen tremendous success capitalizing on the benefits of a mid-engine platform – and we’re just getting started.”

The special edition includes Corvette Racing-themed graphics, including a No. 3 on the back of the yellow edition and a No. 4 on the gray edition. Chevy will build 1,000 special-edition models for left-hand drive markets.

Chevy canceled the remaining 2021 Corvette allocations, and customers who ordered a 2021 model that has not been built will get a 2022 model instead, said Harlan Charles, product marketing manager.

Production at the Corvette plant in Bowling Green, Ky., has been halted a number of times since the midengine 2020 model went on sale in early 2020. The industry has gone through coronavirus shutdowns, the global microchip crisis and other parts shortages.

A parts shortage unrelated to chips stopped Corvette production three times from February to May this year.

But demand for the Corvette has remained strong. U.S. Corvette sales surged 73 percent to 6,611 deliveries during the first quarter. Figures for the first quarter of 2020 were impacted by the initial weeks of the coronavirus crisis.

“We’re still seeing rampant demand for this car. Customers are beating the doors down to get a hold of it,” said Tony Johnson, Chevy director of car and crossover marketing. “This generation has brought new customers not only to Chevrolet, but a younger customer to Corvette overall. And we’re earning high marks of customer satisfaction across the board.”

Previous articleShane Duffy: Republic of Ireland defender has ‘turned a page’ after Celtic loan
Next articleParas Chhabra Exclusively Reveals His Grand Proposal For Mahira Sharma & It’s Straight Out Of Dreams!