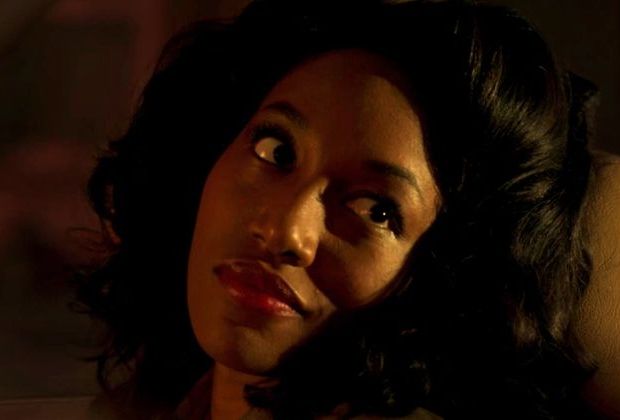 Warning: This post contains spoilers for City on a Hill Season 2, Episode 5.

The chaos began with Anton ramming his car into Decourcy’s luxury sedan.

Stunned and confused, Decourcy and Siobhan had barely recovered from the car accident on last Sunday’s City on a Hill before Anton opened fire on them, missing Decourcy — his intended target — and shooting a pregnant Siobhan instead. Decourcy went into shock as the ambulance sped away and Siobhan and their unborn child fought to stay alive.

If fans of the Showtime crime drama are still reeling from that, Lauren E. Banks, who stars as Siobhan, says don’t worry. She is, too.

“It was surreal to be in the back of an ambulance and to shoot the scene inside one,” Banks tells TVLine. “Putting myself in that place was kind of shocking. When the doors closed on the ambulance for that scene, I was like, ‘Oh, thank God it’s not real.’ I had to suspend my disbelief so that others could. Seeing it fully fleshed out on-screen is surreal, and it really shocked everybody on the set and, from what I can tell, everybody watching.”

“We’ve gotten to know more about Siobhan this season, and people are rooting for her,” Banks adds, while breaking down the growing tension between Aldis Hodge’s Decourcy, her television husband, and his adversary Anton, played by Shannon Wallace.

“It really is dangerous work,” she says. “Anton and Decourcy have real contention between them. That’s why Siobhan had to check Anton when he talked smack about Decourcy, who is the D.A. But it was incredibly stupid to go after Decourcy right after getting out of jail.” 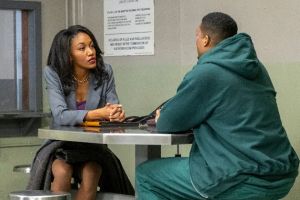 Making matters worse, Siobhan had previously told Anton’s mom Grace to get her house in order, and obviously, she didn’t. Plus, Siobhan had defended Anton against Decourcy in court so that he could get out on bail instead of staying behind bars leading up to his trial. Instead of being grateful, Anton tried to kill Decourcy.

“Dramatically speaking, to see Anton get out of jail and make such a foolish mistake and jeopardize his freedom, Siobhan’s life, Decourcy’s life and their baby’s life is a trip,” Banks reflects. “It also speaks to the fact that it’s really hard to do this work and not find yourself losing something.”

“There’s always a sacrifice to doing the kind of work Siobhan and Decourcy are doing,” she continues. “It’s the sacrifice that comes with trying to make real change. You see that in real life, and you see that on film. And that’s where they are as things get more complicated and scary. Thank God they’re OK.”

Earlier in the episode, Siobhan and Decourcy braced themselves for the chaos ahead, or at least they tried to, the night before the bail hearing. That exchange is incredibly important, Banks says.

“Siobhan and Decourcy are very much a team,” she surmises. “That’s something that they focus on in their relationship because their careers are pulling them in two different directions. In Season 2, you see them at opposite ends of the spectrum when it comes to bettering Boston. Decourcy’s job is to get rid of bad guys, and on the other side, Siobhan feels like the Black community in particular needs an advocate. Neither of them is wrong.” 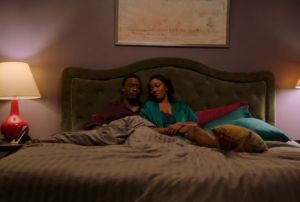 Banks points to the pillow talk the two shared as yet another point of demarcation within their relationship.

“That’s when Siobhan says, ‘The law has to work for everyone, or the law’s a fraud,’” Banks reiterates. “And Decourcy retorts with, ‘Criminals have to be punished, or justice is a joke.’ They’re both right. They’re making the right steps to see eye-to-eye on the things that they believe in, but they don’t believe in anything more than themselves and each other.”

Viewers can expect more of this kind of push and pull in this Sunday’s episode (Showtime, 9/8c), when Siobhan asks Decourcy who shot her and he struggles to figure out if and how to tell his wife it was her own client.

“Siobhan didn’t get to see what the audience saw because she was completely blindsided,” Banks concludes. “You’re going to see Siobhan and Decourcy get really quiet. In circumstances of tragedy, it’s those quiet moments that we as the public aren’t privy to when it comes to couples. We want to draw viewers into that and tell the truth.” 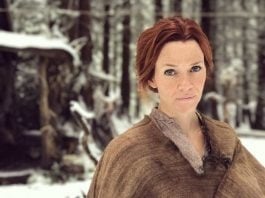 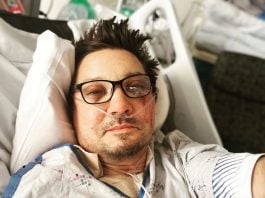