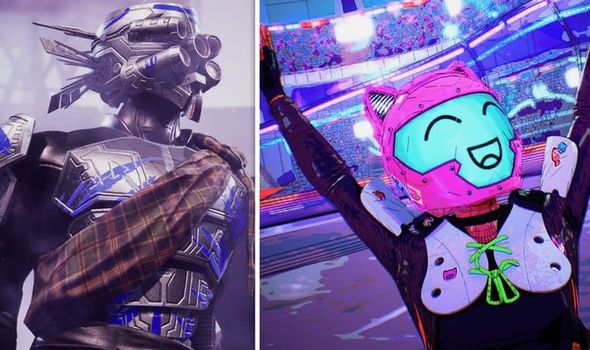 Destruction AllStars Season One – which is titled Hotshots – has a May 5 release date on PS4 and PlayStation 5. Express Online will update this article with the launch time once it’s officially announced.

As part of the new season, the multiplayer driving game will introduce a whole host of new items and cosmetics.

Thats on top of a brand new character named Alba, who’s described as a Destruction AllStars veteran looking to make a return.

“She’s a fierce competitor hailing from Scotland who brings a clear sense of determination to the arena, along with a high-tech armoured battle suit.

“We’ll be learning more about Alba through her Challenge Series which will be released alongside Season One.”

According to Sony, Alba’s on-foot ability summons blockers out of the ground in front of her. The blockers can be used to stop vehicles in their tracks, and to direct traffic away from Alba, as well as loose power-ups and cars.

Elsewhere, Alba’s hero vehicle is called Claymore, which is capable of deploying a laser beam that sweeps and damages AllStars or vehicles in its area of effect.

“These beams can be tactically deployed as you approach an enemy player, or in response to an enemy hero vehicle bearing down on you.”

Similar to games like Fortnite and Apex Legends, the new season of Destruction AllStars will launch alongside a Battle Pass.

“With Alba returning to the competition, our AllStars have decided to roll out the red carpet and get dressed up for the occasion.

Players can unlock the rewards by earning Season Points by completing challenges and playing matches online.

In addition to new characters and rewards, Sony is getting ready to introduce a new Photo Mode and game mode later in the season.

Blitz mode, on the other hand, is described as an evolution of Mayhem, featuring shorter, more intense rounds of action.

“To add more tactical decision making between the rounds, players will need to pick a new AllStar at the start of every round!

“Here’s where things start to get really tactical. In Blitz, your Character Ability and Hero Vehicle energy will carry over from the previous round. You can use this rollover of energy to start your next round with a key advantage.

“Will you pick an AllStar with an aggressive Hero Vehicle and cause carnage in the opening seconds or will you play your cards close to your chest and activate your Character Ability in the final moments for a dramatic comeback? Be sure to coordinate with your team to make sure that your chosen AllStars are robust and able to counter whatever the competition might throw at you.”