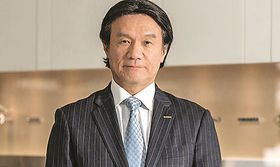 Hitoshi Kawaguchi said he and other Nissan executives worried about a merger with Renault.

TOKYO — After four decades of dedicating himself to Nissan Motor Co., Hitoshi Kawaguchi found himself in 2018 suddenly troubled about the comany’s direction.

Carlos Ghosn, then chairman of Nissan and its French partner, Renault, was maneuvering to orchestrate a merger between the companies.

But Kawaguchi, senior vice president in charge of government relations at the time, and other senior Nissan executives thought that was a bad idea, he testified this month in the criminal trial of their onetime colleague, former human resources officer and Nissan director Greg Kelly.

As a clique of powerful executives grew concerned about Ghosn’s integration plans, Kawaguchi said, they also secretly worked to report allegations of wrongdoing by Ghosn to prosecutors, leading to the longtime leader’s November 2018 arrest.

The executives met two or three times a week in a private lunchroom to consult about the matter, Kawaguchi testified.

But Kawaguchi maintained that these were two separate issues — the merger they didn’t want and the allegations of financial improprieties by Ghosn.

“We never fabricated any piece of evidence to substantiate this crime as a way to stop a merger,” Kawaguchi said in court.

His testimony nonetheless could lend credence to Ghosn’s contention that the criminal charges against him in Japan were concocted by Kawaguchi and a small cabal inside Nissan to block the merger he planned.

Ghosn and Kelly, Nissan’s only American director at the time, were arrested on the same day in a coordinated swoop and charged with scheming to hide more than $80 million in deferred compensation supposedly owed to Ghosn.

Both Ghosn and Kelly deny any wrongdoing, but Kelly was left to stand trial alone in Tokyo after Ghosn jumped bail and secretly fled to Lebanon at the end of 2019.

Kelly faces up to 15 years if convicted.

In his testimony, Kawaguchi, who retired in 2020, claimed that he and two other executives — Statutory Auditor Hidetoshi Imazu and Hari Nada, then head of Nissan’s CEO office — were of like minds when it came to Ghosn’s plan to fold Nissan and Renault together in an “irreversible” alliance. They increasingly perceived Ghosn as a challenge to Nissan’s independence because of his apparent shift in attitude in 2018 toward favoring integration of the two automakers, he said.

Kawaguchi said he saw the existing alliance as effective, and instead of a merger, he favored a rebalancing of the two companies’ cross-holdings to give Nissan more equal footing.

The idea of integrating Renault and Nissan became a flashpoint in February 2018 when Renault moved to renew Ghosn’s contract for four years and made an “irreversible” merger part of his mandate. Kawaguchi testified that opinions on a merger were divided inside Nissan and that the governments of France and Japan had been in discussions about the direction of the alliance.

But even as Kawaguchi, Nada and Imazu opposed the merger, Kawaguchi said, they also began investigating suspicion of misconduct by Ghosn. The probe began with Imazu, who was looking into travel and housing expenditures the company paid on Ghosn’s behalf — even though those matters ended up being unrelated to the crimes Ghosn was eventually charged with.

In the end, Ghosn was charged with improperly reporting compensation, the allegations now at the center of Kelly’s trial. Ghosn faces additional breach-of-trust charges on allegations of diverting company funds for private use. Those indictments are unrelated to the case against Kelly.

Kawaguchi claimed he was pulled into an internal investigation in March or April of 2018. Imazu took their findings to prosecutors in July, bypassing the Nissan board and the company’s then-CEO, Hiroto Saikawa, who was apparently unaware of the probe’s early stages.

In court, Kawaguchi said his group of insiders went to prosecutors instead of Nissan’s directors because they thought their accusations of misconduct would fall on deaf ears at a Ghosn-controlled board.

“We had no other option but to rely on the Tokyo Prosecutors Office,” he said.

Kawaguchi denied that the three colleagues cooked up crimes to frame Ghosn. But to others, the timing seemed all too coincidental.

“We have now proven it,” Wareham said in separate comments after Kawaguchi’s testimony.

“The charge was invented by Japanese both inside the company and inside the government who did not want what Ghosn was heading down the path of, which was a merger with Renault,” he said. “They weren’t sure how to do it. They headed down that path by finding a crime, any old crime. … It was predetermined, preordained. And it was intended to keep Nissan Japanese.”

Even though Kawaguchi helped lead the probe into the allegations, prosecutors apparently saw his testimony as adding little to their case. At trial, they declined to pose a single question to him.

Previous articleFormula 1 2021: Introducing the new season from A to Z after driver, team and
Next article32 all out! New South Wales skittled in Australia’s Sheffield Shield as