Disha Patani treats fans with ‘Radhe’ special filter & we are loving her vibe! Basking in the success and appreciation of her recent outings, Disha Patani has had a busy few weeks with ‘Radhe’ songs releasing back to back.

The actress on Saturday took to Instagram to share a story as she vibes to ‘Radhe’ title track and we are loving her edgy and hot vibes! Jamming to the title track of ‘Radhe’, Disha has put on the ‘Radhe’ filter to treat her fans with another exciting video of hers.

She is seen wearing a grey zipper and the filter gives her a cool bandana and sunglasses to give her an even hotter look. 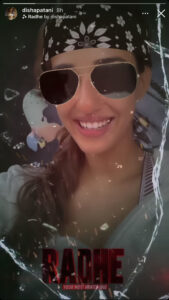 The fans have been treated to Disha’s dance and looks from three songs of the movie so far and one more is set to release this Monday. The film is scheduled to release on the May 13th.

Disha will be seen in ‘Radhe : Your most wanted Bhai’ alongside Salman Khan and Jackie Shroff, Zarina Wahab and Randeep Hooda. She also has ‘Ek Villian 2’ in her kitty.

Previous articleIndian team leave for United Kingdom on 2th of June, players will have families for Companies on Marathon tour
Next articleLigue 1: Neymar helped PSG to reach last season’s Champions League final where they were beaten by Bayern Munich.