Earlier this week, Disney announced some delays for their upcoming Marvel movies. Originally, Doctor Strange in the Multiverse of Madness was set to hit cinemas on March 25, 2022, but has now been shifted back to May 6. As a result, there’s been a domino effect with other MCU blockbusters moving back and taking each others’ release dates.

As for why there’s been such a delay, Beyond The Trailer’s Grace Randolph has spoken with her Marvel sources who claim that production on Doctor Strange 2 needs more time.

On her YouTube channel, Grace commented on both Multiverse of Madness and Spider-Man: No Way Home, which is still set for release on December 17, 2021, although she says she wouldn’t be surprised if that’s delayed too.

The comic book movie commentator said: “I’m hearing both these movies, which are both multiverse movies are kitchen sink movies.

“And test audiences that have seen them to date have felt the stories in both cases need some work.” 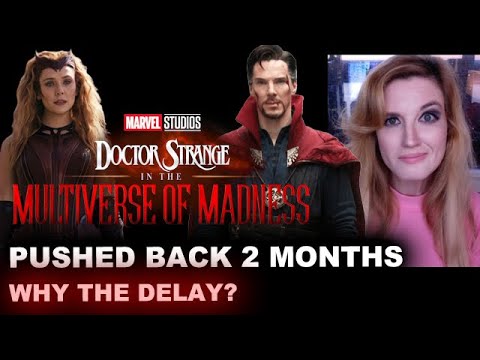 “I hear not only to fix those story problems, which I hear were significant but to add a lot more characters.

She teased that from what she knows from her sources there are some pretty cool characters due to show up as part of the comics group Illuminati that will make fans “go wild”.

Doctor Strange in the Multiverse of Madness follows on May 6, 2022 (Image: MARVEL)

Now Disney owns the rights to Fox, there is much speculation that some Fox X-Men characters might show up in Doctor Strange 2.

One rumour is that Sir Patrick Stewart’s Professor Charles Xavier is in the movie.

Grace continued: “But overall this is still playing very much as a Doctor Strange movie and not like a de facto Avengers movie like we’ve seen the case of some other standalone films.

“[It’s] very Doctor Strangey and that’s not really how I think it’s been sold. But don’t worry, Marvel realises this and they’re like, ‘We need more characters’, so they’re putting them in.”

On the Marvel movie’s delay, Grace added: “But that means that the movie with all these reshoots needs to edit all those reshoots and do post-production on all those new reshoots and all the characters being added. That’s a lot of work.”

Aside from reshoots, the movie expert pointed out there could be an issue of Spider-Man No Way To Home releasing only three months prior to Multiverse of Madness.

Spider-Man: No Way Home hits cinemas on December 17, 2021 and Doctor Strange in the Multiverse of Madness follows on May 6, 2022.

Previous articleAaron Rodgers Doesn’t Regret ‘I Own You’ celebration in Green Bay Packers win
Next articleFloods, landslides kill more than 150 in India and Nepal | Floods News