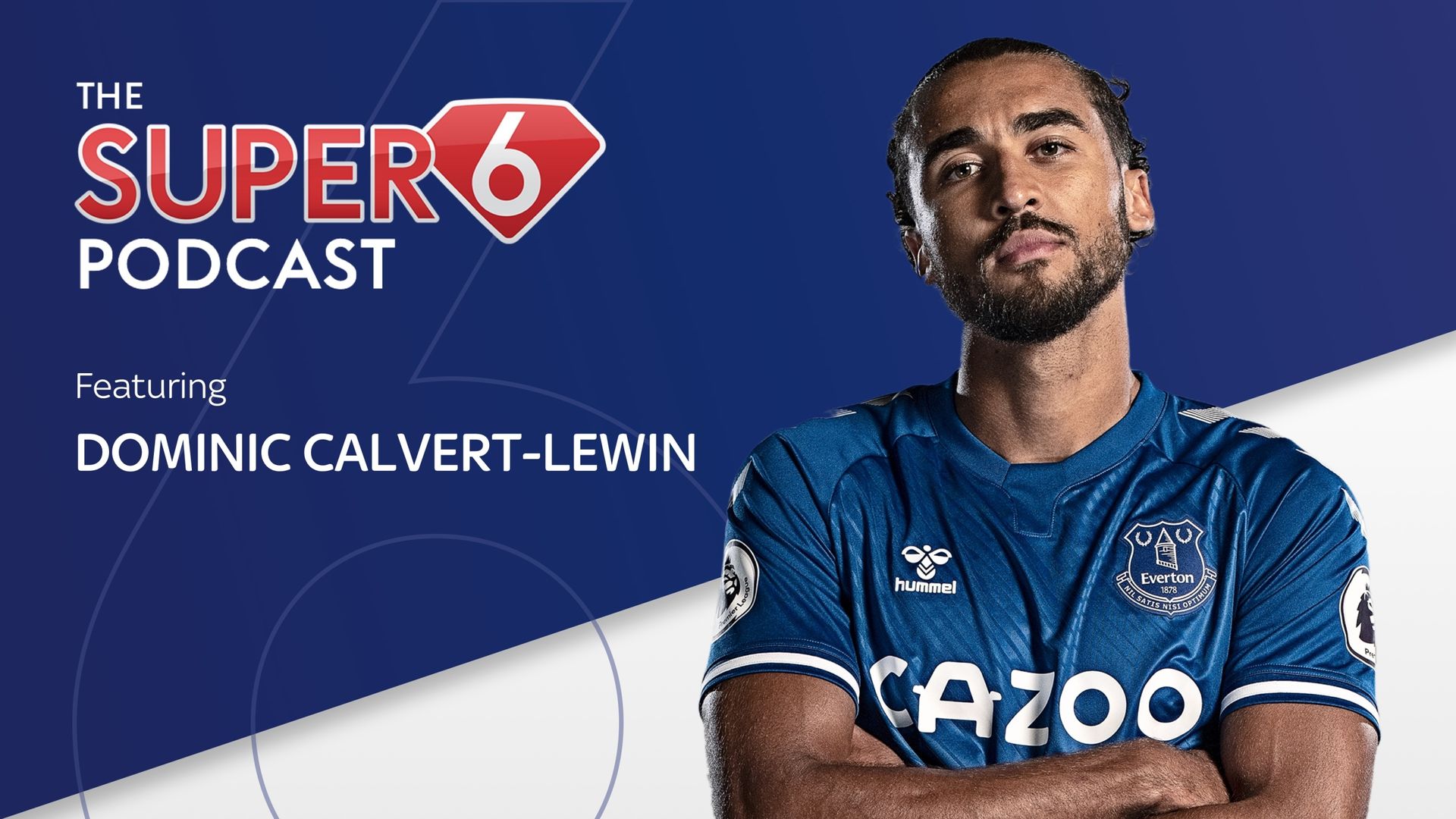 Dominic Calvert-Lewin is the latest Premier League player to join Laura Woods and Bayo Akinfenwa on the Super 6 Podcast.

Calvert-Lewin has 14 Premier League goals to his name this campaign as Everton – only five points behind fourth-placed Chelsea and with a game in hand – bid to finish in the Champions League places.

The striker is currently with the England squad as they prepare to take on San Marino, Albania and Poland on the road to the 2022 World Cup but, ahead of international duty, he took the time to talk all things England and Everton on the Super 6 Podcast.

Calvert-Lewin was handed his England debut and first international start in a comfortable 3-0 victory over Wales, grabbing a goal after just 26 minutes. That moment alone was a culmination of hard work and desire, Calvert-Lewin explained.

“When I scored the goal there were no fans, so there wasn’t that raw emotion or adrenaline rush, but when the ball hit the back of the net and you heard the little roar from the players in the stadium and the coaches, I looked to the sky,” he told the Super 6 Podcast.

“If you can imagine you have thought about something your whole life, and you have invested everything you have got into achieving that moment, and then the ball hits the back of the net for England and you are wearing the number nine shirt. It was relief really, to know that I have scored on my England debut.

“The whole scenario didn’t really hit me until I got home. I was in a bubble of one thing after another, thinking about the next game, I scored and was doing interviews. It was a whirlwind, but to achieve that on my debut, I was thinking how proud my family would have been. I couldn’t wait to speak to my mum and dad just to say I have done it, nobody can ever take that away from me!”

Reading out his England text message for the internationals coming up, Calvert-Lewin relived his excitement at hearing his phone ping from Southgate for the first time.

“The first time I got called up, I know the lads who have been called up for England before they get a text message an hour before the squad is announced,” he said.

Southgate’s England side boasts plenty of attacking talent but who impressed the Everton striker the most during his last spell away with his country?

“He is a naturally gifted footballer and for me, he is a joy to watch. If I could watch any player play, it would be him. He can do everything – he is exciting and tries to make things happen. I see him up close in training – because he is a relaxed guy, as soon as he is on the training pitch and the ball comes out, he is operating on a different level.

“For me to play with him as a centre-forward, they are the type of guys you want to play with because he is making things happen and he set my debut goal up. It was only a matter of time until he got his chance, he just had to stay consistent and keep doing what he was doing. When he played I thought he played really well.”

From the suit and tie in the rain at Old Trafford to hugging the ball boy, Duncan Ferguson has been right at the very centre of all things Everton, even after he left the field of play as a player.

Calvert-Lewin explained how influential the current assistant coach had been on his career.

“Big Dunc has been the best possible mentor. He was in the first team when I joined as a 19-year-old and he is still there now, so he has been behind the scenes with me from the start to now,” said Calvert-Lewin.

“I had the number nine shirt at the start of the season. When he became the manager, he made me feel like the number nine. It was the confidence boost that I needed. He pulled me aside and said I was playing on Saturday, ‘you’re my number nine, you’re my man.’ That was all I needed to hear because I had never heard that before from anybody.

“That put confidence in myself, and thankfully I was able to repay him with a couple of goals against Chelsea. More than anything, he has been an ear for me to speak to whenever I have needed to, through the highs and lows. When I am going through a bit of a goal-drought he’s saying ‘you’re the man, you’re the man, keep plugging away’.”

The stick and criticism

Although the Everton striker is in the form of his life at the moment, he has had his fair share of criticism during his career, from being a youngster at Sheffield United to an established first-team player at Everton.

“I experienced it at Sheffield United, where there were rumours that Everton were coming in for me and I was going there for a million pounds,” he said.

“One thing I would say to young players is to flip it on its head and use it as motivation to prove people wrong, that is what I have always tried to do.

“I went to Everton, and it’s levels – the higher up you get, you are under more and more scrutiny as a football player. You have to learn to deal with it at that scale and gradually progress to be able to deal with it at an even higher scale.”

Listen to the full episode with Laura and Tom Cairney on Spotify or on Apple Podcasts now! Stay tuned for the upcoming shows, which are available on all channels every Thursday.

If you missed earlier episodes, don’t worry. You can listen back to interviews with Jamie Carragher, Conor Coady, Michail Antonio, Declan Rice and Stuart Dallas, on YouTube or on Apple Podcasts.

No international break for Super 6!

You too can get involved with Super 6, as another round takes place on Saturday. Correctly predict the six scorelines to land yourself a quarter of million pounds, FOR FREE! Make sure you have entered your selections by 3pm Saturday.

Previous articleIndia v England: KL Rahul was confident that the next Indian player from Karnataka would be Prasidh Krishna
Next articleRanveer Singh’s infectious smile in the new Insta post is sure to brighten up your day!