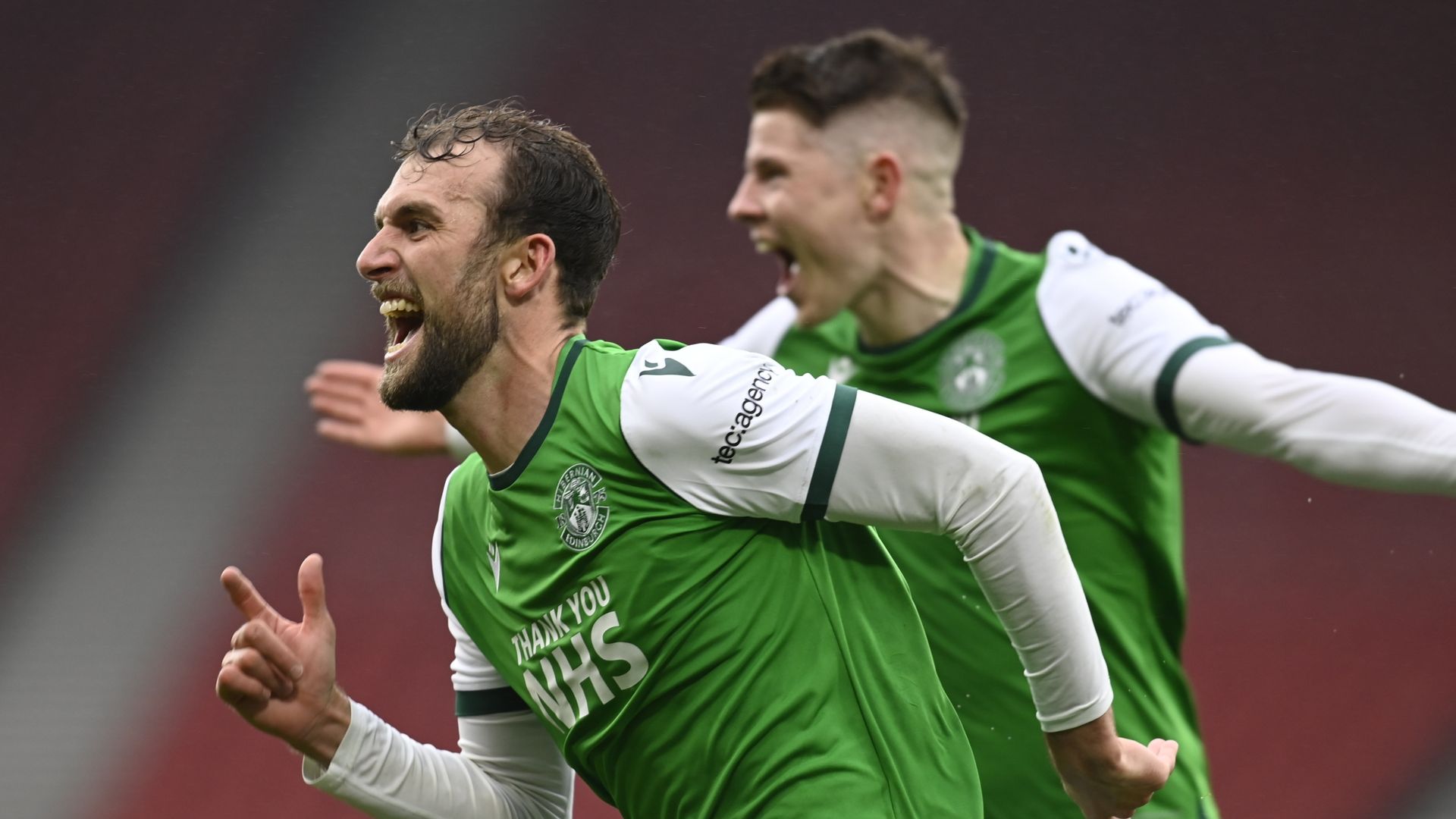 Hibernian secured a Scottish Cup final place for the first time in five years with a convincing 2-0 win over Dundee United at rain-soaked Hampden Park.

Scotland cap Kevin Nisbet’s delightful finish from just outside the penalty area in the 27th minute gave Hibs a deserved interval lead in an open semi-final.

Fellow striker Christian Doidge added a second in the 58th minute despite looking offside to keep up his record of scoring in every round.

Micky Mellon’s men, insipid until that point, came to life, but the damage was done and they will return to Tannadice to lick their wounds.

Hibs had lost two semi-finals this season – and five since they won the Scottish Cup in 2016 – but were in no mood for any more disappointment.

Jack Ross’s side play either St Mirren or St Johnstone, who face each other at the national stadium on Sunday, in the final on May 22. Hampden Park had not been a happy hunting ground for the Leith men this season.

The Easter Road side, with goalkeeper Matt Macey, midfielder Melker Hallberg and Nisbet back in the side, looked lively in the early stages.

In the 10th minute Hallberg thundered in a drive from 25 yards which whistled past Deniz Mehmet’s left-hand post. United, for their part, looked dangerous on the counter and moments later midfielder Ian Harkes headed over from a Marc McNulty cross.

Harkes had earlier been left frustrated by an over-hit pass from Lawrence Shankland inside the Hibs penalty area following a break. But then Nisbet struck.

In the 26th minute his shot on the turn from 16 yards saw the ball just miss the far post. That was him just setting his sights. A minute later he took a pass from midfielder Jackson Irvine 20 yards from goal and with precision he steered a low shot past Mehmet and into the corner of the net.

It was a terrific finish and, with the European Championship coming up next month, would have been noted by Scotland boss Steve Clarke.

Hibs took a tighter grip of the game and Nisbet, buoyed with confidence, was wayward with a long-range effort just before the break.

United had it all to do in the second half, not least in testing Macey. The Hibs keeper watched Nicky Clark’s free-kick from 25 yards fly high over the bar and the United attacker was soon replaced by Adrian Sporle.

The Easter Road side’s second goal had a look of offside about it. Martin Boyle took a flick from Nisbet and slipped in Doidge, who looked as if he had gone too early, but he stuck to his task and guided his shot low past Mehmet.

United reacted at last. Shankland drew a save from Macey with a near-post drive before McNulty fired just wide of the target from 20 yards. Then, in the 67th minute Jamie Robson volleyed a Liam Smith cross past the post from 12 yards.

But in pushing forward, gaps were left and only a last-gasp tackle by Smith denied Boyle on the break.

A fizzing 20-yard free-kick from Nisbet, after Boyle was fouled by Ryan Edwards, was pushed over the bar by Mehmet, but the Terrors defended the corner.

Hibs threatened to increase their lead. Jamie Murphy replaced Nisbet and his powerful drive was pushed past the post at full stretch by Mehmet. At the other end, Shankland had another effort in injury time saved by Macey to end any hope of an unlikely comeback.