Next month sees the release of Spider-Man: No Way Home, which will be the 27th MCU movie since Iron Man hit cinemas back in 2008. Over the years there have been some great cameos in the Marvel movies. But did you know that the richest man in the world played himself opposite Robert Downey Jr?

The reason Elon cameoed in Iron Man 2 was that Downey Jr had consulted him about playing Tony while shooting the original movie.

When preparing for filming, the star and director Jon Favreau (who also plays Happy Hogan), were given a tour of Space X by the billionaire in 2007.

According to Bloomberg, the Iron Man star had heard about a Howard Hughes type who had built his own industrial complex around 10 miles from the Marvel set.

Downey said: “My mind is not easily blown, but this place and this guy were amazing. It felt like a radical startup company. Things didn’t feel out of place.”

Unlock unlimited access to the Disney+ catalogue – from Walt Disney animation films to Pixar, Marvel and Star Wars blockbusters, and National Geographic shows. New exclusive boxsets, like The Mandalorian and WandaVision, are also available to stream and download to your iPhone, iPad, or Android devices.

You can cancel after one-month | Subscription cost after first month at £1.99 returns to £7.99

Downey had lunch with Elon in his office and picked up on the billionaire’s “accessible eccentricities”.

The star would go on to request that a Tesla Roadster feature in Tony’s workshop in Iron Man.

He added: “They became contemporaries. Elon was someone Tony probably hung out with and partied with, or more likely they went on some weird jungle trek together to drink concoctions with the shamans.”

As a result, he would be offered a cameo in Iron Man 2, which fans to this day are surprised was there all along. 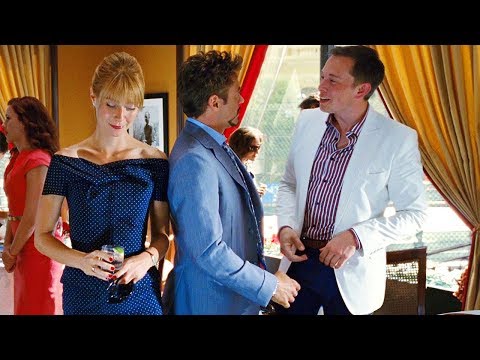 The scene in question was a drinks reception in which Iron Man and Gwyneth Paltrow’s Pepper Potts are greeted by Scarlett Johansson’s Black Widow.

When Tony is requesting a table, Pepper says hello to the real-life billionaire saying: “Mr Musk, how are you?”

Elon gets up, shakes her hand and says: “Pepper, congratulations on the promotion.”

Suddenly Iron Man comes over, does the same and says to him: “Those Merlin engines are fantastic!”

Iron Man says, “You do? Then we’ll make it work!”, before wandering off with Pepper again.

One of the most liked comments on the Iron Man 2 clip with 1.4k thumbs up proves that even the most devoted Marvel fans had never noticed that the South African inventor was in the movie.

West Side Story: Steven Spielberg on film’s touching connection to his dad who died at 103

Previous articleThe Turkish lira drops to the lowest level in history … and Erdogan: “maneuvers are being hatched”
Next articleEurope must resist the ‘blackmail’ of Belarusian migrants, Austria says