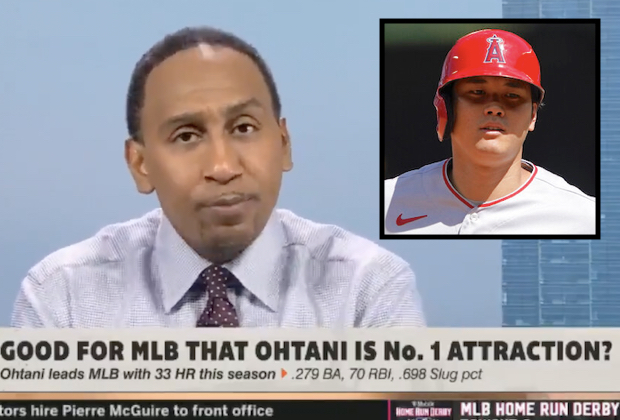 ESPN host Stephen A. Smith on Monday said that celebrated Los Angeles Angels pitcher Shohei Ohtani is “harming the game” of baseball because Ohtani, who is Japanese, uses the help of an English translator during press conferences.

Smith’s comments were made during First Take, during a discussion of Ohtani, whose ERA is 3.49 and who will both pitch and hit in the upcoming All-Star Game — the first player in Major League history to be chosen for both positions.

“This brother is special, make no mistake about it. But the fact that you’ve got a foreign player that doesn’t speak English, that needs an interpreter, believe it or not I think contributes to harming the game to some degree when that’s your box office appeal,” Smith said. He suggested that, instead, “It needs to be somebody like [Philadelphia Phillies’] Bryce Harper, [Angels’] Mike Trout, those guys. And unfortunately, at this moment in time, that’s not the case.”

Smith also said: “But when you talk about an audience gravitating to the tube, or to the ballpark, to actually watch you, OK? I don’t think it helps that the Number 1 face is a dude that needs an interpreter so you can understand what the hell he’s saying.”

After Smith’s comments were criticized on Twitter, he released a clarification, stating that he was addressing “the marketability and the promotion of the sport” and not Ohtani’s language abilities, specifically. “… In the United States, all I was saying is that when you’re a superstar, if you can speak the English language, then guess what? That’s going to make it that much easier and less challenging to promote the sport.”

On my earlier comments about Ohtani pic.twitter.com/FM0vnDDXBB

Previous articleWhen I’m Space Jam: A New Legacy, The Suicide Squad, Reminiscence and more are you coming to HBO Max?
Next articleMusk tells court he dislikes being Tesla CEO as SolarCity trial opens in Del.