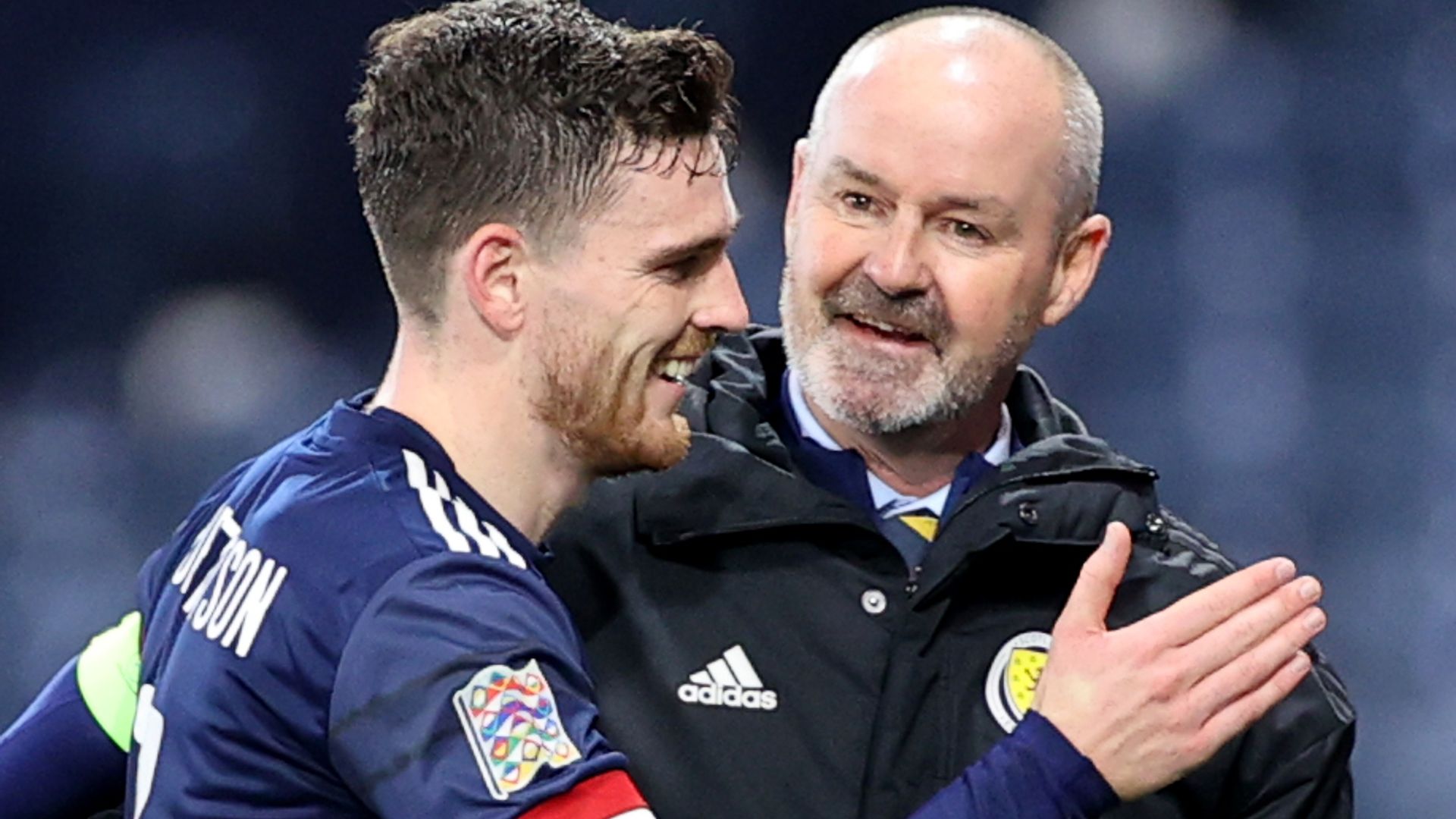 Steve Clarke and Andy Robertson believe Scotland can cause the Netherlands problems in their first warm-up game ahead of the European Championships.

Clarke’s team come up against Frank De Boer’s side live on Sky Sports on Wednesday with Scotland preparing for their Group D encounters with the Czech Republic, England and Croatia later in June, in what will be the country’s first major tournament games for 23 years.

Scotland, who have been enjoying a pre-Euros training camp in Portugal and also face Luxembourg in another friendly on Sunday, go into Wednesday’s game at the Estadio Algarve undefeated in three matches following two draws and a win in their March 2022 World Cup Qualifiers.

Clarke told Sky Sports News: “We want to be at our best in the tournament and that’s still a little bit away so we’ll use the two friendly matches to try and get better.

“I think when you look at Group D and the opposition we’re up against, England and Croatia are World Cup finalists and semi-finalists, Czech Republic we all know are a really good team, we played against them recently so we expect tough games.

“The game against the Netherlands should stand us in good stead for the tournament.”

Billy Gilmour and Scott McTominay are arriving late at Scotland’s camp after the pair were involved in Chelsea and Manchester United’s squads for the Champions League and Europa League finals.

John Fleck has been ruled out of Wednesday’s warm-up game after testing positive for coronavirus, but Scotland head coach Clarke insists his fellow midfielder Gilmour and the two other uncapped players, David Turnbull and Nathan Patterson, can all force their way into contention for the Euros.

Clarke said: “Every time we come together I’m saying to the lads that everyone is important, you never know when you’re going to be asked to play, especially in these uncertain times.

“So hopefully they can keep impressing, they’ve all been impressing me so far in training. It’s nice we’ve come over to Portugal, Billy Gilmour has just joined the squad, Scott McTominay is on his way, so we’re getting the group together and we’re looking forward to the games.

“We [me and Gilmour] need to have a little chat, he’s been training up until the Champions League final so we need to find out how much he celebrated, I’m sure he celebrated a lot.

“But he’s young enough so if I put him on the bench then I’m sure he could handle it, but it’s a conversation I’ll need to have with Billy.”

Robertson, who will skipper Scotland at the Euros and could earn his 44th cap against the Netherlands, believes they can cause the Dutch problems and thinks his team can use the opportunity to underline their potential.

The Liverpool left-back said: “We’re all at different stages but tomorrow will be important for us and stand us in good stead for what’s to come ahead.

“You want to test yourselves against the best and the Netherlands are certainly right up there, a fantastic nation with some real good quality players.

“We’ve been really good at that over the last 18 months to two years and we need to continue it onto the biggest stage in two weeks’ time.”

Robertson is set to come up against Liverpool team-mate Georginio Wijnaldum, who appears certain to leave the Reds after saying an emotional goodbye to supporters when he was subbed off during their final game of the season against Crystal Palace.

Barcelona and Bayern Munich are trying to sign the midfielder on a free transfer this summer.

Robertson said: “The last time I saw him it was quite emotional, him saying goodbye to Anfield, Liverpool, his team-mates, the people who he has worked with for so many years, the fans.

“It was emotional after the game so it will be good to speak to him. It’s not looking likely that he’s going to stay at Liverpool that’s pretty clear and it’ll be good to talk to him.

“Liverpool is a bit like this Scotland squad, we’re all close and get on really well and me and Gini have been through it all.

“Especially this season we were the only ones I think who didn’t get injured and we went through the good, bad and the ugly of Liverpool this season. We’ve probably grown closer and it’ll be good to say a proper goodbye.”

Previous articleLove And Thunder Star Chris Hemsworth Announces Wrap With His Massive Bulging Biceps; Says, “The Film Is Gonna Be Batsh*t Crazy”
Next articleAyushmann Khurrana Shares A Glimpse Of His Pandemic Survivors Kit …