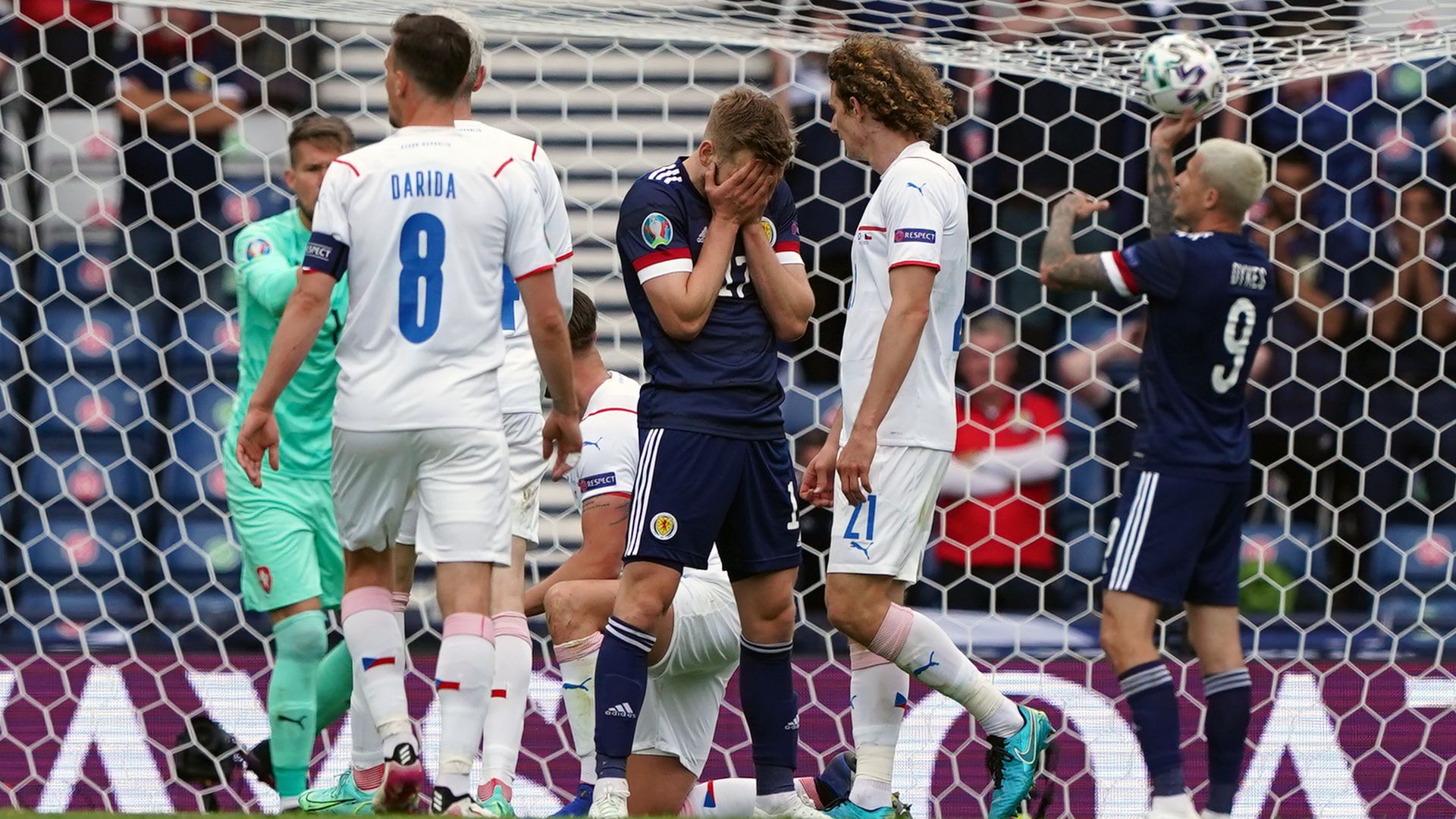 Have toothless Scotland blown their chance?

John McGinn admitted Scotland would have to “do it the hard way” after their most straightforward game of Euro 2020 ended in defeat and left them with an uphill struggle to qualify from Group D. He wasn’t wrong.

Facing the Czech Republic, a team only four places above them in the FIFA rankings who finished just two points above them in their Nations League group, was not so much must-win as must-not-lose as Steve Clarke’s men returned to the big time after 23 years.

Even conceding two defensively frustrating goals, one from a poorly defended cross and the other a wondergoal still owing something to some ridiculous defensive positioning from David Marshall, might not have been fatal had the hosts taken their chances at Hampden Park.

Lyndon Dykes should have beaten Tomas Vaclik from close range and Andy Robertson had to at least test him as the Scots saw opportunities come and go in either half.

Considering this was not even a first-choice Czech defence, owing to Ondrej Kudela’s ban from UEFA competitions, they needed to be better. Clarke was not giving away any state secrets saying his side “needed to be more clinical”, because if they can’t do it against a backline including Bristol City’s captain, can they do it against England or Croatia?

There could yet be a twist in the tale – the ‘local’ rivalry between England and Scotland will play its own part in Friday’s showdown at Wembley, and World Cup runners-up Croatia are not, as we saw on Sunday, the same team as they were three years ago.

But on this evidence that doesn’t look like enough. Scotland need to win at least one of those games to stand any hope of qualification. If their finishing continues in the same vein, they haven’t got much of a hope.
Ron Walker

Luis Enrique will be wondering how Spain didn’t score against Sweden.

The three-time European champions totally dominated Sweden, passing Janne Andersson’s side into submission at times, but Spain’s lack of a clinical striker proved costly as they were held to a 0-0 draw.

Alvaro Morata was the biggest culprit, spurning two gilt-edged chances, one in each half as Spain opened their tournament in frustrating fashion.

He wasn’t the only one, though, as Spain had 17 shots against Sweden, their highest tally in a major tournament game (European Championships + World Cup) without scoring since having 25 attempts against Switzerland in a group stage defeat at the 2010 World Cup.

Spain went on to win that tournament after the defeat to Switzerland, but if they are to bounce back again at Euro 2020, they will need to find a solution to their issues in front of goal.

17 – Spain had 17 shots in tonight’s draw against Sweden, their highest tally in a major tournament game (European Championships + World Cup) without scoring since having 25 attempts against Switzerland in a group stage match at the 2010 World Cup. Stalemate. #EURO2020 #ESP #SWE pic.twitter.com/BbvT0vopUn

Gerard Moreno, who has scored 30 goals this season for Europa League winners Villarreal, was left on the bench until the 74th minute but after a bright finish to the game, he will surely come into contention when Spain face Poland on Saturday.

Overall, Spain’s performance was excellent. A 0-0 draw against Sweden in the opening game of the tournament is not all that bad, but they will have to be much more clinical if they are to go deep into this tournament.
Oliver Yew

1 – Spain completed 419 passes in the first half against Sweden, the highest figure in the opening 45 minutes of a European Championship game since we have this data available (1980). Control. #EURO2020 #ESP #SWE

Could Slovakia be the Euro 2020 underdogs?

Major tournaments always seem to have that side that go on a sensational run and reach much further than anyone expected. At Euro 2016, it was Wales. But this time around, could it be Slovakia?

Poland were the heavy favourites heading into their Group E clash on Tuesday, but they could not find a way past a well-drilled Slovakia. Recent Serie A winner Milan Skriniar was imperious at the back and scored a sensational goal.

And let’s make no mistake about it – Slovakia deserved to win. They saw the better chances throughout and neutralised the danger of Robert Lewandowski.

Slovakia manager Stefan Tarkovic said after the game: “We had analysed the Polish style of play in great detail. Poland play a lot down the left side, but Lukas Haraslin made a great effort to snuff out that threat.

“We are a small country and I am very happy we have managed to achieve such a result against such a big and important country. This result means a lot to me, but it doesn’t mean we have already advanced.”

With Spain and Sweden playing out a 0-0 draw, Slovakia now top Group E and are in a perfect position to qualify for the knockout rounds for a second successive European Championships.

Underestimate them at your peril…
Charlotte Marsh

Ahead of Euro 2020, Robert Lewandowski blasted the football schedule since the restart last year.

“So many people forget we’re humans, we’re not machines, we cannot play every day at the highest level of performance,” Lewandowski , who has now played 61 matches for club and country since last May, told The Times.

“For football and for young players, that will be the big problem, to stay at the top for many years, because now and maybe the next two years, that will be extreme: so many big games.”

But despite another record-breaking season with Bayern Munich, perhaps the fatigue was starting to show with Lewandowski anonymous for much of the game. In fact, the striker has scored with just two of his 35 shots for Poland at major tournaments (12 apps across European Championship and World Cup competitions), failing to score with his last 17 attempts for his national side in such games, since netting against Portugal at Euro 2016.

Of course, he will be the main target for many defences at Euro 2020, and Slovakia marshalled him to great effect. But with such talent, Poland will be hoping he comes good for them over the next few weeks as they look to qualify from the bottom of Group E.
Charlotte Marsh