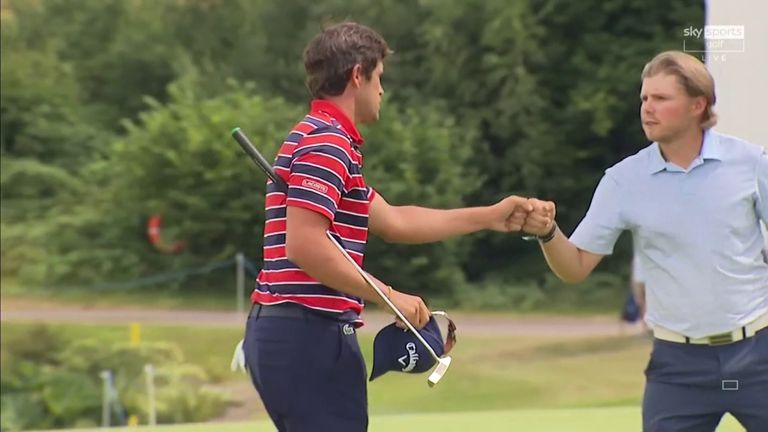 Nacho Elvira moved into a two-shot lead at the European Tour’s Cazoo Open, as the Spaniard’s younger brother, Manuel, moved into contention at the Italian Challenge.

The overnight co-leader bounced back from an opening-hole bogey to card a second-round 67 and move to 11 under, bolstering the 34-year-old’s hopes of claiming a maiden European Tour title.

Elvira’s younger brother, Manuel, was also on 11 under after 36 holes on the Challenge Tour, with both siblings briefly leading their respective events at the same time until Frederic Lacroix moved one ahead in Italy.

“It’s unbelievable,” said the older brother, who has made just two of his last 11 cuts. “He’s been playing great. It’s awesome that we are both 11 under and leading, it’s interesting – that must have never happened before.

“To be 100 per cent honest, I don’t really care where I end up. I’m happy with how I’m trying to turn my game around, especially my mind around. So we’ll see what that brings.”

Elvira had mixed six birdies with two bogeys during his second round in Wales to pull clear of fellow overnight leader Vincent Norrman, playing just his third professional event, who birdied four of his last five holes to card a two-under 69.

Japan’s Masahiro Kawamura carded the lowest round of the day by four shots and moved into third after a eight-under 63, with England’s Matt Wallace – the highest-ranked player in the field – four behind as he looks to force his way back into Ryder Cup contention.

“This is why I’m here. I need a really good result – I don’t think second is enough to get me into the WGC. This is my goal for the week and hopefully I can have a few less mistakes – I’m playing well enough to give it a run this week.”

Watch the Cazoo Open throughout the weekend live on Sky Sports. Live coverage begins on Saturday from midday via the red button on Sky Sports Golf.

A brief return to Pele in intensive care

Previous article'Why were you so bad?’ Clare Balding teased by wife Alice over ‘awful’ WWTBAM performance
Next articleLandslides in India .. 36 dead and dozen missing