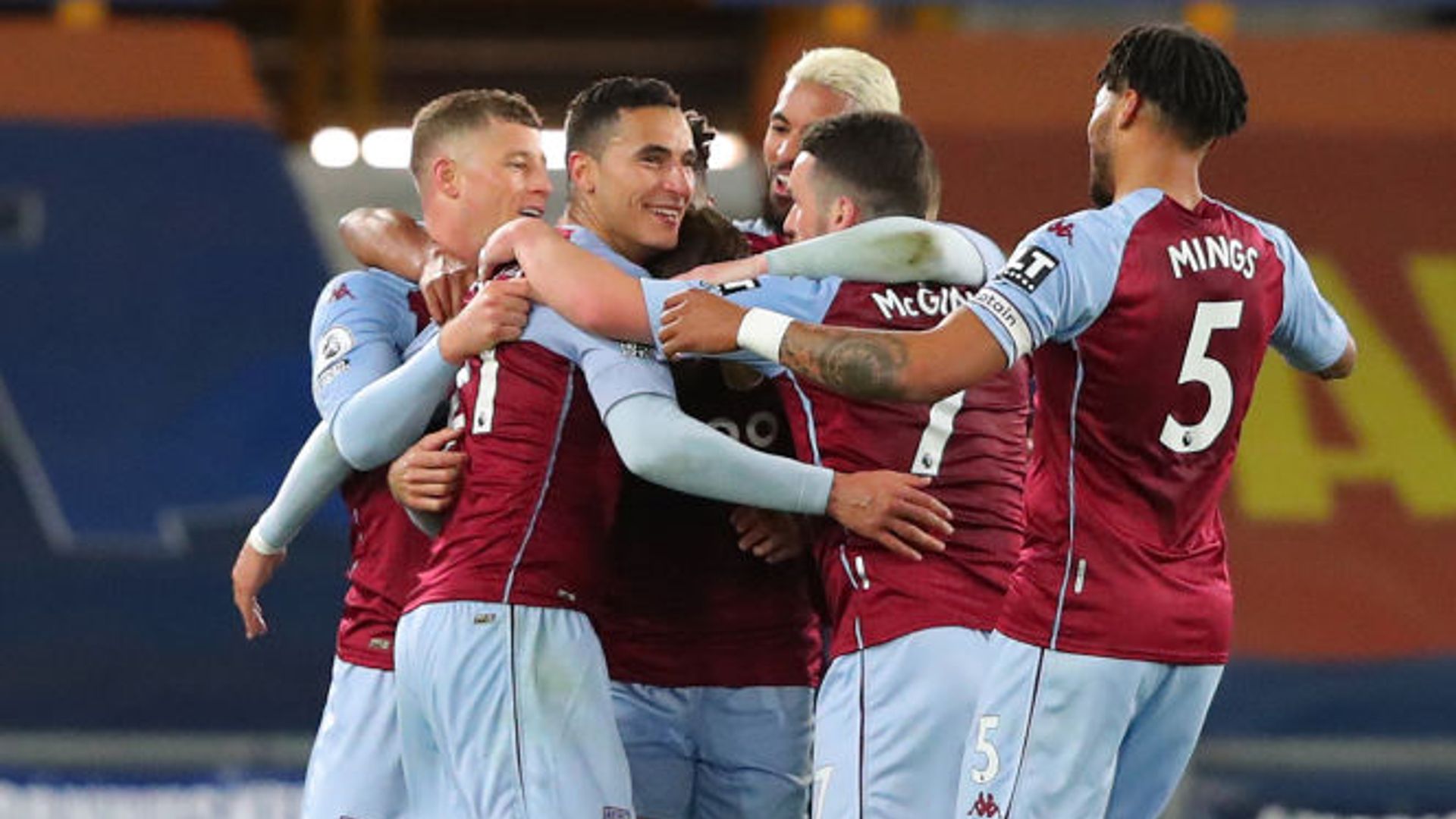 Ollie Watkins’ 14th Premier League goal of the season put Villa ahead after a mistake from Mason Holgate (13) but Dominic Calvert-Lewin restored parity when he met Lucas Digne’s corner (19).

But with the game meandering towards a draw, El Ghazi was afforded too much time to curl a shot into the far corner to clinch an eighth Premier League away win of the season for Dean Smith’s side.

Man of the match: Ollie Watkins.

This was the 205th top-flight meeting between Aston Villa and Everton, the most played fixture in England’s top division – but the hosts looked unsettled by the late withdrawal of James Rodriguez in the opening stages after the Colombian sustained a calf injury in the warm-up.

Villa arrived on Merseyside having opened the scoring in each of their previous three Premier League games – failing to win any of them – but the manner in which Everton fell behind on Saturday was entirely self-inflicted.

Holgate looked to play out from the back, but his poor control was pounced upon by Watkins, who showed good strength and composure to steal possession and tuck his shot between the legs of Jordan Pickford.

In front of the watching England manager Gareth Southgate, Watkins came close to adding to Villa’s lead when he raced onto an Ezri Konsa long ball, brushing off Holgate again, but his shot from the angle was smothered by Pickford.

It would prove a costly miss as moments later, Everton were level. Calvert-Lewin escaped Ross Barkley at the far post to power his header from Digne’s corner over the line despite Tyrone Mings’ best efforts to keep it out.

Four minutes later, Calvert-Lewin must have thought he had completed the turnaround when his diving header from Digne’s superb volleyed cross was parried out by Emiliano Martinez from close range.

Villa would carve out the better chances during the remainder of the opening period, however, with Pickford producing a double save to deny Bertrand Traore. Watkins then renewed his battle with the Everton goalkeeper as he met Matty Cash’s cross before El Ghazi clipped the crossbar on the rebound.

Smith’s side were not done there in a frantic half as Barkley, on his return to Goodison, collected Traore’s pass and struck the base of the post with Pickford beaten.

Everton had ridden their luck, but they emerged the brighter side following the restart as Alex Iwobi and Allan were wayward with right-footed efforts in quick succession before Richarlison raced onto Pickford’s long ball but dragged his shot a yard wide of the post.

Villa were struggling with the long ball, as Everton’s route one approach very nearly proved effective once again as Mings’ misjudged header landed at the feet of Richarlison once more, but his low drive was well-handled by Martinez.

The visitors absorbed their opponents’ best efforts, and with the game appearing to be drifting towards a stalemate during a relatively uneventful second period, Villa struck once more with 10 minutes remaining. With their first shot on target since the interval, El Ghazi collected Traore’s pass and curled his effort beyond the diving Pickford.

What the managers said

Aston Villa boss Dean Smith: “It was a good win. It was a really good game of football and both teams tried to win. I think we deserved it on the balance of chances. Jordan Pickford was in really good form and denied Ollie Watkins time and time again.

“It’s easy for people to say we haven’t got anything to play for but we want to finish as high as we can. We want to regain that momentum and consistency we had earlier in the season.

“He is better than he was as I had him at Brentford. He would go home and beat himself up but he gets over that a lot more now and learns. He is a really humble guy and is getting his rewards now.”

Man of the match – Ollie Watkins

It took a while for Watkins to rediscover his early-season form after Jack Grealish sustained his leg injury in February, but the Villa striker could have finished with another half-trick against Merseyside opponents after his treble in October against Liverpool.

Mason Holgate couldn’t cope with his movement in an opening period in which his error led to Watkins’ clinical opener. It was one of four attempts he had over the course of an energetic evening.

Watkins is a class act, improvising well for another chance at the far post, and with the watching Southgate known for picking players on form, Watkins is well placed to benefit from the extended 26-man squad for the Euros.

“It’s been a long time coming,” Watkins told BT Sport. “We haven’t been playing too well of late, so it was nice to get three points away from home.

“I think I could have done better with a few chances. I should be leaving the pitch with two or three goals, but the most important thing is we got the three points.

“I think any striker will say they can do a little better with the chances I had. I just have to keep working on it. No matter who’s watching, you just have to work hard and do your best.”

On his England hopes, Watkins added: “Any international game is magical. I’m just focusing on my club form now, trying to push us into the European spots. I think it’s a possibility. Games are coming thick and fast now. If we get a couple of wins it puts us right back up there.”

Aston Villa are at home to Manchester United on the same day, live on Sky Sports; kick-off 2.05pm.