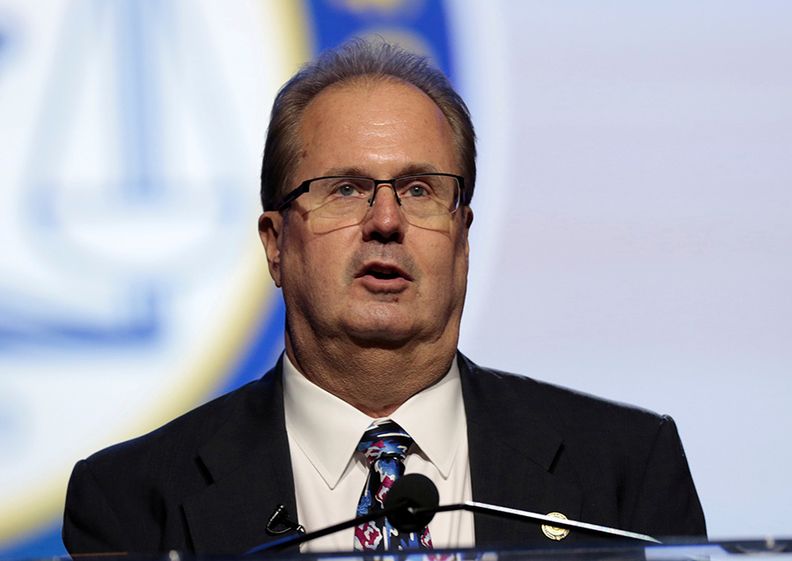 Gary Jones was sentenced in person before U.S. District Judge Paul Borman just over a year after he pleaded guilty.

DETROIT — Ex-UAW President Gary Jones was sentenced Thursday to 28 months in federal prison for stealing millions from auto workers to live a lavish lifestyle of golf, cigars and fine liquor.

Jones, 63, is the second consecutive union leader to be put behind bars, following his predecessor, Dennis Williams, who last month was sentenced to 21 months in prison.

Jones was sentenced in person before U.S. District Judge Paul Borman just over a year after he pleaded guilty. His hearing was delayed multiple times by the coronavirus pandemic.

“I let my family down, and I let my union down,” Jones said, choking up in court. “I pray every day that no harm comes to the UAW and they’re able to be stronger and organized because of it.”

Jones’ original sentencing guideline was 46 to 57 months. Prosecutors had called for a 28 month sentence and for him to pay back or forfeit a total of nearly $750,000 for what they labeled as “naked ambition” that enriched a few while hurting the members he swore to fight for. They asked for the reduced sentence, however, because Jones’ cooperation helped secure additional convictions, including Williams’.

“Gary Jones in many ways is a good man,” prosecutor David Gardey said Thursday, noting his “broken and contrite heart” that showed through in their discussions. “He was a good man who found himself in and worked in a culture of corruption, which was the leadership of the United Auto Workers union.”

The UAW, in a statement, said Jones’ sentencing “brings to a close a very dark chapter in UAW history.”

“Jones clearly put his personal and self-interest above that of the members of his Union and has been stripped of his membership in the UAW,” the statement said.

Prosecutors say Jones was involved in a multifaceted scheme to steal from members along with aide Edward “Nick” Robinson, former regional director Vance Pearson and others.

Among the abuses, prosecutors allege that Robinson supplied about $60,000 to Jones that included $15,000 improperly taken from the UAW Labor Employment Training Corp. From 2010 through 2017, Jones deposited a portion of the money he received from Robinson into one of his personal accounts, according to the charges against him.

In 2015, the feds allege, Jones ordered more than $13,000 worth of cigars from Gary’s Sales in Arizona “in large part” for the use of UAW Official B, whom The Detroit News identified as Williams.

Jones, a certified public accountant who lives in O’Fallon, Mo., near St. Louis, became a UAW member when he was hired at a now-shuttered Ford glass plant in Broken Arrow, Okla., in 1975. He joined the UAW International staff in 1990 and was assigned to the union’s accounting department. He later became its chief accountant.

Jones was chosen as director of UAW Region 5, headquartered in Hazelwood, Mo., also near St. Louis, during a special election in October 2012. He was reelected to that position in June 2014.

He was anointed president of the union in 2018 but resigned abruptly in November 2019 — amid contract negotiations with the Detroit 3 — as the scandal closed in around him.

Jones rarely spoke to the media, and he receded further into the shadows as the federal probe intensified, marching out a spokesman or union vice president for big ticket events that usually included an appearance or remarks from the president.