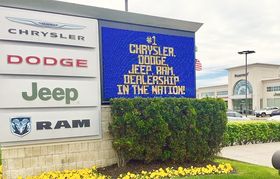 Parkway promoted itself as FCA’s highest-volume dealership in the U.S.

She had just graduated from temporary status to full time at a Fiat Chrysler Automobiles axle plant in Michigan when she learned that her employee number had been used to get someone a family discount on a new vehicle without her permission.

She found out by checking an online portal for workers that showed her number was used on a deal at Parkway Chrysler-Dodge-Jeep-Ram in Clinton Township, Mich. To this day, she doesn’t know how.

“It feels like you’re violated, like someone got into your personal stuff,” Naylor, whose father was an auto dealer in Kentucky, told Automotive News. “It feels very corrupt.”

Naylor called the store and FCA to alert them of her discovery. She doesn’t know which salesperson had her information, but it turned out she wasn’t the only one to complain about someone at Parkway misusing employee discounts.

Federal prosecutors say Apollon Nimo, one of FCA’s top salespeople nationwide, had been selling employee discounts to customers for years in a scheme that bilked the automaker out of $8.7 million. That figure includes $700,000 in rewards FCA paid Nimo for the huge number of sales he was making, in addition to his compensation from the dealership.

Nimo, 34, was arrested April 30 on conspiracy and wire fraud charges, then released on bond. A preliminary exam is set for May 21.

In the majority of transactions that prosecutors allege were fraudulent, buyers claimed to be the brother-in-law or sister-in-law of an FCA employee to get a 5 percent discount. The employee-purchase control numbers used in the deals were often bought and sold through private Facebook groups.

Authorities started looking into Nimo after FCA employees began complaining that their personal discount codes had been used without their consent, often at Parkway. In 2019, FCA gave investigators a list of 268 employee numbers that were reported as having been used without authorization. All of them were linked to sales made by Nimo from Feb. 21, 2016, to June 18, 2018.

Prosecutors say Nimo sold 250 vehicles in a single month last year — more than most FCA dealerships’ entire sales teams, a manager at a nearby competitor told investigators — and was continuing to falsify employee discounts until the time of his arrest.

Parkway’s general manager, Michael Riley, didn’t respond to requests for comment from Automotive News. The dealership has removed Nimo’s name and photo from the staff listing on its website. Stellantis, the company FCA merged into this year, has declined to comment beyond a statement noting that dealerships are independent businesses and saying it is “committed to preserving the integrity of our employee purchase programs and is cooperating with the U.S. attorney’s office.”

Parkway promoted itself numerous times on Facebook from 2016 through 2020 as FCA’s highest-volume dealership in the country.

Some workers got hit repeatedly with fraudulent deals.

One Michigan employee, who asked to not be identified, said her number was used at a Detroit-area store five times from 2018 through 2020. She gave it out once for a legitimate deal at that dealership, then noticed later that more transactions popped up on her employee dashboard.

She called one of the customers who made a purchase with her discount. The man, who was listed in the deal as being her brother-in-law, told her he didn’t know a stranger’s personal information was used, saying that the salesperson had just informed him that he could get a discount.

“I don’t have a brother-in-law,” said the worker, who had a passcode added to her account to protect it after consulting with the automaker.

Naylor said she never bought a vehicle from Parkway or gave the store her employee number. Her husband once took their Dodge Durango to Parkway for airbag recall work, so she wonders if her information was retrieved somehow then. Or maybe using Ram’s website to configure a truck, which led to numerous follow-up calls from Parkway, played a role.

Looking back, Naylor still remembers feeling anxious after seeing that someone she didn’t know had gotten a family discount with her information. The online dashboard, she said, listed who bought the vehicle and the name of the dealership.

Naylor looked up her employee account after seeing a Facebook post about a worker at another FCA plant whose employee number had been stolen and used at Parkway. She didn’t believe it at first, only to discover the same thing had happened to her.

Having just graduated from temp status, she was concerned after remembering that FCA had sent a letter to workers saying they were responsible for the use of their numbers. Potential penalties for misuse include termination.

“I definitely did not sell mine, so something is really weird,” Naylor said.

When Ken Thomas heard about the Nimo case, he brought his staff together for a team meeting.

Thomas, operating partner at Northland Chrysler-Dodge-Jeep-Ram in Oak Park, Mich., told his employees that he wouldn’t tolerate such behavior.

Thomas said the automaker has a new system in place that requires workers to list eligible family members on their employee portals during an open- enrollment period that begins in January. After that, the automaker will make only one exception for the rest of the year. So if somebody forgets to add a son-in-law, for instance, Thomas said that person can be added, but no more.

Workers are allowed to give out six employee discounts to immediate family members per year. Dealerships are reimbursed for the 5 percent discounts.

Said Thomas: “It weakens the entire dealer body when you have anyone that’s cheating.”