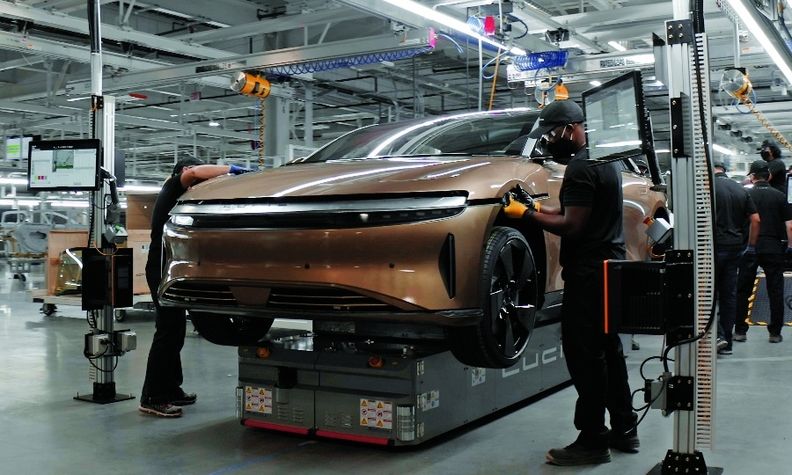 Lucid employees work on the company’s first vehicle — the electric Air sedan, which is set to begin production in 2022.

When Lucid Motors broke ground on its first assembly plant in North America at the end of 2019, the upstart electric automaker was frugal with the limited cash it had.

That year, Lucid had received a $1 billion-plus investment from the Public Investment Fund of Saudi Arabia. But those funds would need to cover not just building the first phase of its Arizona plant and launch of production, but also the final engineering and testing of its product — the luxury Lucid Air sedan — as well as the rollout of its retail strategy.

Building the Casa Grande, Ariz., factory alone could have easily eaten up $1 billion or more, given that Lucid is vertically integrated from powertrain manufacturing to final assembly, company executives said. Instead, the first phase that was completed in December cost only about $700 million.

Lucid’s frugal approach was to build only the pieces of the factory it needed to reach 34,000 units of annual capacity for the first phase — and to minimize construction costs by building it quickly over the course of a year.

“Everyone’s familiar with just-in-time logistics,” Rawlinson said. “I’ve got a just-in-time factory because I didn’t want my capital expenditure lying around for a year or two” before the car was ready for production.

Lucid’s factory team decided early on that it would hold off on constructing a general assembly building until phase two and focus instead on a more creative approach to constructing its paint shop.

Peter Hochholdinger, Lucid’s vice president of global manufacturing, said the paint shop would be built to accommodate future needs, with a two-floor structure with controlled temperature and airflow.

But because Lucid only needed limited painting capacity to start, it designated the second floor for paint and outfitted the first floor as its general assembly shop.

“We saved a lot of money on that,” Hochholdinger said. “We made the footprint of the paint shop for the final stage of production, but with only the equipment that we needed for phase one.”

Before joining the startup, Hochholdinger was vice president of production at Tesla’s plant in Fremont, Calif. He also previously worked for Audi in Germany.

As Lucid grows, it will avoid the headache and expense of building a second paint shop, he explained.

“You have to think about your footprint very wisely,” he said, and “what you want to do in the next 10 years.”

Hochholdinger said that Lucid has been able to build a custom plant on undeveloped land for less than the cost of refurbishing and modernizing an abandoned factory.

“With the greenfield, you can dial in your processes very well,” he said. “You can build your factory exactly to the shape, the size, to all the things you need. And you can also build it very cost efficiently.”

Lucid has grander plans ahead. The Arizona plant is designed for four phases.

But now, thanks to the venture’s planned merger with publicly traded Churchill Capital Corp. IV — announced in February — Lucid expects to secure about $4.4 billion in cash. That will allow it to build out the second phase of production, adding a crossover and moving to capacity of 90,000 vehicles by 2023.