For sure, Arjun Kapoor loves the ‘beach’ and these PICS are proof! The handsome hunk Arjun Kapoor never fails to impress us whenever he posts something on social media. The actor is an avid social media user, and is very popular on Instagram for his lifestyle and stunning clicks.

The ‘Aurangzeb’ fame star enjoys a massive fanbase of 11.3 million followers on the photo-sharing app. The actor always gives a sneak peek into his daily life-from sharing glimpses of his photoshoots to the announcement of his projects, from random selfies to throwback memories and of-course the snaps of his pet, Arjun keeps his fan army entertained with the colourful and vibrant posts.

Arjun has come a long way in his career and has proved his mettle time and again in the industry. He has also established himself as a bankable star at the box office. Needless to say, the actor enjoys a massive fan following across the world.

He is one of those stars in Bollywood who can slay any style like a pro. Be it rocking a casual athleisure or a red carpet look, Arjun always manages to set the tone right for everyone and makes heads turn. Often, the actor gives fans style inspiration via his social media handle as he drops his photos on the same.

Speaking of this, the ‘Panipat’ actor has again managed to leave all his fans stunned with his photos. Arjun took to his Instagram handle today and shared some alluring sun-kissed pictures, wherein he can be seen flaunting his million-dollar smile.

The ’Gunday’ actor is posing on the seashore, wearing a white shirt and black denims. He completed the look with slippers and a cool pair of sunglasses. Needless to say the star is looking absolutely dapper in the photographs. He captioned the post as, “Do I love the beach? Fo shore!”

Arjun also took to his Instagram story and dropped the same pictures, but captioned them differently. He wrote, “Look ahead..look beyond..look at yourself..look for yourself”, “actually f**k what I said..just look within yourself”. 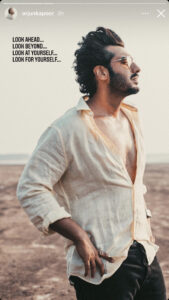 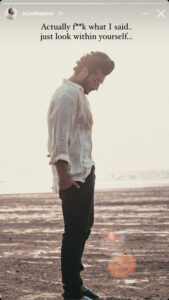 Arjun’s latest film ‘Sandeep Aur Pinky Faraar’ opposite Parineeti Chopra, has been released in the theatres recently. On the work front, he will be seen in ‘Bhoot Police’ which also stars Saif Ali Khan, Yami Gautam and Jacqueline Fernandez in the lead roles. Directed by Pavan Kirpalani, the flick is being produced by Ramesh Taurani and Akshai Puri.

He will also be seen in Kaashvie Nair’s untitled border romance opposite Rakul Preet Singh, and will play the second villain alongside John Abraham in Mohit Suri’s ‘Ek Villain Returns’.