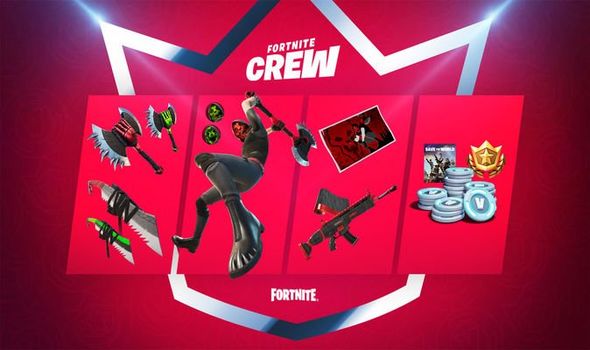 Epic’s next big subscription launch has been locked in for this week, following the launch of Fortnite Season 6.

This week will see the release of Fortnite Crew Pack for May 2021, bringing an exclusive skin to subscribers on PS4, Nintendo Switch, Xbox, PC, Mobile and next-gen consoles.

For those who haven’t checked it out yet, Fortnite Crew is a monthly subscription service that puts together a combination of cosmetic rewards, including the Battle Pass.

Battle Pass Included for the full Season – As a member of the Fortnite Crew, you’ll always have access to the current season’s Battle Pass.

A message from Epic Games adds: “Monthly Crew Packs always contain a new Outfit along with at least one accessory. All items are exclusive to Fortnite Crew members.

“Your Subscription is associated with the platform on which you purchased it (your “Primary Platform”) until it is cancelled and is not transferable.

“Be sure to choose the platform (e.g., Xbox, PlayStation, Switch) you purchase your Subscription on carefully.

WHAT TIME DOES THE NEW FORTNITE CREW PACK START?

Epic Games has confirmed that access to the new Fortnite May Pack will begin on Friday, April 30, at 8pm ET.

For gamers in the UK, the Fortnite Crew May Pack will be available at 1am BST on May 1.

The exclusive skin for the Fortnite May Crew Pack has been confirmed as Deimos, a new character available in both Battle Royale and Save the World.

And as confirmed by Epic Games, Fortnite Crew members will also get permanent access to Save the World.

The Crew Pack comes with its usual V-Bucks rewards, as well as a number of cosmetic items connected to Deimos.

A message from Epic Games adds: “May 2021’s Crew Pack features the skeletal soul-snatcher Deimos, not only a new Outfit in Battle Royale but also a new Ninja-class Hero in Save the World.

“Don’t own the latter? No worries: May’s Fortnite Crew benefits include full, permanent access to the Save the World PvE mode! Active Fortnite Crew subscribers will receive the Pack plus Save the World (if they don’t already own it) starting at approximately 8 PM ET on April 30.

“Alongside the Deimos Outfit, May’s Crew Pack comes with all others items from the upcoming Neo Underworld Set: the Sorrow’s Edge Back Bling (a blade from a fallen traveller), the fate-grasping Sorrow’s Reach Pickaxe, the soul-comprised Doomed Echo Wrap, and the Deimos Skull Stalker Loading Screen.

“When it comes to alternate Styles, the Deimos Outfit, Sorrow’s Edge Back Bling, and Sorrow’s Reach Pickaxe come in both black-and-red and black-and-green. These items also have a ghastly black-and-green Style in addition to the normal one.”

Previous articleSteve Clarke: Scotland boss says Euro 2020 squad expansion has given him ‘a lot
Next articleBiden Urges US Police Reform By Anniversary Of George Floyd Murder