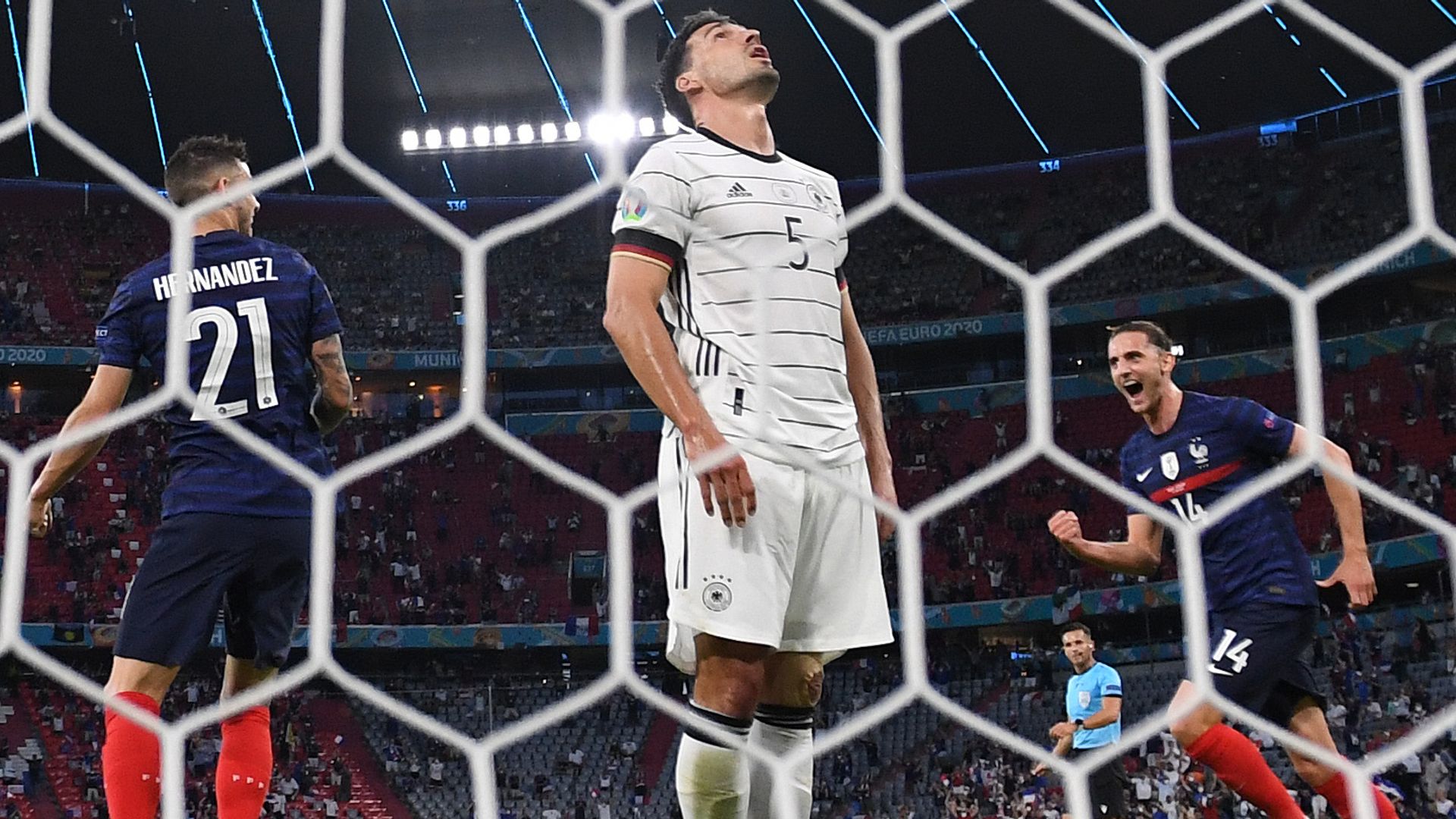 A calamitous own goal from Mats Hummels gave world champions France a 1-0 victory over Germany in their Euro 2020 opener at the Allianz Arena.

Hummels, recalled by Germany boss Joachim Low for the tournament following a two-year absence, sliced Lucas Hernandez’s cross into his own net (20) to give favourites France, runners-up at the last Euros, a winning start in Group F.

The eagerly-anticipated encounter proved an absorbing affair, although a little cagier than many were expecting, with clear scoring opportunities at a premium after the own goal.

Serge Gnabry went closest for Germany, sending a looping volley narrowly over the bar from a Robin Gosens cross, while France, their ranks bolstered by the return of Karim Benzema, who started up front, struck the post through midfielder Adrien Rabiot.

Didier Deschamps’ side also saw two goals ruled out for offside in the second half; a superb curling finish from Kylian Mbappe and a close-range strike from Benzema following a counter-attack.

Ultimately, though, Hummels’ own goal proved sufficient for France, whose accomplished performance, featuring fine individual displays from Paul Pogba and N’Golo Kante, offered a reminder of why they are so heavily fancied to go the distance.

The victory places them level on points with Portugal in Group F following the holders’ 3-0 victory over Hungary earlier on Monday and leaves Germany with work to do in their remaining games to secure a place in the knockout stages.

Man of the match: Paul Pogba

Germany, whose manager Low will be replaced by Hansi Flick after the tournament, started the game on the front foot as they sought to capitalise on their home advantage but it did not take long for France to move into the ascendency.

In fact, they should have already been in front by the time the opener arrived, with Pogba heading Antoine Griezmann’s corner wastefully over the bar from six yards out.

Moments later, Mbappe forced a diving save from Manuel Neuer having cut inside from France’s left flank, where he was up against Joshua Kimmich, who walked a disciplinary tight rope all evening having been booked just seven minutes into the game.

France’s opener arrived just a few minutes after those chances, with Pogba’s exquisite diagonal pass opening the hosts up and allowing Hernandez to provide the decisive cross.

Hummels had his head in his hands as he watched his sliced clearance fly past Neuer but Thomas Muller, recalled by Low along with the defender, had a chance to equalise almost immediately as he flicked a Gosens cross a few yards wide.

The game did not truly catch light in the remainder of the first half, with both sides guilty of sloppiness in possession, but there was a good opening for Ilkay Gundogan.

The midfielder, potent in front of goal for Manchester City last season, looked well placed to equalise when Gnabry hooked a loose ball into his path inside the France box but he failed to make a proper connection and his effort bounced harmlessly wide.

Much of the half-time analysis focused on an incident involving Antonio Rudiger and Pogba, with replays showing the Chelsea defender appearing to bite the Manchester United midfielder on the shoulder.

The incident was missed by the officials, perhaps fortunately for Germany, and the hosts were breathing another sigh of relief soon after half-time when Rabiot struck the outside of the post having elected to shoot rather than set up the unmarked Griezmann.

It seemed the game was opening up when Gnabry’s opportunity from Gosens’ cross arrived just a couple of minutes after that, but it soon became tight again.

1 – Germany have lost their first game in a EUROs tournament for the first time, having won seven and drawn five of their previous 12 such matches. The only side to win the EUROs after losing their opening game of a tournament was the Netherlands back in 1988. Uphill. #EURO2020 pic.twitter.com/IIzNZ7ogfK

Germany, who came into the tournament in poor form, struggled to create any further openings while France twice thought they had extended their lead – only for VAR to deny them.

The electrifyingly quick Mbappe was at the heart of both of those disallowed goals, first bending a low effort in off the post, then latching onto a through ball and squaring for Benzema to finish.

The 22-year-old’s pace caused major problems for Germany, who lined up with three at the back, and on a separate occasion he was only denied a one-on-one chance by a desperate, last-ditch Hummels challenge.

Hummels must have hoped that challenge, 12 minutes from time, would allow Germany to go on and plunder an equaliser, but instead they were left to reflect on their first defeat in a European Championship opening fixture.

For France, however, it is exactly the start they were hoping for.

Man of the match – Paul Pogba

All eyes were on Mbappe at the Allianz Arena, and the 22-year-old did not disappoint, but it was Pogba who produced the best individual performance.

The Manchester United midfielder was guilty of wasting a good chance to open the scoring from a Griezmann corner in the early stages, but from then on he excelled.

The highlight of his display was the brilliant, outside-of-the-foot pass to release Hernandez in the build-up to the winning goal, but there was a similarly impressive one to set up Mbappe for the first of the two goals France had ruled out for offside in the second half.

Pogba was France’s most influential player in possession – nobody had more touches – and he also impressed defensively alongside Kante, making more ball recoveries than anyone else on the pitch.

What the managers said

France manager Didier Deschamps: “We played a great game against a very good opponent. I knew my players would be ready and we were up for the fight.

“We weren’t far away from scoring the second goal that would have made us safe, but we didn’t suffer that much in the second half. It was a strong match with quality and talent.”

Germany’s Joachim Lowe: “It was a really intense match and we fought until the very end. I cannot blame my team for not trying – they gave everything they had.

“There were spells of the match when we were able to increase the pressure on them, but we didn’t create any clear-cut chances.”

France play again on Saturday when they travel to Budapest to face Hungary in Group F; kick-off 2pm. Meanwhile, Germany take on Portugal, also on Saturday in Munich; kick-off 5pm.