Maria Sakkari plans to trust her own game and “enjoy the moment” when she takes on defending champion Iga Swiatek in the French Open quarter-finals later on Court Philippe-Chatrier.

On Monday, the Greek player’s 6-1 6-3 demolition of last year’s runner-up Sofia Kenin secured her place in the last eight and prior to that, she had dismissed the 14th seed, Elise Mertens, in the third round.

Sakkari’s progression into the last-eight club at a Grand Slam has been a fairly long time coming. This year’s French Open is her 21st appearance in a main draw of a Slam and her previous best was reaching the fourth round at last year’s Australian Open and US Open.

This time around, instead of exiting the competition, the 25-year-old took just 68 minutes to beat Kenin.

She forced the fourth seed into making 32 unforced errors, nine double faults and Kenin won just 30 per cent of points on her second serve.

In contrast, Sakkari remained solid behind her own first serve and she won six of the 10 break points that she created.

“I’m excited to be in the quarter-finals for the first time. I knew it was going to come,” she said after her fourth-round win.

“I didn’t know when, but I think that I’ve been playing very good tennis, especially this year, and I don’t see why I can’t go further, as well.”

Maria Sakkari is the first Greek woman to make a major quarter-final in the Open Era.

One of the key components Sakkari has attributed her continued development to, is the presence of her coach Tom Hill.

Hill himself went to the Nick Bollettieri tennis academy, played Division 1 college tennis, as well as both Futures and Challengers events.

Previously, the British player-turned-coach, worked with Danielle Collins and during the six months he spent with the American, she moved from 162 to 39 in the world.

“Having Tom by my side, he has helped me a lot. I can see the difference between me as a player before starting with Tom, and myself now with Tom,” she said.

“We have a very good chemistry. He’s a guy that really understands and really supports me in every decision I make. He was made to become a top-level coach. I’m very lucky to have him by my side.”

At just a year older than Sakkari, Hill clearly brings a great dynamic to the Greek player’s professional career and also has the courage of his convictions to adopt a player-first approach.

After a second-round exit in Rome, Sakkari took the decision to step away from the court and Hill trusted that a period off was exactly what she needed.

The fact that she can come back from six or seven weeks off at the end of the season, and strike the ball cleanly again within two days, boosted Hill’s belief that Sakkari would still be ready for the French Open.

She went to the Greek island of Spetses for eight days and during that time decided that she needed to be slightly kinder to herself.

“I think it’s a common thing that tennis players do actually [beating yourself up], because we are playing week after week, so sometimes we do get disappointed.

“Sometimes we do get impatient. I caught myself being impatient and disappointed a lot of times throughout my career,” she reflected.

“Working with the right people, enjoying my tennis, and as I said, not torturing myself and rewarding myself instead [is important]. After having a few days off, I thought about it, and I just found a way to do it.” 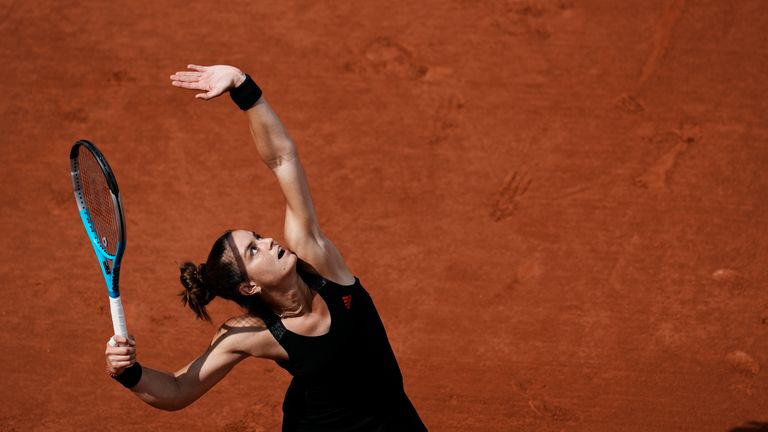 Maria is growing in confidence, her serve has improved a lot and obviously physically, she’s amazing. I’m really liking the way that she’s playing. We’re just taking it step by step and I believe that she can improve a lot more.

“With Maria and I, because we’re a similar age we can relate to lots of different problems, both on the court and off the court,” Hill said about their partnership.

“As a coach on the tour, I’m with her almost every day of the year, so just having someone that she can talk to about boyfriends, family or anything [is needed] because what’s she’s going through, I’m also going through.

“I also feel like I’m pretty fresh out of the game. We have Giannis Stergiou our hitting partner, but I can still hit with Maria. Also, I still can relate to the feelings she’s having because I can still remember how it was, I definitely think that’s a strong factor.

“When it comes to tactics and strategies, that something that I obsess over. I woke up at 2am the other night panicking about where Maria should stand on the return position against Kenin, so I’m watching videos at 3am trying to figure it out!”

When Sakkari steps onto Court Philippe Chatrier later, she will need to take with her, her more relaxed mental approach and the tactics she has developed with Hill.

Awaiting her is the defending champion, and a player who has yet to drop a set in singles at this year’s tournament. As was the case in 2020, Swiatek is looking incredibly comfortable at Roland Garros.

“She’s the defending champion for a reason,” Sakkari noted. “For sure, she likes the court and the conditions. She’s an unbelievable player.

“Iga’s already won a Slam. But you know, I’ve been told that many times that no one is easy when you get to this point. If it’s the No 1 in the world, someone ranked 10, 50 or whatever, they are playing in the quarter-finals for a reason.

“No matter who I have on the opposite side, it’s going to be an extremely tough match,” she concluded. “So, I’m going to enjoy the moment and play my tennis.”

Previous articleAerospace Giant Boeing Seeks Renegotiation Of Air Force One Contract
Next articlesuspension in Okay, but let’s not be hard on Robinson if he doesn’t repeat it offensive Behavior: Hold