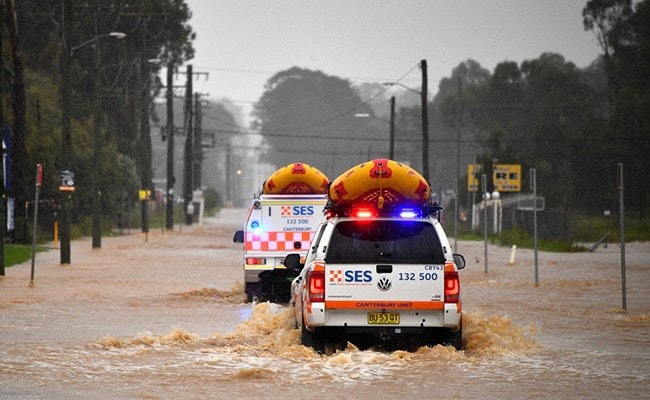 Emergency service officials said 18,000 had so far been subject to evacuation orders across state (File)

Australia’s south east was lashed by another round of intense rainfall Monday, worsening “one in 100 year” flooding north of Sydney, as thousands of people were ordered to evacuate and more than 200 schools closed.

A days-long deluge has caused widespread flooding in coastal areas of the country’s most populous state, New South Wales, with parts of Sydney’s north-west fringes now experiencing what officials have said were likely to be the biggest floods in decades.

It comes just a year after unprecedented climate-change bushfires burned across the same region, which followed a prolonged drought that had also seen Sydney introduce water restrictions.

The state’s Mid North Coast has been particularly badly affected, with state Premier Gladys Berejiklian declaring the region had been struck by a “one in 100 year” disaster.

In Sydney’s vast Hawkesbury-Nepean Valley, swollen rivers were expected to peak at levels not seen since 1961, after the Warragamba Dam, which provides the bulk of Sydney’s drinking water, spilled over Saturday afternoon.

Authorities have warned of a potentially “life-threatening” situation though so far there have been no reports of deaths or serious injuries.

The State Emergency Service has received 8,700 calls for help since the crisis began — more than 2,000 of them in the past 24 hours — officials told Sky News Australia.

Education authorities said more than 200 schools were closed, including some that had been damaged in the floods.

The Bureau of Meteorology has warned of “treacherous” conditions Monday before the wild weather eases later in the week.

Rainfall records were forecast to continue tumbling in the coming days as the deluge spreads into the state’s northwest, and further north into Queensland state.

Health officials have said the rain and floods will delay the already halting roll-out of coronavirus vaccines in Sydney and surrounding areas.

Australia is due to begin the first major public phase of vaccine distribution on Monday, although the programme has slipped behind the government’s announced timetable because of supply and delivery issues.

Lebanese driver: I have twice transported ammonium from the port to the Hezbollah stronghold