The Usos’ first match back on Friday Night SmackDown against King Corbin & Dolph Ziggler took several shocking turns, but none more so than the one that resulted in Roman Reigns & The Usos laid out cold in a heap by night’s end. 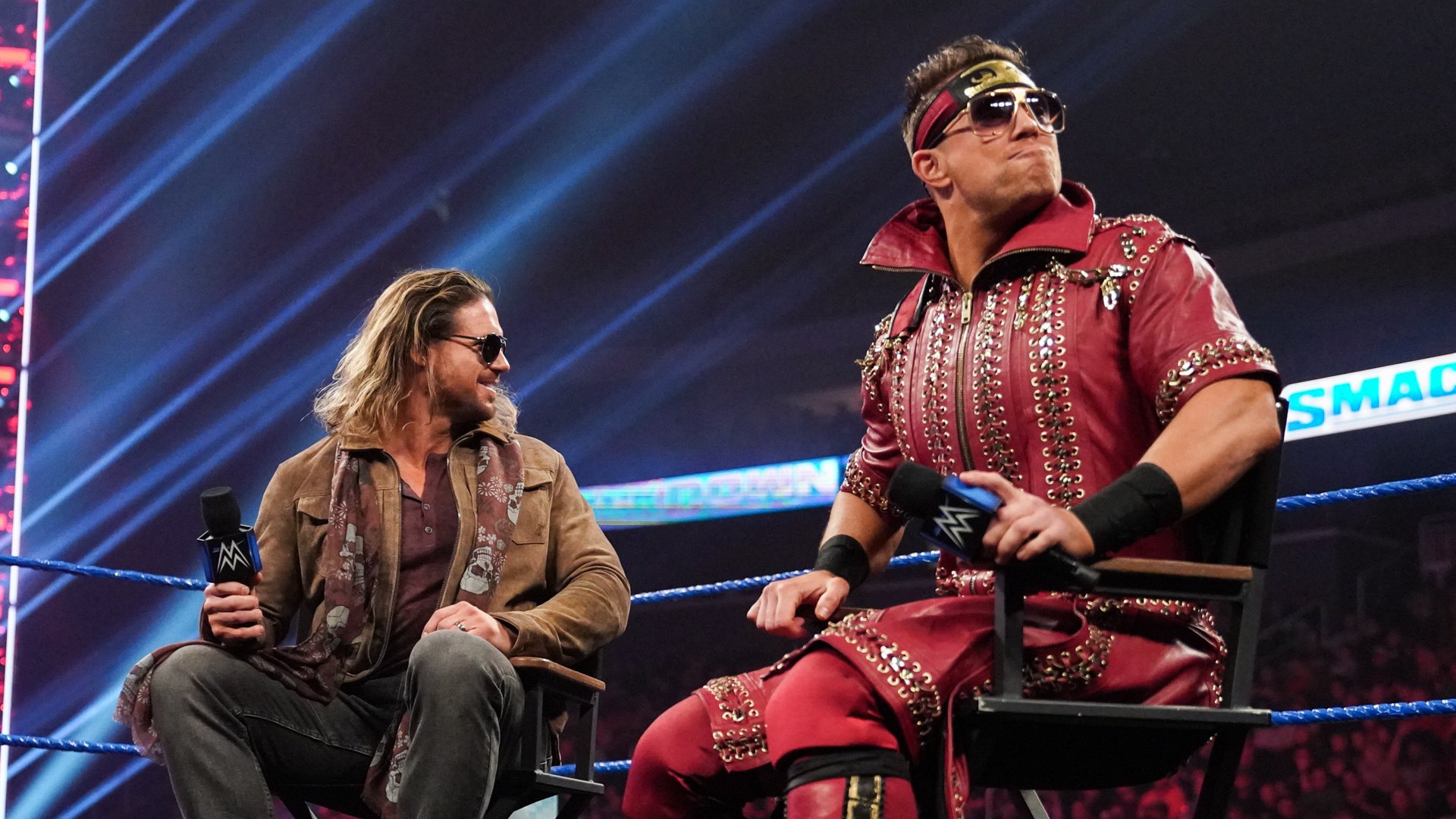 John Morrison shocked the WWE Universe when he came out of The Miz’s locker room after The A-Lister suffered a tough loss against Kofi Kingston last week.

Morrison appeared as Miz’s guest on a special “Miz TV” reuniting the former tag team champions. Miz explained his irrational actions last week against Kofi and then the returning Morrison arrived, and The A-Lister presented the WWE Universe a quick refresher course on Morrison with a sizzle reel of JoMo highlights.

Morrison explained that he returned to the blue brand sooner than he was planning just so he could support The Miz before revealing that he was disappointed in the WWE Universe for their treatment of Miz after his outburst last week. Morrison lambasted the WWE Universe before The New Day interjected and asked Miz who he was trying to fool with what they believed was a forced apology. Miz came right back at Kingston, mocking Kofi for the manner in which he lost his WWE Title and what he has done since. But Kofi retorted by suggesting that Miz was changing from “cool Miz” to “obnoxious Miz,” setting the tone for their imminent rematch. 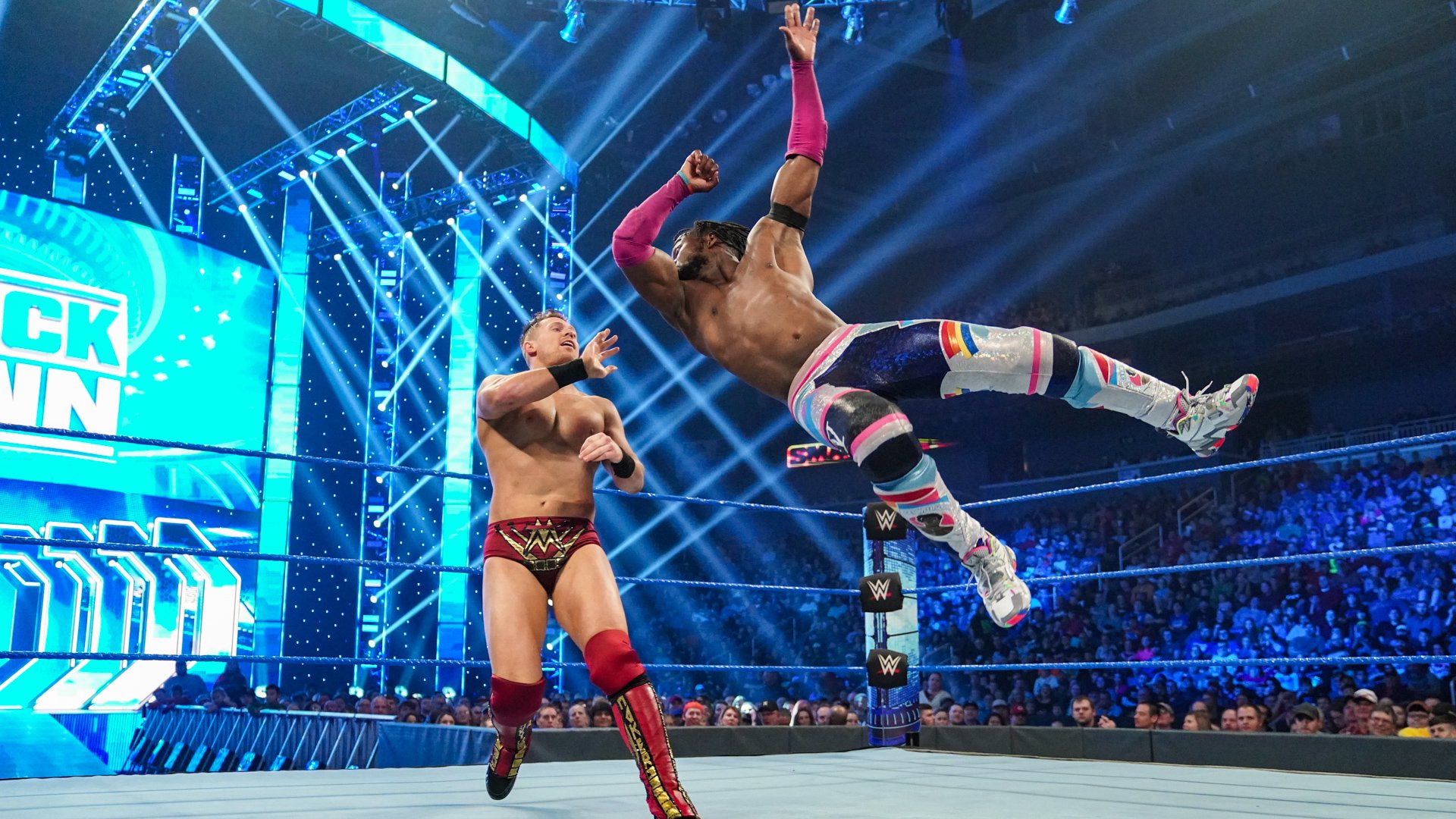 Fresh off their tense exchange on “Miz TV” moments prior and with both Big E and John Morrison providing guest commentary, Kofi Kingston and The Miz squared off in a rematch from last week’s Friday Night SmackDown.

The back-and-forth action in the ring between Kingston and Miz mirrored the back-and-forth dialogue between Morrison and Big E at the commentary desk. The A-Lister took the match to a different level when he intentionally shoved Kingston into Big E. Miz’s actions prompted Morrison and Big E out of their chairs, leading to a shouting match between Miz and Big E that ended when JoMo cannonballed from the steel steps to take out Big E. With Kingston distracted, Miz caught his opponent off-guard and connected with a Skull-Crushing Finale for the win.

John Morrison said he was back to help his friend. Mission accomplished tonight. 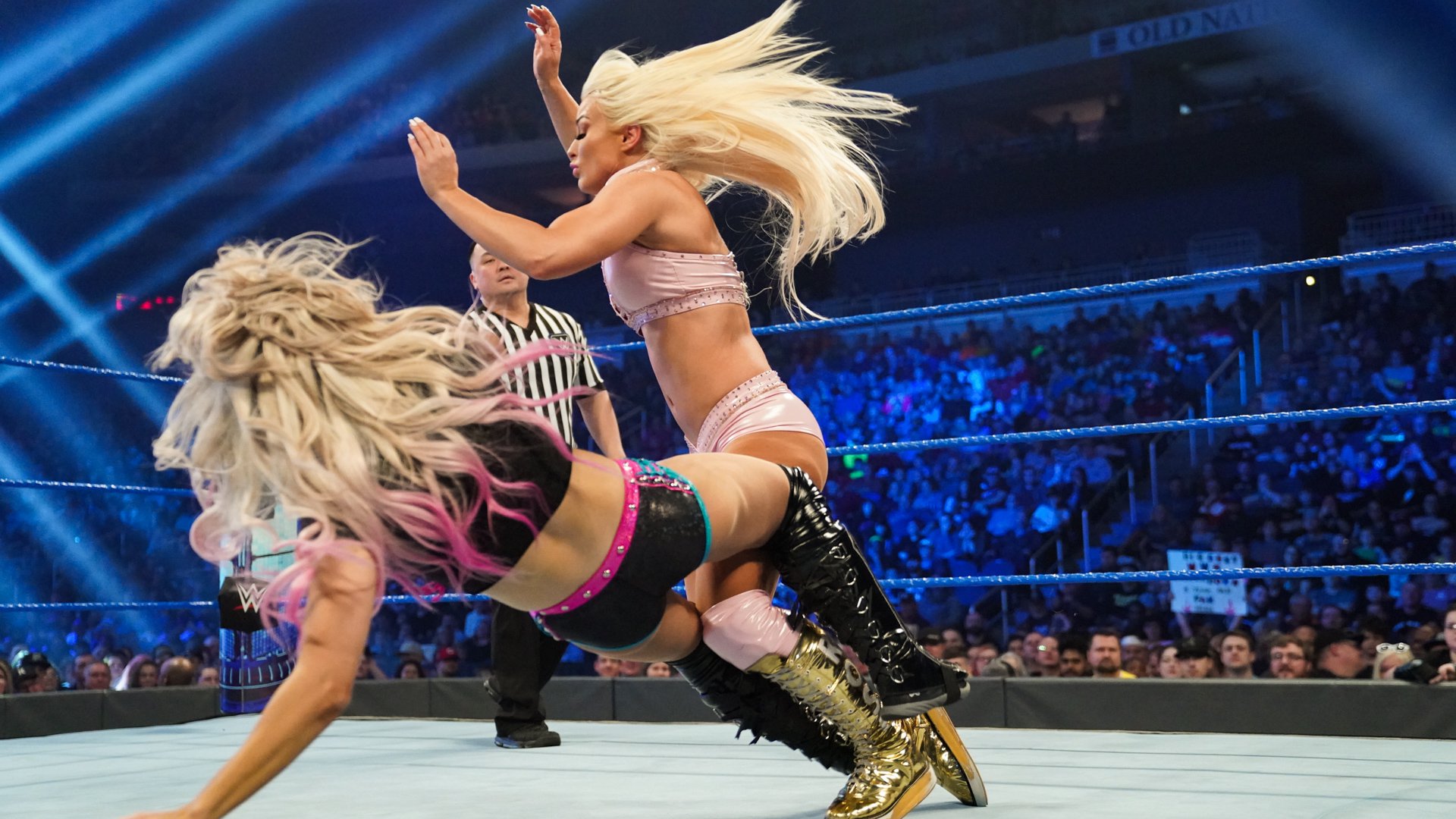 With Mandy Rose doing her best to make up for hurting Otis’ feelings after his mother’s fruit cake was destroyed, God’s Greatest Creation squared off against Alexa Bliss.

With every Superstar in WWE beginning to eye the Women’s Royal Rumble Match, the two went at with ferocity in pursuit of a monumental win, as both Nikki Cross and Sonya Deville watched from ringside. Each respective partner attempted to interfere, but the pivotal distraction proved to be Otis, who arrived with the cake that Mandy had gifted him earlier in the evening. This distracted The Goddess just enough for Mandy to roll up Bliss for a three-count as Otis enjoyed the heck out of his cake on the rampway.

Lacey Evans and Bayley got into a massive brawl 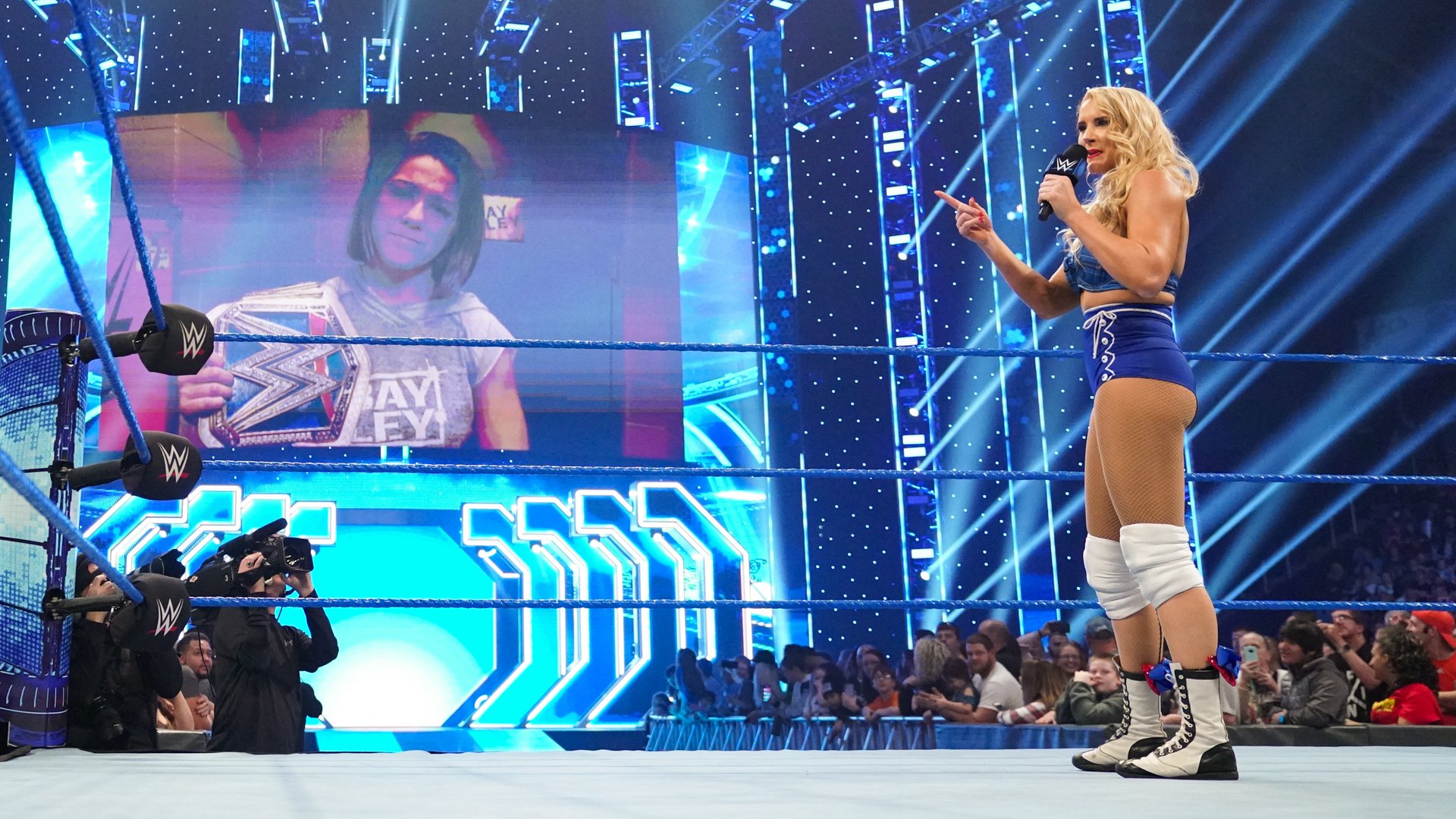 After weeks of personal animosity, Lacey Evans was finally supposed to take on Sasha Banks on Friday Night SmackDown… but Banks had other plans.

Instead, The Sassy Southern Belle got SmackDown Women’s Champion Bayley, on the TitanTron, informing Evans that Sasha was not here tonight. Bayley and Evans exchanged words before Bayley drove Lacey so over the edge that The Lady of WWE stormed backstage looking for her. Bayley tried to dupe Evans, attacking her from behind right as Evans approached Bayley’s locker room door. However, despite the blindside attack, Lacey battled back, taking the SmackDown Women’s Champion down and almost connecting with the Woman’s Right before a WWE official stepped in as Bayley scurried off. 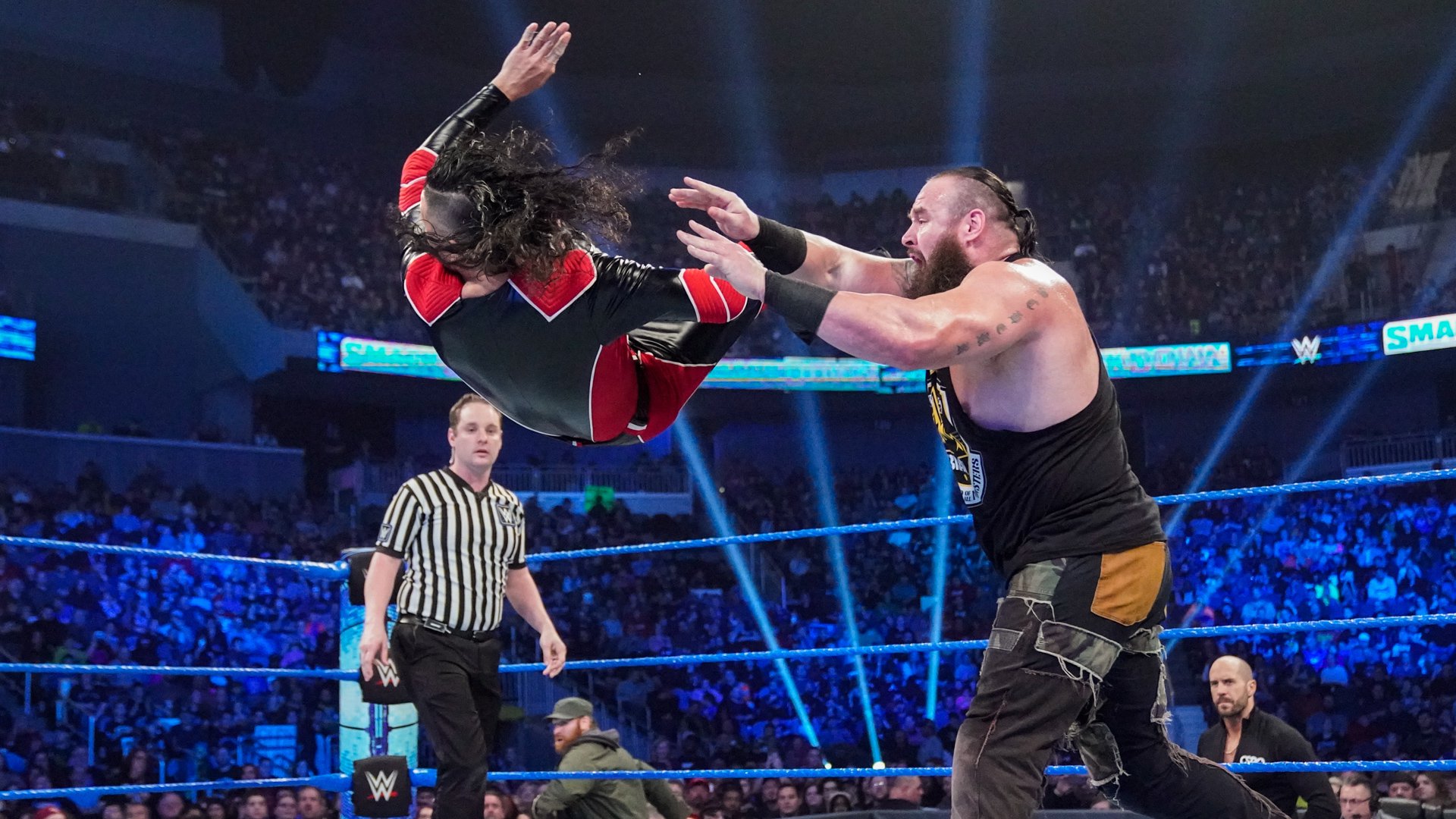 With Braun Strowman making it clear in recent weeks that he was eyeing Shinsuke Nakamura’s Intercontinental Title, The Monster Among Men had a prime opportunity to work toward a championship match by squaring off against Shinsuke in non-title action.

With Sami Zayn and Cesaro in Nakamura’s corner, The King of Strong Style found himself in a world of hurt at the hands of Strowman in the early goings. Zayn and Cesaro attempted to distract Braun throughout the contest, succeeding in the early goings by using the numbers advantage to down the massive Strowman. Braun battled back, however, and soon appeared to have Nakamura on the ropes. In the critical moments, Cesaro again attempted to interject, causing the referee to become distracted and allowing Zayn to slide the Intercontinental Title to Shinsuke.

WWE’s Rockstar wouldn’t get the chance to use it though, as Braun thwarted any plans, intercepting Nakamura’s attack and catching him with the Running Powerslam for the three-count. The Monster Among Men celebrated with the Intercontinental Title before Zayn quickly ran into the ring to snatch it from him, yet the overwhelming sensation still remained: Strowman was inching closer and closer to an Intercontinental Title opportunity. 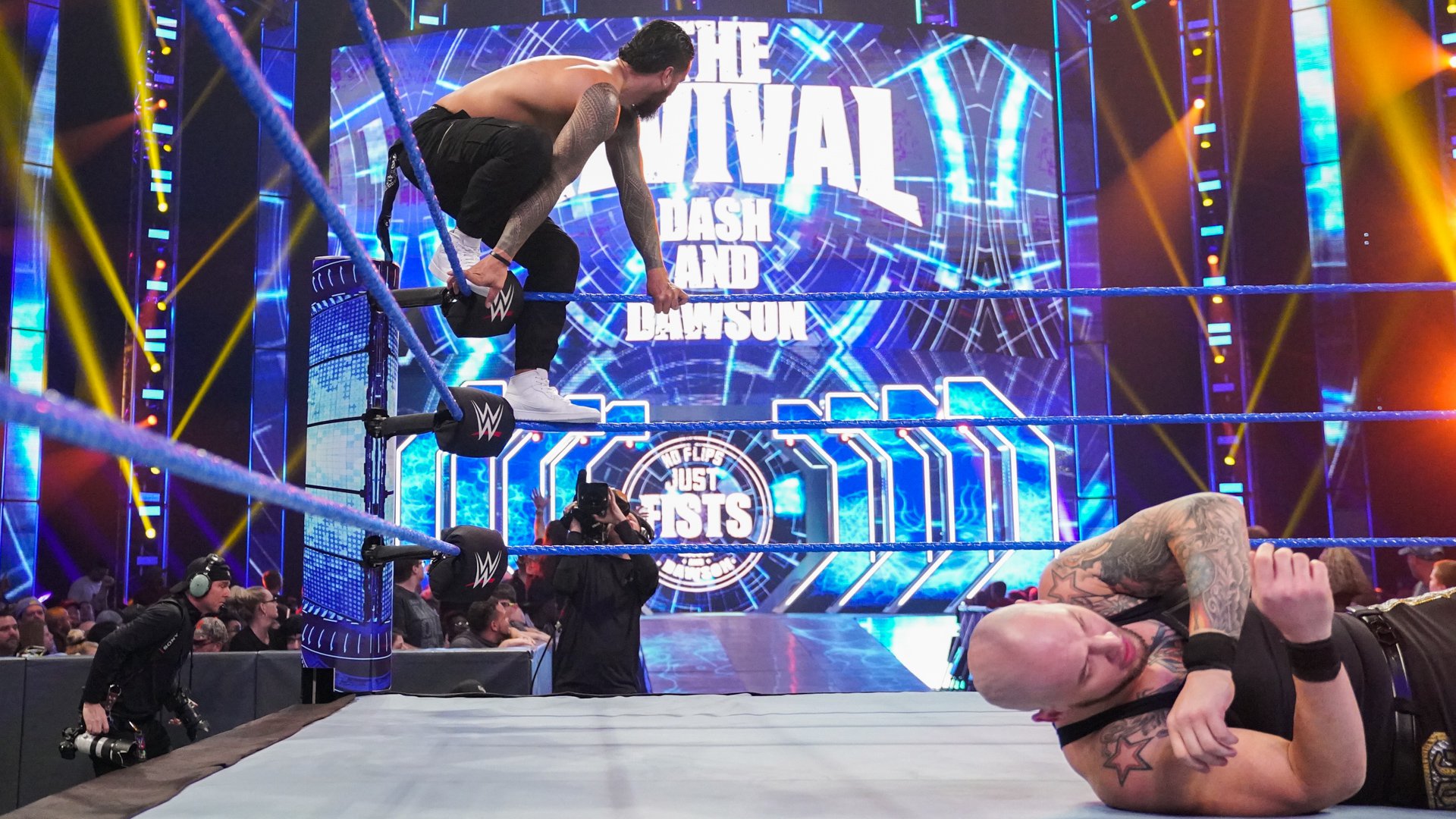 Following The Usos’ return to SmackDown last week to assist their cousin Roman Reigns, The Big Dog welcomed Jimmy & Jey back with open arms this week. The Usos could not contain their excitement to be back, making it clear that King Corbin and his kingdom had firmly disrespected Reigns, meaning, by association, they had disrespected them as well.

King Corbin and Dolph Ziggler interrupted, and after a heated back-and-forth, Roman and Corbin agreed to go one-on-one prior at the Royal Rumble event prior to the Royal Rumble Match. One more line of disrespect from Corbin was all The Usos could handle though, leading to them diving onto Corbin & Ziggler to get this tag team match kickstarted with a spark.

Jimmy & Jey showed no rust whatsoever, coming out of the gates strong against Corbin & Ziggler. However, The Revival soon arrived, causing a temporary distraction which allowed Corbin & Ziggler to take control, but The Big Dog swiftly hit the scene and laid out both members of The Revival with one Superman Punch before making his way to ringside.

After being taunted by the 2019 King of the Ring, Reigns Speared Corbin on the outside, prompting a disqualification. Reigns then appeared to be ready to powerbomb Corbin through the announce table, but Robert Roode made a shocking return, allowing Corbin, Ziggler and Roode to pulverize The Big Dog and The Usos on the outside. The night concluded with Roman buried under the announce table, The Usos out cold and King Corbin’s court once again standing tall.

The NFL will take an unexpected action to improve its appeal amongst children next season after apparently concurring...
Read more

Harry Styles Is Stuck In California Amid Coronavirus Pandemic

Harry Styles, like lots of other individuals around the world, is having a tough time surviving self-isolation amid the...
Read more

White House Predicts As Many As 240,000 U.S. Deaths From Coronavirus

Bucs’ Chris Godwin thinks Jameis Winston gets too much blame, which is both right and wrong

Oilers’ Dave Tippett: ‘I think we can get up and running pretty rapidly’

Guatemalan deported from US tests positive for COVID-19: Official

Guatemala City, Guatemala - A Guatemalan male who was deported from the...
Read more

Russell Wilson wants Seahawks throwback uniforms, and he might get his wish

Russell Wilson on Wednesday night revealed the rarity that is a nearly generally...
Read more

‘We might be just half method’: How coronavirus market mayhem compares to 2008 financial crisis– podcast

March 25, 20207:00 AM EDTLast UpdatedMarch 25, 20207:00 AM EDT Watching the stock market these days is like looking at a falling elevator.It’s going down, and quickly. For investors stuck at home glued to the news and impulsively checking their online portfolios, it’s hard not to panic. This week on Down to Business Financial Post…
Read more