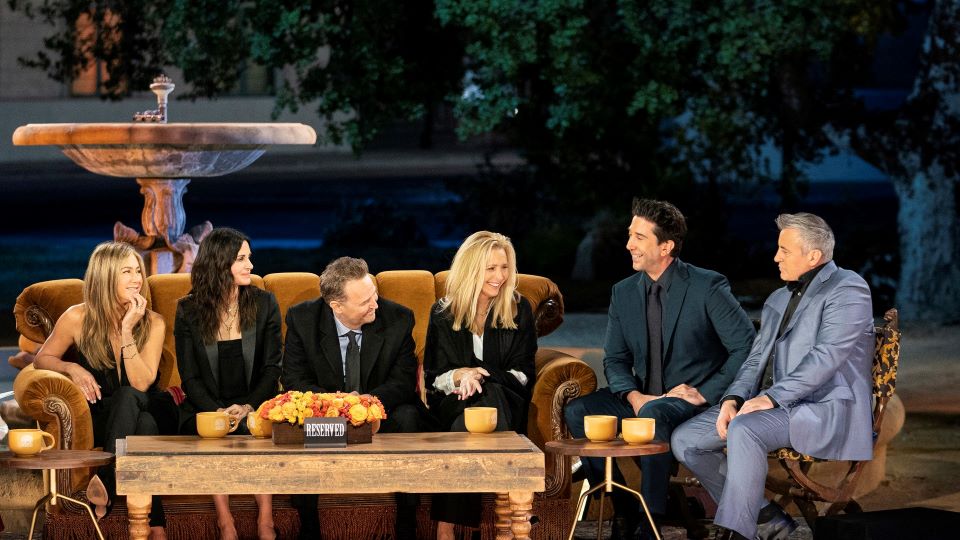 It’s the reunion that just keeps on giving! Some Friends: The Reunion deleted scenes were just released over on HBO Max. The clips are definitely worth watching after the special episode—especially if you want to get a glimpse at what the original Friends opening credits scene was supposed to be.

That’s right; the iconic fountain scene where Ross, Rachel, Monica, Phoebe, Joey and Chandler get soaked and dance around to “I’ll Be There For You” was, in fact, almost not there for viewers to enjoy. During a deleted clip released by HBO Max on Thursday, May 27, Friends producer Kevin S. Bright revealed that the title sequence went through “a few” iterations before the crew landed on the fountain.

At first, it was believed NBC didn’t want a title sequence in the first place, so the Friends team scrapped the initial version. “The first one was done at the pilot,” Bright said. “We basically sat them at the coffee shop and shot a bunch of footage of them playing cards, but then it was said, ‘Meh, there’s not gonna be a title sequence. NBC doesn’t want one, don’t waste your time.’”

But according to Friends co-creator David Crane, the network changed their minds when they saw the pilot. “We get back a note that the beginning of the show is too slow for them,” Crane recalled. “They want us to cut some of the dialogue from the beginning and we’re like, ‘No, no, no. This has always been in. This is how the show starts.’ We wanted that sort of slow, talking feeling. They’re like, ‘You don’t cut some of the dialogue and pace it up, you’re not on the air.’” Instead of cutting dialogue, however, it was decided that a title sequence could add some speed to the beginning of the show for NBC. Bright came up with a temporary opening credits clip that was later swapped out for the one fans of Friends know and love: the fountain scene, which was actually shot on the Warner Bros. lot in California.

Series co-creator Marta Kauffman revealed they shot the quick sequence for “about four hours until 2 o’clock in the morning” on a “very cold night.” She said, “the fountain was cold, and they were so game and so great about throwing themselves in there.” Now we can say with complete certainty that it was a good thing they did!

Friends Forever: The One About the Episodes

If you still can’t get enough of Friends, check out Friends Forever: The One About the Episodes, the only authorized guide with behind-the-scenes details for over 200 fan-favorite episodes. This 25th Anniversary edition is fully illustrated and includes tons of fun exclusives, like never-before-seen photos, interviews with show creators Marta Kauffman and David Crane, and interactives from the series itself. For example: You’ll finally see what’s on Joey’s fake resume vs. his real one and find out Chandler’s real job! Friends Forever: The One About the Episodes is available to purchase on Amazon or Bookshop.org.

Friends: The Reunion is available to stream on HBO Max.