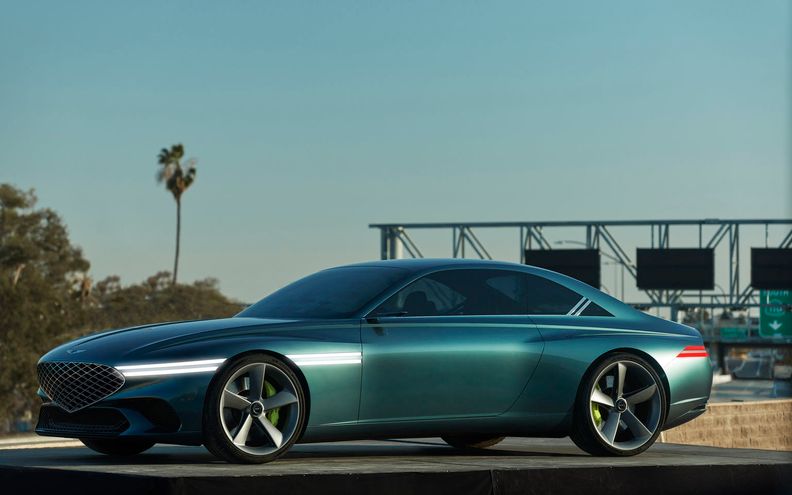 The X Concept is the luxury upstart’s fifth concept car and incorporates the “two lines” theme of Genesis’ current combustion-engine lineup, with parallel accent lines on exterior elements as well as the interior.

“The Genesis X Concept can be described as the ultimate vision of Athletic Elegance, the inherent design language of Genesis,” SangYup Lee, head of global design, said in a statement. “The signature Two Lines theme and sustainable luxury will be blueprints for the futuristic designs and state-of-the-art technologies that Genesis seeks to adopt in its future models.”

The interior “features a driver-oriented design with a cockpit that surrounds the driver with all operating systems and displays,” the company said.

“A weave-patterned fabric made out of leftover pieces of leather from previous manufacturing processes was used for the safety belts, parts of the steering wheel, and the airbag cover, highlighting the concept car’s eco-friendliness,” the company added.

Genesis is already developing its first EV, which is likely to be shown by the end of the year and go on sale in 2022. The compact electric crossover, which shares a dedicated electric platform with other Hyundai group vehicles, may be called the GV60, according to dealers.

Earlier on Tuesday, Kia presented new details on its production EV6 crossover, boasting that the GT version with dual motors should accelerate to 60 mph in just over three seconds. Kia, part of the Hyundai group, said the EV6 will go on sale later this year.