Piers Morgan is no stranger when it comes to airing his opinions and his latest social media posts are no different. In recent weeks, the former Good Morning Britain news anchor has used Twitter to slam England fans who have disagreed with the national team’s actions.

Get a life, you tedious morons. God save the Queen!

During the England vs. Croatia game, Piers shared several posts on the micro-blogging site before discussing the coverage of the national anthem of the United Kingdom, Great Britain, and Northern Ireland.

Ahead of football matches, players and fans sing God Save The Queen, a subtle nod of respect to Her Majesty Queen Elizabeth II.

In recent weeks, fans in their thousands have hit out at pre-game rituals, including singing God Save The Queen, an anthem that was first adopted in September 1745.

However, those who complained about the national anthem certainly left Piers furious as he enjoyed the game. 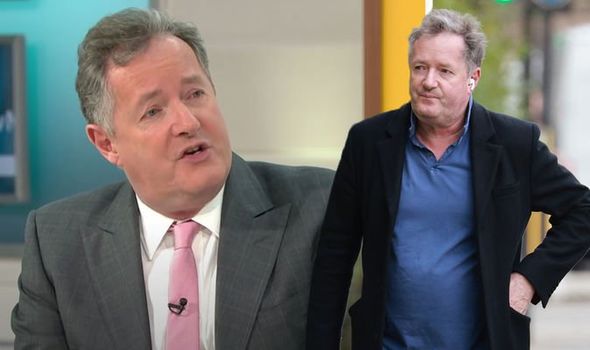 Piers Morgan has hit out at those who disagree with the national anthem (Image: ITV/GETTY) 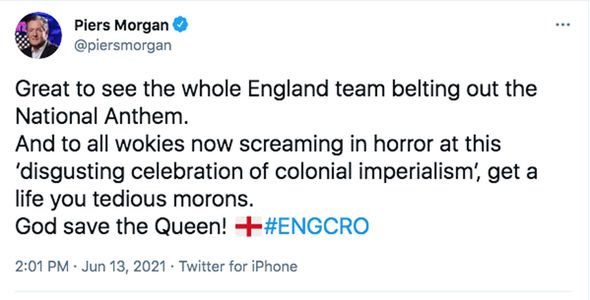 In view of his 7.9 million followers, the dad-of-four penned: “Great to see the whole England team belting out the National Anthem. And to all wokies now screaming in horror at this ‘disgusting celebration of colonial imperialism’.”

He added: “Get a life, you tedious morons. God save the Queen!”

Piers’ post, that has been liked over 3,000 times, was soon inundated with fans who shared their thoughts.

“It is great to see them belting it out,” said one. 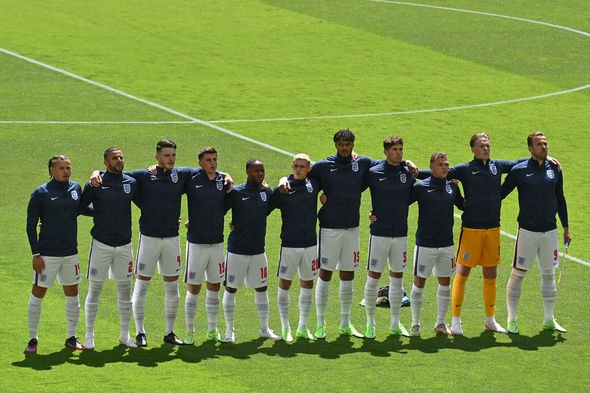 His post came after some criticised the players for singing God Save The Queen (Image: GETTY) 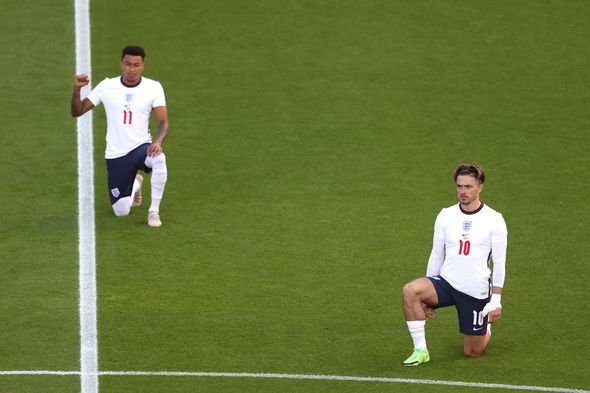 Last week, Piers was engulfed with rage after fans booed the English team for taking the knee (Image: GETTY) 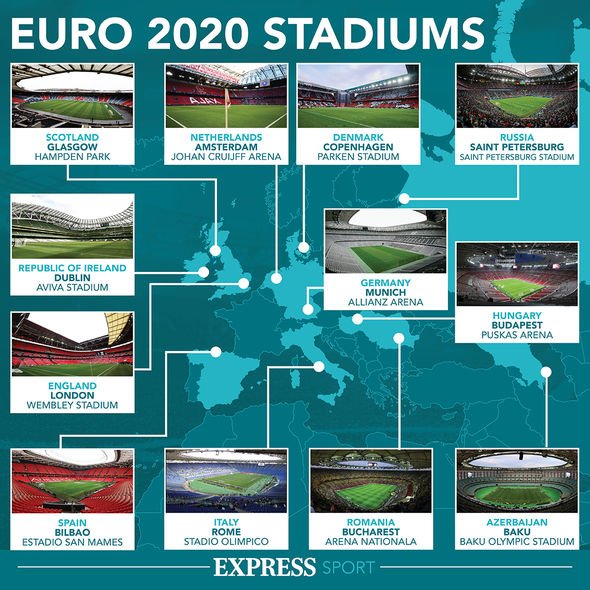 Where are the matches being held? (Image: EXPRESS)

While a second added: “Makes a change I’ve not seen an all England team sing the anthem in a long time wish them luck.”

“God save the Queen… And ALL of her family,” exclaimed a third.

Before a fourth quipped: “It was fantastic.”

Piers went on to praise those who cheered for the national team who took the knee – referencing the Black Lives Matter movement following the murder of George Floyd.

He said: “Also great to see the knee-booers drowned out by knee-cheerers.”

Before the match kicked off, Piers tweeted: “A plea to England’s boo-boys: if you don’t agree with taking the knee, then just ignore it & check your Twitter feed or pick your nose or something. But respect your team’s right to make a peaceful protest that they’ve clarified is non-political. We all want them to win, right?”

The subtle gesture, which has since become a common sight at football matches, was instantly met by boos from some fans before the rest of the fans clapped loudly to stand in solidarity with the players ahead of England’s game against Austria last week at the pre-Euro warm up.

Shortly after the match, England manager Gareth Southgate described the reaction as “a criticism of” the team’s black players.

Last week’s booing enraged Piers who tweeted: “Disgusting to hear so many supposed England fans loudly boo a team with many black players for taking the knee to protest racial inequality.”

He went on to say: “Then, loudly cheer one of those black players when he scored.

“Next time these idiots boo, the players should walk off.”

Following the booing, Gareth stood with his team and explained that taking the knee should not be seen as a political message.

During a press conference, he said: “I did hear it, it’s not something on behalf of our black players I wanted to hear because it feels as though it’s a criticism of them.”

Previous articleEngland vs Croatia: Fan in ‘serious condition’ after fall at Wembley during Euro
Next articleFrench Open: Czech Republic’s Barbora Krejcikova became the first woman since Mary Pierce in 2000 to win the singles and doubles title in the same year at Roland Garros.