Ghostbusters and Ghostbusters II have been total cult classic movies since they were released in 1984 and 1989. While Ghostbusters III: Hellbent was planned and then converted into an official video game, the original cast have not returned except for cameos in the 2016 gender swap reboot. No doubt Egon Spengler star Harold Ramis’ untimely death in 2014 will have made it more difficult to find the right way for a return to the franchise.

But now the other three original Ghostbusters in Bill Murray’s Peter Venkman, Dan Aykroyd’s Ray Stantz and Ernie Hudson’s Winston Zeddemore are back.

Jason Reitman, the son of Ivan Reitman who directed the first two movies, has helmed a spin-off sequel, which is essentially Ghostbusters III and follows the grandchildren of the late Egon.

It’s been confirmed for a while that the three surviving Ghostbusters will feature in the movie, however none of them appeared in the trailers until now.

While Ray may have answered a phone call off-screen in the previous teaser, the final trailer for Ghostbusters: Afterlife features the first look at Bill, Dan and Ernie after 32 years.

It was only their bodies, but that’s definitely Bill Murray’s voice! (Image: SONY)

The final trailer ends with Peter, Ray and Winston, from their shoulders down, in their Ghostbusters jumpsuits holding their proton packs.

While Bill Murray is heard quipping: “Hey, have you missed us?”

By the looks of things, aspects of the supernatural enemies they faced in the original movie will be returning, from the Keymaster and Gatekeeper hell hounds, to maybe even Gozer?

Whatever the case, also returning for cameos are Sigourney Weaver as Dana Barrett (Peter’s love interest) and Annie Potts as Janine Melnitz, the Ghostbusters’ secretary. 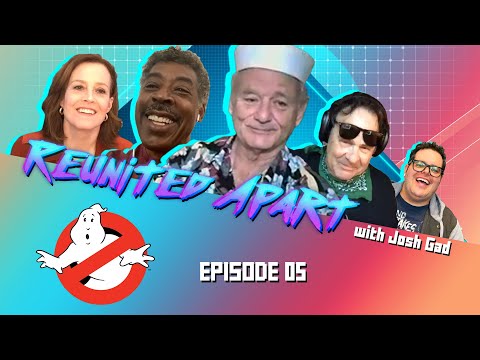 During the zoom chat, the Frozen actor asked the stars about their fond memories of working with the late Egon star and co-screenwriter Ramis.

Murray, who teared up with a tribute to his friend at the Oscars after his death, said: “He was always very kind to me, always gracious.

“He always treated me as my brother’s little brother. He never was mean to me, especially on this hard one; this was a hard movie to make.”

Ghostbusters co-screenwriter and Ray actor Aykroyd said of Ramis: “He was an incredible writing collaborator. He was not a believer in ghosts, unlike myself and my family. He was very well educated in myth and mystique.

“And such a great writing partner, because the references were there in an intelligent way and harnessed for laughter. Brilliant man, brilliant collaborator. I miss him too, obviously.”