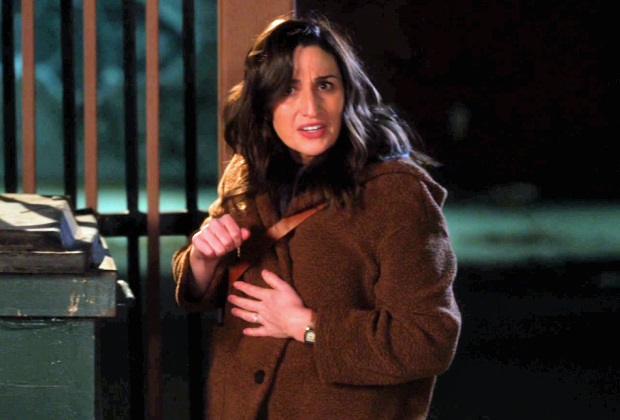 Warning: The following contains spoilers for Girls5eva Season 1, Episode 4. Proceed at your own risk!

Peacock’s new musical comedy Girls5eva had viewers doing a double-take during Episode 4, when the show’s executive producer Tina Fey popped up as… a hallucination of country music icon Dolly Parton?! The vision came about while Dawn (played by Sara Bareilles) was trying to write a song for the titular girl group. Deprived of sleep and food, Dawn was greeted by Dolly, who shepherded through a manic night of songwriting.

As surprising as the legend’s appearance was for Dawn, Fey’s cameo was also somewhat unexpected for creator Meredith Scardino, who originally reached out to the real Dolly Parton to play herself. But after witnessing the magic of Fey’s impression and her physical transformation, “I’m over the moon that Tina did it,” Scardino tells TVLine below. 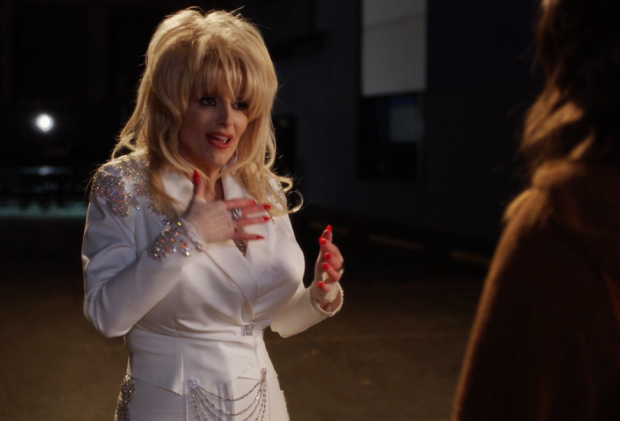 TVLINE | Can you take me back to the origins of the idea for this storyline and cameo?
We didn’t want Dawn to be like, “I’m a songwriter!” and then write an amazing song. I feel like in movies, often, there’s this stroke of genius, and then the person’s a genius forever. They just like sit there and smoke a cigarette and stare at a canvas and then have an inspirational montage, and then they’re a genius. [We wanted to] turn that on its head and give Dawn this crazy experience and have her own version of a genius montage, only to kind of fall on her face a little bit, because it’s her first time writing as a songwriter. Your first pancake, it’s never good. So we wanted to tell a story like that.

I remembered from watching, I think it was Dolly Parton on Letterman or something like that, that she sometimes fasts when she writes music. And I think another writer, Chelsea Devantez, knew that she gets up really early or in the middle of the night, and we thought, “OK, if we put these two things together, we could create this kind of fugue state for Dawn to try to emulate the greatest songwriter in the world, Dolly Parton.” The whole writers’ room, we’re all super fans of Dolly Parton, we love her. We thought, “Well, she’s hungry and she’s tired, and she’s trying her best to write Girls5eva a hit. Wouldn’t it be fun if Dolly Parton came to her?” Initially, we were like, “Let’s see if there’s any world where we can get Dolly Parton.” So we did go out to her. It just got closer and closer to shooting, and we hadn’t heard back. It’s the middle of the pandemic, and she’s in another state, and I don’t even know if the request got to her, but we did think it’d be fun if she played herself.

In the meantime, we had a table read with the character of Dolly Parton, and Tina played her in the table read, and she [was] so funny. She’s hilarious. Not a shocker that she was amazing. Tina was so good in this table read, I was like, “Would you ever do this?” and she was kind enough to do it. She also was such a great voice mimic. I thought her work was incredible. And by the way, it didn’t have to be perfect. It’s a hallucination of Dolly Parton, and we felt like that was the leeway to let someone else play Dolly Parton… I loved that Tina had a couple lines of Dolly Parton dialogue or song that would kind of get her into character before the camera rolled. She would always just go like [in a Dolly Parton accent], “Yawn and stretch,” [which] would be how she would get back into that voice. 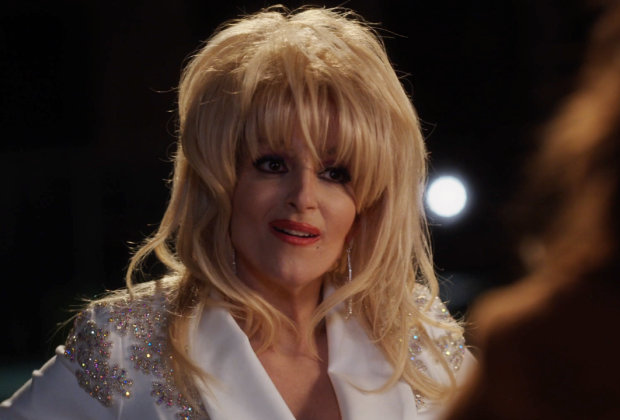 And also, a big shoutout to [costume designer] Tina Nigro, who did the outfit, and [makeup department head] Jorge [Nelson], who did Tina’s makeup. They had to kind of mess with her face a bit because they don’t look much alike. We were trying to get contacts, because Tina has brown eyes. I didn’t know this, but it’s impossible to put contacts in an actor without people measuring your eyeball and getting a doctor’s note, and [you need] people that are there to make sure that you don’t scratch or mess with an actor’s eye, which I understand. I think during COVID, it was just like a hard no that we could get contacts. But it turned out great. I’m over the moon that Tina did it.

TVLINE | As far as you’re aware, is that the first time that Tina’s done a Dolly impression? Or has she done Dolly in the past?
As far as I’m aware, that was the first time she’s done it. And then, coincidentally, a week after we shot that, Melissa Villaseñor on SNL did a Dolly Parton impression, and we were like, “What’s happening?! Everyone’s doing Dolly!”

TVLINE | When Tina came on set in that whole look, was it difficult to get through some of those scenes? Were the actors and crew just breaking and cracking up?
Yes, it was difficult to get through some of things [because] she’s so funny. Another thing that’s sort of funny is she’s in this pretty elaborate getup, but she’s still Tina Fey. She’s got producer opinions and gives you a few notes or something, looking like that, [which] was pretty funny. There was a lot of stuff that was hard to get through, but wearing a mask and a shield does keep you from distracting people with your laughter. But our actors are very good at keeping their game face on, which was impressive.

Have you already binged Girls5eva? If so, grade the season below, then hit the comments with your thoughts on Tina Fey’s turn as Dolly Parton!