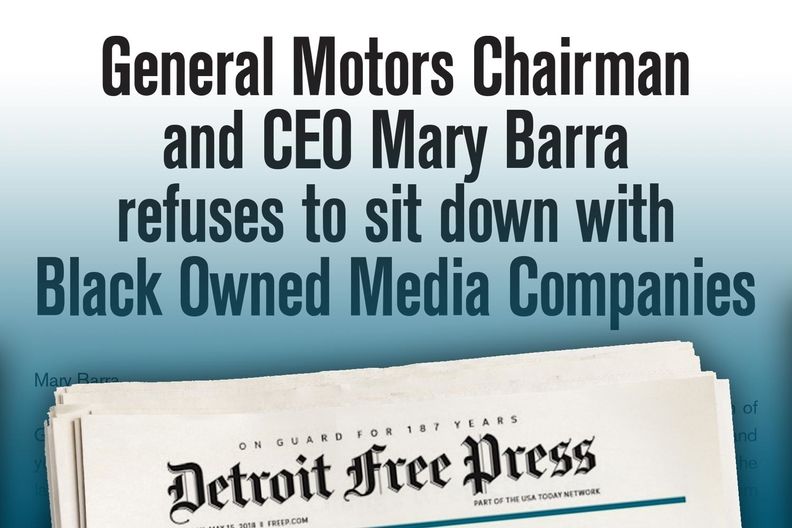 General Motors CEO Mary Barra is being called out by leaders of Black-owned media companies for refusing to meet with them.

The group of media owners — which include Byron Allen, founder and CEO of Allen Media Group; rapper and actor Ice Cube, who owns the pro-basketball league Big3, production company Cubevision and Contract with Black America; Roland Martin, CEO of Nu Vision Media; and Junior Bridgeman, owner of Ebony Media — took out a full-page ad in the Detroit Free Press on Sunday accusing Barra of ignoring multiple requests to meet, and the automaker of allocating less than 0.5 percent of their ad spend to Black-owned media. GM said that figure isn’t accurate.

“Mary, you have asked us to meet with your Chief Marketing Officer, Deborah Wahl. We have absolutely no interest in that because when Deborah was Chief Marketing Officer of McDonald’s, in our opinion, Black Owned Media was, once again, severely neglected, minimized and discriminated against. To be clear, Black Owned Media and not minority owned media, because minority includes white women and large corporations like General Motors can hide behind and tout their minority records while continuing not to do business with Black Owned Media companies,” the group writes in the ad. The ad is also expected to run later this week in The Wall Street Journal.

They are requesting a one-hour Zoom meeting with Barra and several key board members.

“Mary, we and others firmly believe that if you continue to hold the position that Black Owned Media doesn’t deserve meaningful economic inclusion and we are not worth meeting with, then you should resign, effective immediately,” the ad continues.

In response to the ad, a General Motors spokesman said: “General Motors aspires to be the most inclusive company in the world, and that includes how we allocate media spend. We have increased our planned spending with both diverse-owned and diverse-dedicated media across our family of brands. Additionally, we continue to develop and advance initiatives like the Chevrolet ‘Real Talk, Real Change’ platform and support projects like ‘More than That with Gia Peppers,’ where we’ve partnered with the National Association of Black Owned Broadcasters on a content series for Black American listeners produced and distributed by underrepresented businesses.  In this same spirit, we will continue to have an open dialogue with Mr. Allen.”

GM also called out other actions it has taken in an effort to be more inclusive, citing its membership to Free the Work, where it requires its agencies to include underrepresented directors and creators for all of its ad productions, and NNPA, a trade association of more than 200 African American-owned community newspapers.

GM also said it is committed to doubling its marketing investment with diverse media, and is on track to deliver this promise in 2021. The spokesman points to Chevrolet’s relationship with Historically Black Colleges and Universities as a sponsor of the Driving the Unexpected program and a partnership with the National Association of Black Owned Broadcasters for an urban radio initiative.

Last June, Barra also created an inclusion advisory board made up of several prominent Black leaders. And last June, GM designated $10 million to support organizations that promote inclusion and racial justice, starting with a $1 million donation to the NAACP Legal Defense and Educational Fund.

GM isn’t the only company Allen and the group are pressuring to see a change. During an interview last week, Allen said that he is calling on major marketers and their agencies to allocate at least 2 percent of their media spend to Black-owned media or face legal action. He cited Coca-Cola, among others, as brands that have historically not allocated meaningful dollars to Black-owned media.

“Diversity, equity and inclusion are core values at The Coca-Cola Company. These values extend into how we do business with our partners and ensuring we work with minority-owned businesses, including Black-owned media,” a company spokesperson said in a statement. “For years, The Coca-Cola Company has bought — and still buys — advertising space with Black-owned media businesses. We’re proud to partner with these companies and always look to increase these types of partnerships, where the media platform aligns with our business criteria and rationale necessary for purchasing advertising space…Last year, we engaged Entertainment Studios to talk about the potential of working together in the future. We are open to continuing our dialogue with Mr. Allen.”

Automotive News contributed to this report.