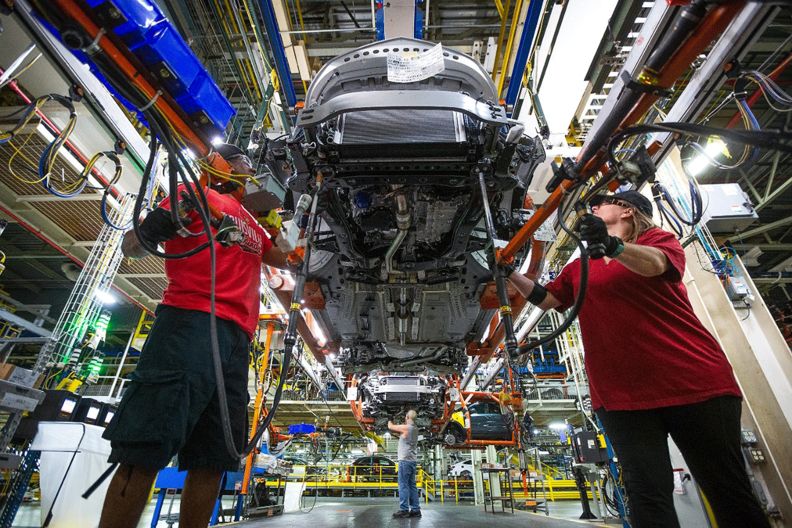 GM’s Fairfax plant in Kansas, which has been down since Feb. 8, builds the Chevrolet Malibu and Cadillac XT4.

DETROIT— General Motors on Thursday said its second-quarter financial results will be “significantly better” than executives previously projected, citing improved supplies of semiconductors and additional workarounds it has found to deal with the shortage.

GM said it plans to complete, test and ship 30,000 Chevrolet Colorado and GMC Canyon midsize pickups that had been awaiting microchips by early July. It also said “production line efficiencies” at its heavy-duty pickup plant in Flint, Mich., would allow shipments to increase by about 1,000 a month starting in mid-July.

At other plants, smaller volumes of partially built vehicles will be finished and shipped to dealerships in June and July, GM said.

“We’ve had some wins. I would expect that we would get some wins in the back half of the year,” CFO Paul Jacobson said at a Credit Suisse conference Thursday. But, Jacobson cautioned, the delivery boost doesn’t mean GM is out of the woods.

The automaker still is unable to say “unequivocally that the situation is getting better,” he said.

When it reported first-quarter earnings last month, GM said it expected to finish the first half of 2021 with about $5.5 billion in adjusted earnings before interest and taxes, including $4.4 billion earned on that basis in the first quarter.

The automaker said it now expects to easily exceed that target because of its ongoing efforts to prioritize chip usage, pull ahead some chip deliveries that had not been expected until the third quarter and engineer solutions to use its chip supplies more efficiently.

“I don’t think we necessarily like updating guidance a month after we issued it, but that shows you how fluid and volatile the situation has been,” Jacobson said.

GM expected that most of the midsize pickups waiting for chips at its plant in Wentzville, Mo., plant would clear out by the end of the year, but the automaker was able to pull ahead some chip production scheduled for the third quarter, Jacobson said.

Challenges will continue into the third quarter, he said, but normalization in 2022 is possible.

The chip shortage will continue to affect production at plants in North America, Asia and South America through June and July, GM said.

It said full-size pickup production that’s scheduled to begin in the fourth quarter at Oshawa Assembly in Canada will help improve supplies of the Chevrolet Silverado and GMC Sierra in 2022.

As of Friday, GM had lost 272,292 vehicles from its North American production schedule because of the chip shortage, according to AutoForecast Solutions.

GM hinted at the start of a recovery last week when it outlined restart plans for nearly all of its assembly plants.

GM last week said only one plant — Fairfax Assembly in Kansas — would remain down because of the chip shortage beyond July 5. Fairfax, which has been down since Feb. 8, builds the Chevrolet Malibu and Cadillac XT4. CAMI Assembly in Ontario, which builds the Chevy Equinox and also shut down Feb. 8, is scheduled to reopen June 14 but pause for a previously scheduled two-week summer break in July.

The plant in Wentzville went offline last week until mid-July for a model-year changeover.

Previous article‘The Conjuring 3’ Is Based on This Haunting Murder Trial Involving a Demonic Possession
Next articleSamantha Akkineni Receives Love From The Family Man 2 Fans Ahead Of Release, Trend #WeSupportSamantha