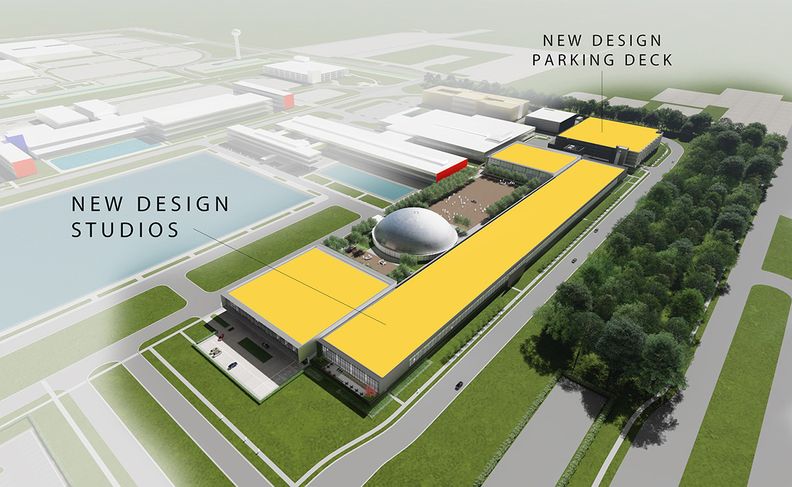 DETROIT — General Motors plans to increase design space by 30 percent at its Global Technical Center in Warren, Mich., with a new building scheduled for completion in 2023.

“This is really going to be designed as a collaboration space to bring not only our creative designers into the studios, but all of the cross-functional team members that we work with, so that we can have a great space for everyone to come together and work faster and smarter with more technology and a lot of new efficiencies,” McBride told Automotive News.

Many of GM’s designers returned to the Warren campus in May, following GM’s coronavirus protocols, but they can’t fit under one roof. Teams are scattered throughout the Warren campus, he said. The addition of Design West will create a central design campus within the Tech Center.

The building will wrap around GM’s acclaimed Design Dome and connect to the existing Saarinen design center.

GM began installation of the first steel beams this week. The new 360,000-square-foot facility will have two levels and an open floor plan, giving designers in studio spaces a view of the production area on the main floor from their stations, said Melinda Gray, GM Design’s group manager of special projects.

The facility will also have high-speed milling equipment and new visualization technology.

Design West will help the automaker implement its EV strategy, but it will be used to design GM’s entire U.S. portfolio, said McBride. GM has said that it aims to have an all-electric light-vehicle lineup by 2035.

The new space will add “ease of use as we interface with different screens throughout,” said Gray. “We are just enabling flexibility immensely through the integration of technology.”

Design West construction was put on hold in 2018 as part of GM’s restructuring plan and pushed to 2020. It was delayed again in 2020 because of the coronavirus pandemic.

Previous articleFIFA World Cup 2022 Qualifiers: Germany cruised to a 3-0 win over Iceland on Thursday to get their 2022 World Cup qualifying campaign off to a winning start.
Next articleAfter incidents of torture and rape. Abi Ahmed: Eritrea’s army will withdraw from Tigray